With the captain of the wrecked bulker Wakashio due to make his next court appearance on September 1, the Maritime Union of India issued a call for improved treatment and a fair trial for the captain. This comes as Mauritius continues to address questions regarding the incident.

The captain of the Wakashio and his chief officer were both officially detained and later arrested in Mauritius in mid-August after their ship, the bulk carrier Wakashio, ran aground on the island on July 25 and later began leaking oil. Captain Sunil Kumar Nandeshwar made his last appearance before the District Court of Port-Louis on Tuesday, August 25, and his next scheduled appearance is tomorrow. He is being charged with endangering safe navigation and based on the seriousness of the charges has been held in jail without bail. If found guilty, media reports say he is facing up to 60 years in prison.

The Maritime Union of India is now speaking out on his behalf seeking support for a fair trial as well as to improve the conditions of the captain’s detainment in Mauritius. Writing to the Shipping Ministry of India, Mauritius Government, High Commission of India in Port Louis, High Commissioner and Deputy Commissioner of Mauritius in India, Office of Mauritius Attorney General, Mauritius Police, Mauritius-based Maritime Transport and Port Employees Union, and all relevant offices in Mauritius and India, the union said the captain had an incident-free career spanning over 40 years. They said he has served as master for approximately 25 years completing over 100 global voyages. 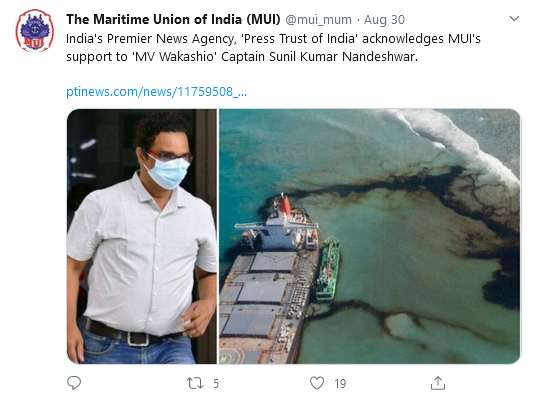 "MUI's communication has requested these bodies to investigate the arrest of Captain Sunil Nandeshwar in Mauritius and conduct his judicial trial in the local court abiding the guidelines laid by the International Maritime Organization and without bowing to any political, governmental or corporate pressure," the statement said.

MUI also demanded that the captain be permitted to communicate with his family members and with his shipping company managers to ensure that he can be defended in the Mauritius Court. "A decent accommodation should be provided to him instead of lodging him in detention till the local court pronounces his bail," added the MUI General Secretary Amar Singh Thakur.

The union’s actions come as Mauritius’ prime minister Pravind Kumar Jugnauth, on Friday, August 28, replied to Private Notice Questions at the National Assembly, in Port Louis. The prime minister indicated that inquiries are currently being conducted by special investigation teams at the level of the Central CID and that under the Merchant Shipping Act, a preliminary inquiry has been instituted by the Director of Shipping. He expects that a Court of Investigation will be instituted.

Responding to specific questions, he reported that the National Coast Guard (NCG) Operations Room had begun tracking the Wakashio on July 23, two days before the grounding. The NCG first tried to make contact at 6:15 p.m. on July 25, approximately five minutes after it entered the country’s territorial waters and called out to the ship five times before the vessel went aground at 7:25 p.m. Media reports say that it was not until 8:10 p.m. that the captain spoke to the NGC saying he had lost control of the vessel.

Responding to questions about the oil spill the prime minister cited the Lloyds Standard Form of Salvage Agreement entered into between the vessel owners, Okiyo Maritime Corp, an affiliate of Nagashiki Shipping Co., and SMIT Salvage Pte Ltd. Under the agreement, the prime minister said “the salvage team is responsible to salve the vessel and take the vessel to a place of safety,” and obliged to prevent or minimize damage to the environment. The prime mister said they took their advice from the salvage team and the range of international experts assisting Mauritius.

“Our country has been confronted with an unprecedented oil spill following the wreck of MV Wakashio. The concerned authorities took all appropriate actions within our existing resources and assistance from international organizations and friendly countries, to contain and mitigate the adverse effect of this casualty,” the government said.

The government has also instructed the Special Casualty Representative, who represents the interests of the insurer, that the dismantling of the aft section should be completed by November 1, prior to the forthcoming cyclonic season.