The sub was commissioned administratively on April 4, 2020, but it was under way and underwater at the time. Pandemic-era restrictions on social distancing prevented a proper commissioning ceremony, and it was put into service without formalities; instead, it became the first U.S. Navy vessel ever commissioned while submerged.

Saturday’s ceremony provided Delaware with a traditional commissioning, and the date - almost exactly two years after her initial "commissioning" - commemorated the vessel's entry into service.

President Biden attended the ceremony, reflecting his deep ties to the state of Delaware, which he represented it for 36 years in the U.S. Senate. "This latest Navy ship to carry the Delaware name is part of a long tradition of serving our nation proudly and strengthening our nation’s security," President Biden said. "Not just us, but our allies and partners around the world as well."

As the ship's sponsor, Dr. Jill Biden performed the traditional honor of calling for the crew to man the ship and “bring her to life." 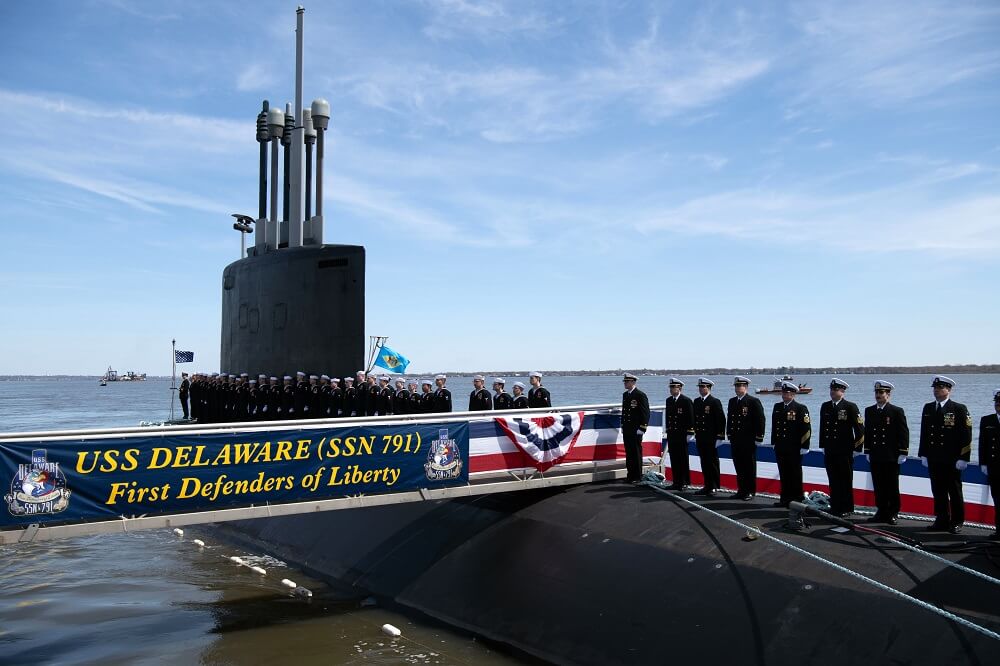 “This vessel will always uphold the First State’s motto of ‘Liberty and Independence,’” she said. “It’s difficult to put into words what it means to be a part of the USS Delaware family. It’s an incredible honor that I take seriously. I’ve seen the heart of this crew and it makes me proud and humbled to be your shipmate for life.”

Delaware is the last of the Virginia Block III series of nuclear-powered attack subs. The revision is characterized by a new bow and an advanced sonar array. The Virginia class is expected to be the backbone of the Navy's attack-sub fleet into the second half of 10 more Block IV subs are on order, with three delivered and seven under construction, and 10 Block V stretched Virginia-class subs were ordered in 2019-21. The Block V will bring additional land-attack capability thanks to the new Virginia Payload Module (VPM) mid-body section.