The U.S. Coast Guard reported that its search is ongoing for the missing crew from the capsized liftboat the Seacor Power. The search continues to be hampered by bad weather, but divers have continued their efforts. At the same time, they reported that they have recovered the bodies of three additional crewmembers of the vessel.

A Coast Guard helicopter spotted one body yesterday, April 15, in the evening and determined that the person was unresponsive. Local media reports said the body was found approximately 30 miles from the capsized vessel. The crew of the Coast Guard Cutter Benjamin Dailey, also in the area searching, later recovered the unresponsive person and transported him to Coast Guard Station Grand Isle where a coroner pronounced the man deceased.

Today, commercial divers from Donjon Marine located two additional bodies of crewmembers. As of Friday evening, four persons who died in the accident have been recovered along with six survivors.

Out of respect for the privacy of the family members involved, the Coast Guard is not releasing the names of the men recovered or the others mariners involved in the incident. The media in Louisiana reported that the first body recovered was that of the ship’s captain and the second was a member of the crew.

Divers returned to the scene at 7:50 a.m. Friday to conduct an assessment and began dive operations. The divers, however, had to resurface mid-morning due to dangerous weather conditions. They resumed diving again around 1:30 p.m. on Friday afternoon and the Coast Guard expects that Donjon's dive operations will continue throughout Friday evening, weather permitting.

"Our deepest sympathy goes out to the family, friends and loved ones of everyone involved in this tragic incident," said Capt. Will Watson, commander of Coast Guard Sector New Orleans. "We are using every asset available to us to continue our search efforts."

The search is looking for nine additional members of the crew still missing. The Associated Press is reporting that the Coast Guard was in contact with three survivors via radio on the night of April 13 after the vessel capsized eight miles off the coast of Louisiana. Bad weather was hampering efforts to reach the individuals. The Associated Press is citing a Coast Guard spokesperson as saying that one of the individuals fell into the water but that the other two reported they were going back inside the capsized vessel for safety. They have not been heard from since then. 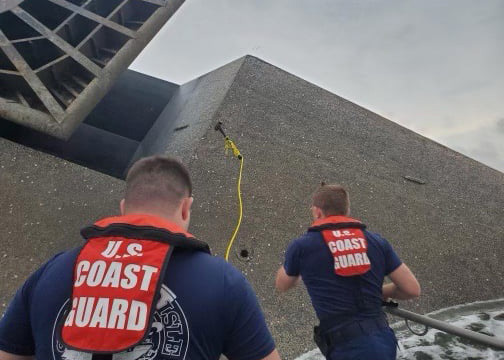 Yesterday, searchers tried banging on the hull of the vessel but reported that they did not hear any responses from inside. However, they noted that they were trying to hear over the wind and noise of the motor of their vessel.

Families of the missing crew have been holding out hope that there might have been air pockets inside the vessel which is partially submerged in up to 50 feet of water. The families said they are receiving twice-a-day briefings from the Coast Guard and local officials.

At the last report, that Coast Guard said that the search involved four cutters, rescue boats from Grand Isle station, multiple helicopter crews and search airplanes, as well as resources from Louisiana authorities.