Wildlife authorities in East Java have seized hundreds of plastic baskets crammed with 2,711 live native birds of various species from a passenger ship docked in the port of Tanjung Perak in Surabaya, Indonesia.

Officers from the Natural Resources Conservation Agency of Indonesia (BBKSDA) of East Java have also arrested a person suspected to have purchased the birds from collectors in Kalimantan and smuggled them on board the passenger ship.

That bird market, one of Indonesia’s largest, came under the spotlight in September after a TRAFFIC report revealed the sale of thousands of wild caught native birds in Jakarta markets over a three day period. The survey documented a total of 16,160 birds in Pramuka on just one day in 2014. 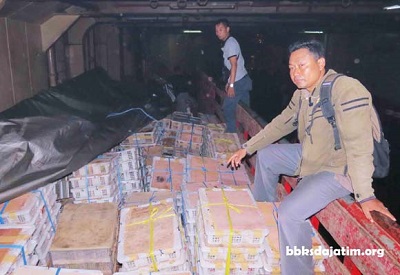 The latest shipment on KM Mahkota Nusantara included 1,411 Greater Green Leafbirds, 712 White-rumped Shamas and 557 Hill Mynas. Several of the species are on the list of 28 priority species for conservation action identified during the Asian Song Bird Trade Crisis Summit. The myna is traded for its ability to mimic, and others are traded for their melodious songs and are used in bird singing competitions.

“It is heartening to see action against the illegal and unsustainable trade in songbirds being prioritized in Indonesia now,” said Dr Chris R. Shepherd, Regional Director for TRAFFIC in Southeast Asia.

“TRAFFIC congratulates BBKSDA East Java on the find, and for their continued vigilance that has led to a string of similar seizures at Tanjung Perak port in recent months.”

On November 11, 200 Greater Green Leafbirds, of which 25 had died, were seized at the same port.

The day before, 1,014 birds were seized on another passenger vessel arriving from Banjarmasin, South Kalimantan. A high-profile seizure from May 4 of 24 Yellow-crested Cockatoos stuffed in plastic water bottles also took place at Tanjung Perak.

“The large numbers of birds being seized, and the continuing open availability of these birds in markets such as Pramuka, indicates high levels of smuggling that is of great concern,” said Shepherd.

Authorities in East Java are working with counterparts in East Kalimantan to return the birds to the wild as soon as possible.