A third former cruise ship that sailed for the UK's Cruise and Maritime Voyages is heading to the scrap yard. The Magellan, built in 1985 for Carnival Cruise Lines, departed the anchorage near Oman in the Persian Gulf today under the names Mages heading east to India, where she is expected to arrive at the end of the week.

Popular in the UK market due to her smaller size, the 46,000 gross ton Magellan, which accommodated 1,400 passengers. had been sailing for the past five years for CMV. She had been the start of an effort to modernize the CMV operation that later saw the company buy additional ships from Carnival Corporation. She was laid up in Bristol, England along with other CMV cruise ships when the cruise industry paused operations in the spring of 2020. Unlike her fleet mates, the Magellan, however was the only one of the cruise ships having sailed for CMV that was not detained for safety violations by the British authorities, but she too was sold at auction after CMV was placed in administration last summer.

The Magellan was acquired during the auction of CMV’s former cruise ships by the Greek company Seajets, which is believed to be making an asset play buying up surplus older cruise ships. Seajets paid just over $3.4 million for the Magellan, a ship that analysts had estimated would normally have sold for more than $8 million. The Magellan left England in December, first stopping at Malta and then heading through the Suez Canal to the Persian Gulf. It was rumored that Seajets was hoping to find work for the ship as an accommodation ship. However, with the cruise industry remaining on pause, costs are reportedly mounting for Seajets after having acquired cruise ships from Carnival Corporation as well as the Columbus also formerly sailing for CMV. Not having found a charter for the Magellan, Seajets has reportedly sold her for a profit to the Indian scrappers.

The Magellan marks the third cruise ship that had operated by CMV to be sold for scrap. The Astor, built in 1987, at 20,000 gross tons was the first former CMV cruise ship to arrive at the scrap yards in Turkey. The Marco Polo, a historic passenger ship built in 1965 for the Soviet Union, had also sought work possibly as an accommodation ship before being beached in India in the beginning of January. 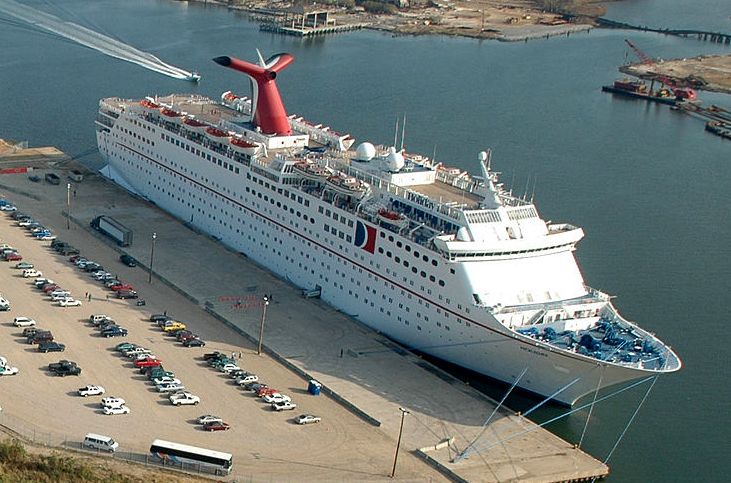 Built in 1985, she sailed till 2009 for Carnival Cruise Line as the Holiday (FEMA photo)

Built in 1985, the Magellan was one of the first cruise ships built by Carnival Cruise Line as they began to expand their operations. Named Holiday, she was a larger version of Carnival’s first newly built cruise ship the Tropicale. Shortly after the Holiday entered service, she was followed by two near sister ships the Jubilee and Celebration, with the four ships leading Carnival's 7-day cruises and driving the growth of the company.

The Holiday continued to sail with Carnival for 24 years before being sold in 2009 to a new Carnival joint venture called Ibero Cruises. She was modernized and refurbished before commencing service sailing in Europe marketed in Spain as the Grand Holiday. She operated for just four years in the Spanish market before Carnival decided to end the Ibero Cruises brand. Having been recently refurbished, CMV was pleased to acquire the ship for its fleet.

In an odd twist of fate brought on by the effects of the pandemic, when the Magellan arrives in India, she will not only be joining the former Marco Polo, but she will also be scrapped alongside her former Carnival Cruise Line running mates. Late last year, Bahamas Paradise Cruise Line sold the former Celebration also for scrapping in India. The former Tropicale, which had been operating as the Ocean Dream for the Japanese NGO Peace Boat, also recently arrived at the breakers in India. Three of the ships that made up Carnival’s growth in the late 1980s and remained popular for many years will all be ending their careers at the same time on the breach in India.