Harnessing the power of the wind continues to be one of the technologies shipping companies are testing for future generations of ships. Some of the efforts are looking at traditional sailing or wind assistance as a propulsive force while others are seeking to harness wind energy as a source of stores power for vessels. Two test projects are proceeding to demonstrate the potential of wind energy for future ships.

Japan’s Mitsui O.S.K. Lines undertook the first tests of a program called Wind Hunter working along with a broad collaboration of Japanese organizations including ClassNK and academic institutions. Demonstration voyages were conducted using a sailing yacht, the Winz Maru, in Sasebo-city, Nagasaki in Japan.

During strong winds, the yacht sailing with the wind used the energy to generate electricity. Using an underwater turbine, the system produces hydrogen in an electrolyzer and stores the hydrogen onboard. When the wind is weak, the stored hydrogen is used at hydrogen fuel cells to generate electricity to rotate the propeller. MOL reports that five experimental sailings were conducted and a series of cycles successfully demonstrated from the power generation by ocean wind to hydrogen production and storage, and fuel cell power generation used for propulsion by supplying electricity to the motor to drive the propeller.

The goal of the project is to complete the first stage of the testing, including accumulating and analyzing navigation data, to verify the performance characteristics of various equipment and the efficiency plant. These tests are scheduled to conclude by March 2022 and then they envision moving on to a larger 197-foot-long vessel by 2024. The goal is to have the system operational on a large ship by 2030. 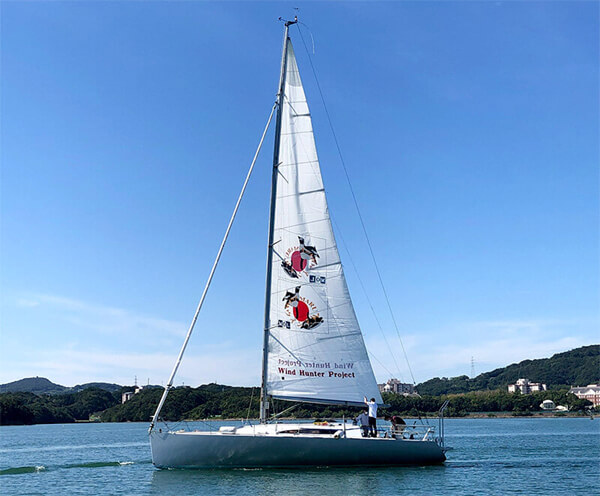 Sailboat used for the first test of the Wind Hunter (MOL) 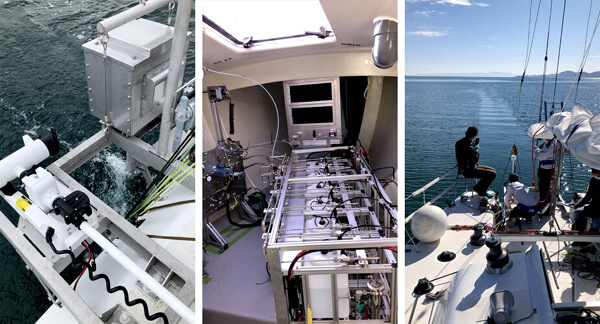 Separately, in Europe, the next phase of monitoring and evaluating wind-assist equipment is launching as part of the WASP (Wind Assisted Ship Propulsion) project. The goal of the project is to bring together universities and wind-assist technology providers with ship owners to research, test, and validate the operational performance of a selection of wind propulsion solutions.

Recently, the installation of two retractable wing sails was completed on a shortsea vessel operating between the Netherlands and the U.K. The 289-foot long Tharsis, operated by Tharsis Sea-River Shipping, was fitted with the units supplied by eConowind, which each measure approximately 10 feet by 29.5 feet. The wing sails can be folded into a specially designed storage unit and when in use they employ self-adjusting technology to maximize their efficiency in coordination with the vessel’s diesel-electric drive.

The installation of the wing sails was completed at the Neptune Shipyard near Rotterdam. The 2,364 dwt vessel was also fitted with an air lubrication system for its hull in 2020. That system was also upgraded during the recent drydocking.

“With this installation operating in both river and North Sea routing with varying winds we are eager to see how the rigs perform, especially with the unique combination of this self-adjusting technology in combination with a modern diesel-electric drive,” says Frank Nieuwenhuis, CEO of eConowind.

Over the next few years, Tharsis Sea-River reports the system will be tested and optimized as part of the WASP project. The expectation is that it will serve as an example of how wind assistance can help the shortsea shipping sector. 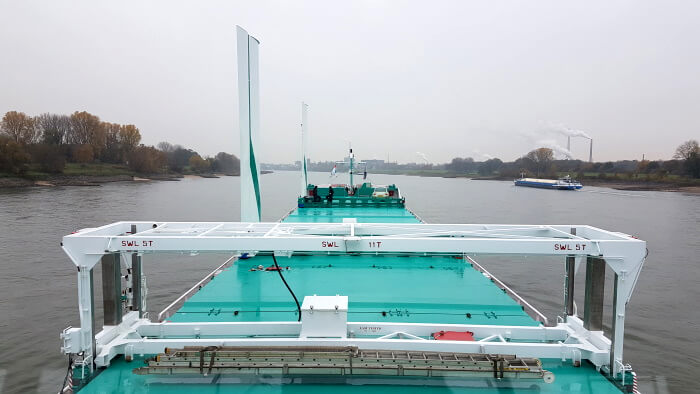