A bulk carrier and a chemical tanker both departing a port in northwest India on November 26 were involved in an accident which Indian officials are saying was likely due to a “navigational error.” None of the crew aboard either vessel was injured and there were no reports of an oil leak, but the damage was extensive with the vessels remaining interlocked while salvage teams assessed the damage and develop a plan.

The Indian Coast Guard received reports of the collision approximately 12 nautical miles outside the port of Kandla in the Gulf of Kutch at approximately 9:30 pm local time. They dispatched two interceptor boats along with a pollution control vessel to monitor the situation. A helicopter later joined the survey to look for further signs of an oil leak.

"Two merchant vessels, MV Aviator and MV Ancient Grace have collided with each other in Gulf of Kutch,” the Indian Coast Guard reported in its briefing. Based on their preliminary investigation, they reported “it appears the collision took place due to navigational error. Indian Coast Guard is monitoring the situation for preventing any possible oil spill.”

The 49,999 dwt chemical tanker Atlantic Grace, registered in Hong Kong, was outbound on a return voyage to Fujairah, UAE. The vessel had a crew of 21 Indian nationals aboard. The vessel was traveling in ballast and photos indicate that it struck the bulker midship port side in the number three cargo hold.

The bulker, the 14-year-old Aviator, registered in the Marshall Islands reportedly had earlier departed the port for the anchorage. It is unclear if the 18,975 dwt bulker, which was empty, had reached the anchorage or was still maneuvering at the time of the accident. She has a crew of 23 believed to be from the Philippines. 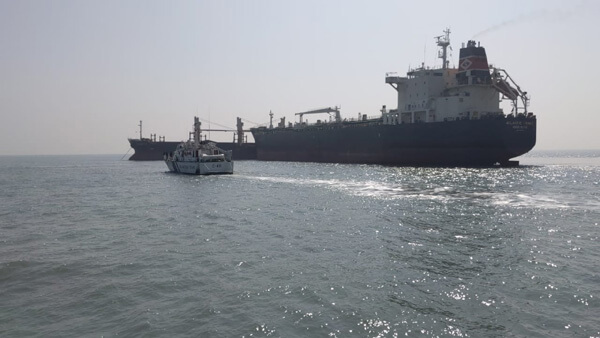 “We will need tugs to conduct the salvage operations,” local officials told the media in a briefing. “This is a delicate operation conducted mid-sea where we have to ensure there is no further damage to the hull or the vessel does not tilt.” They however noted that the hull breach had occurred above the waterline so there was no immediate danger of the bulker sinking.

The Indian Coast Guard reported that both vessels would be detained while the investigation was ongoing. Subsequent reports indicate that they were successful in separating the two vessels.