The world’s first large international shipment of liquid hydrogen is on its way to Japan as the next step in the demonstration project Hydrogen Energy Supply Chain pilot project (HESC) organized between Japan and Australia. The departure of the specially designed ship carrying the hydrogen is viewed as the next milestone in a project that seeks to demonstrate the world’s first fully-integrated hydrogen supply chain while providing the information to access the feasibility of scaling up to full-scale operations.

The Suiso Frontier, a 380-foot-long vessel, was built by Kawasaki Heavy Industries in Japan as part of the project which seeks to transport liquefied hydrogen at 1/800 of its original gas-state volume. The vessel was launched in 2019 and underwent extensive testing before departing Japan in December 2021 and arriving in mid-January in Australia.

“We are very happy with how things have progressed at Hastings,” said Hirofumi Kawazoe, Hydrogen Engineering Australia’s General Manager. “We have successfully completed all safety, technical and operational aspects of the loading of liquefied hydrogen.” The HESC team reports it was able to test and validate the loading of liquefied hydrogen into the Suiso Frontier’s specially built vacuum-insulated tank.

The hydrogen gas, which is produced from Australian brown coal (also known as lignite) and biomass via gasification was transported by truck to a liquefaction and loading terminal at the Port of Hastings, Australia. There it was cooled to -253 degrees Celsius at the Hastings hydrogen liquefaction plant and then transferred to the purpose-built tank aboard the Suiso Frontier. The vessel, which is reported to be carrying about 70 percent of its maximum capacity of approximately 75 tons of liquified hydrogen, maintains the liquefied hydrogen at the required temperature throughout the voyage. 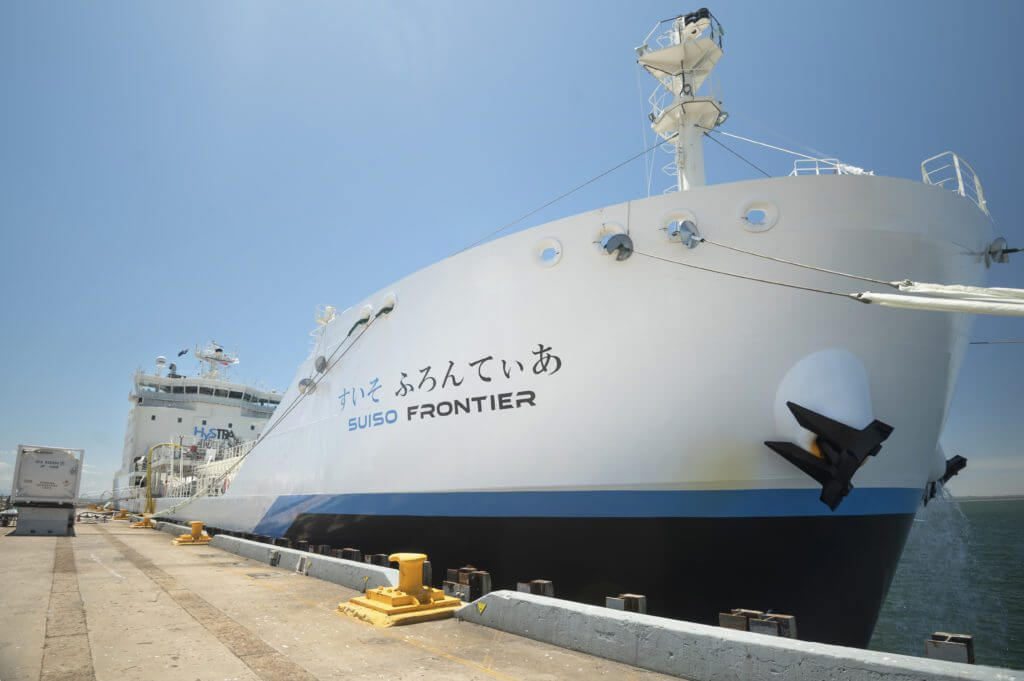 Suiso Frontier during the loading process in Australia (HESC)

Critics point out that the hydrogen is being produced through the use of fossil fuels. HESC, however, says that carbon offsets have been purchased to mitigate emissions from the pilot. Further, in the commercial phase, carbon dioxide would be captured during this process and stored deep underground or possibly be recycled for industrial use while also optimizing energy efficiency in the HESC supply chain.

The vessel departed Australia during the evening on January 28 for its return journey to the Port of Kobe in Japan. The Suiso Frontier is expected to arrive back in Kobe in mid to late February. Once she arrives in Kobe, the team will unload the liquefied hydrogen into a purpose-built storage tank onshore, similar to that utilized onboard the Suiso Frontier.

The next phase of the project will involve the HESC Project Partners undertaking analysis of the pilot’s learnings with the intent of moving to a commercial scale project in the mid-to-late 2020s. The goal of the Japanese-Australian partnership is to reach a commercial stage where 225,000 tons of liquefied hydrogen is produced.