Members of the South Korean military were called out to drive tractor-trailer trucks in an effort to keep containers moving as talks in the week-old truckers’ strike broke down. Government and industry are calling on the truckers to return to work as reports grow over the impact on South Korea’s economy, manufacturing and ports.

The military working with the Ministry of Transport assigned members to begin driving the trucks. According to a report on Reuters, some 100 cargo trucks being driven by the military are being used to move containers in and out of the major ports. They are trying to help elevate space problems for manufacturers and at the ports as 6,600 or more unionized truck drivers remained off the job for a seventh day. Pictures showed police lines also guarding the roads to prevent the strikers from attempting to interfere with the trucks.

The fourth round of talks between the union and the government collapsed on Sunday after some reports indicated that they were near a tentative agreement. Korean media is saying that the ministry had committed to bringing up the strikers’ demands in the legislative process if the drivers agreed to go back to work. They after demanding an extension on a minimum wage program launched during the pandemic but due to expire this December. Media reports indicate that the shipping industry is strongly opposed to the extension of the minimum wage program. 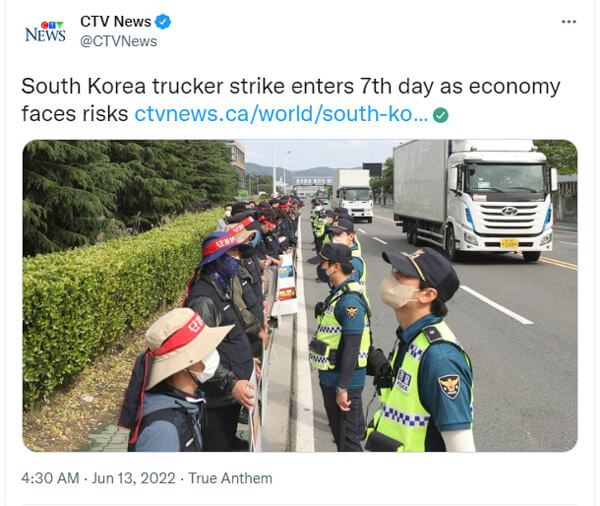 Government officials said on Monday that the strike has already caused more than $1 billion in damages. They reported that car manufacturers did not produce 5,400 vehicles last week confirmed by Kia Motors which said it has begun suspending production at some plants. Today South Korea’s largest steel manufacturer, POSCO also said it was now beginning to suspend operations at some of plants for an undetermined period of time after last week's warning of delays in shipments of some steel and semi-finished products. The government estimates that 450,000 tons of steel scheduled for deliveries last week failed to ship because of the strike.

So far, the government however says that the impact has been limited to South Korea’s domestic industries. Yet the ports continue to report a dramatic fall in their volumes leading to fears that the lack of shipments will quickly impact global industries. South Korea is a major semiconductor manufacturer. Experts fear the shocks could quickly spread across the global supply chain.

Industry officials said they believed some companies had stockpiled raw materials and supplies in the weeks leading up to the strike. A collation of 31 industry associations however joined with the government calling for an immediate end to the strike, Reuters is quoting a statement from the groups saying the unions were taking an extreme tactic by lengthening the strike “holding national logistics as a hostage.”

Strikers have now appeared at 14 different locations across the country the Transport Ministry said on Monday. The demonstrations remain peaceful with the police warning they would arrest strikers for illegal actions including any effort to block non-union drivers from continuing to work. The union said on Monday it planned to demonstrate at the Hyundai facilities in Ulsan as it calls for the government to take a more active role to ensure their wages and provide for enhanced work conditions.