Ships in Baltic and Black Sea Monitored by Drones from EMSA

The European Maritime Safety Agency (EMSA) expanded its drone monitoring program for ship emissions into the Baltic region as well as in support of coast guards in the Black Sea. The program uses specially outfitted drones that can measure emissions as well as provide 24-hour monitoring services and track ship movements.

Last summer, EMSA worked with the Danish Maritime Authority and France’s Ministry of the Sea on programs to test emissions on vessels operating inside the North Sea Sulfur Emission Control Area (SECA), where tighter pollution rules apply. Ships navigating in this area are required to use fuel with a sulfur concentration not greater than 0.1 percent versus the limitation in other areas of 0.5 percent.

The new program, which is scheduled to run till late June 2021 was implemented at the request of the Environmental Protection Department of Lithuania’s Ministry of the Environment. Offered free to all EU Member States by EMSA, the program has been developed to assist in ship emission monitoring and maritime surveillance operations and can operate in all seas surrounding the European Union.

EMSA is providing its Remotely Piloted Aircraft System (RPAS) services working with local authorities to protect the marine environment and improve maritime safety. The RPAS is being used to calculate the sulfur content of the fuel being used by the passing ships. Sensors on board the RPAS will measure the emissions from the exhaust plumes of vessels traveling in the main shipping lanes and when at anchorage around the Lithuanian port of Klaipeda.

All the information is transmitted in real-time to trained users through EMSA’s RPAS Data Center. Records of the emission measurements are encoded automatically into the THETIS-EU information sharing system. This system is operated by EMSA to assist in the enforcement of the EU sulfur directive as well as to support port inspectors when targeting vessels to be inspected.

In addition to the RPAS unit, Lithuania’s Environmental Protection Department reports that it will also be working in collaboration with other Lithuanian authorities, including the Navy, MRCC, and fisheries control services, to conduct other types of maritime surveillance missions. 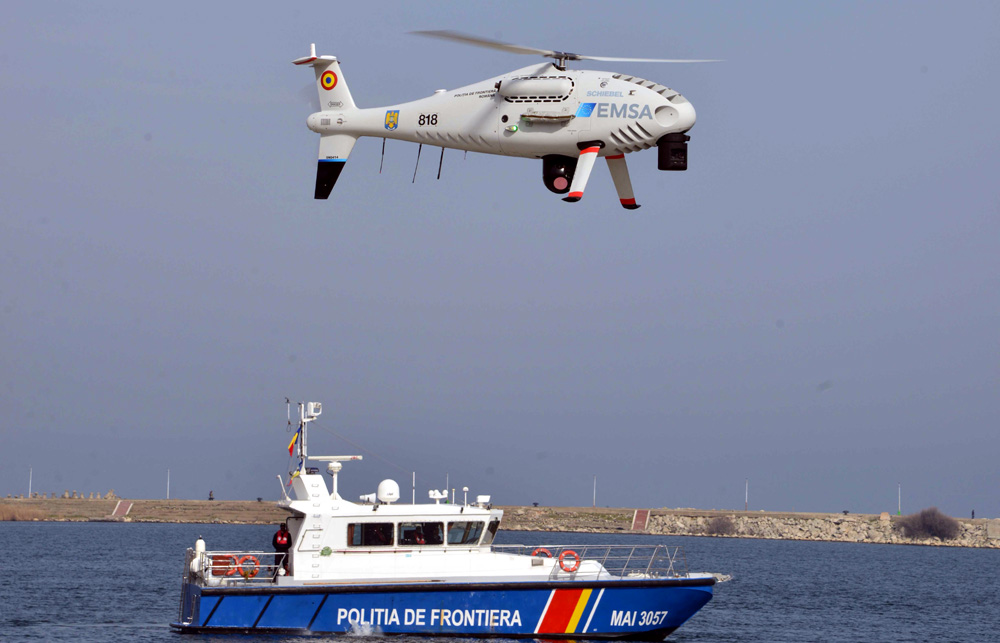 The aircraft used in this project are the Schiebel CAMCOPTER S100, which is under contract to EMSA via a consortium led by Nordic Unmanned AS. The model is a vertical take-off and landing drone and is fitted with gas sensors and cameras covering optical and infrared spectral ranges to better detect vessel plumes and conduct maritime surveillance.

The RPAS system will also be used to support a number of authorities in the Black Sea area, including the Romanian Naval Authority and National Agency for Fishing and Aquaculture. According to EMSA, this drone will be equipped with a camera capable of day and night operations, a sea surface scanner, a distress beacon detector, and a sensor that can detect vessel positions. It can be used for a range of activities, including border control, monitoring naval traffic, search and rescue, and environmental protection. This program is scheduled to run for six months.

EMSA offers these services to member states individually and as part of EMSA’s regional RPAS strategy, which allows multiple coast guard functions in several EU Member States to be supported by one or more RPAS services. EMSA says that further expansion of RPAS is planned regionally in 2021 and 2022.