A new study mapping lightning around the globe finds lightning strokes occur nearly twice as often directly above heavily-trafficked shipping lanes in the Indian Ocean and the South China Sea than they do in areas of the ocean adjacent to shipping lanes that have similar climates.

The difference in lightning activity can’t be explained by changes in the weather, according to the University of Washington study. The researchers conclude that aerosol particles emitted in ship exhaust are changing how storm clouds form over the ocean. Water vapor condenses around aerosols in the atmosphere, creating droplets that make up clouds. The particles make cloud droplets smaller, lifting them higher in the atmosphere. This creates more ice particles and leads to more lightning, because storm clouds become electrified when ice particles collide with each other and with unfrozen droplets in the cloud. Lightning is the atmosphere’s way of neutralizing that built-up electric charge.

The results provide some of the first evidence that humans are changing cloud formation on a nearly continual basis, rather than after a specific incident like a wildfire, according to the authors. Cloud formation can affect rainfall patterns and alter climate by changing how much sunlight clouds reflect to space.

“It’s one of the clearest examples of how humans are actually changing the intensity of storm processes on Earth through the emission of particulates from combustion,” said lead author Joel Thornton, a University of Washington professor of atmospheric sciences.

Co-author Katrina Virts, now an atmospheric scientist at NASA Marshall Space Flight Center, was analyzing data from the World Wide Lightning Location Network, a UW-based network of sensors that locates lightning strokes all over the globe, when she noticed a nearly straight line of lightning strokes across the Indian Ocean.

Virts and her colleagues compared the lightning location data to maps of ships’ exhaust plumes from a global database of ship emissions. Looking at the locations of 1.5 billion lightning strokes from 2005 to 2016, the team found nearly twice as many lightning strokes on average over major routes ships take across the northern Indian Ocean, through the Strait of Malacca and into the South China Sea, compared to adjacent areas of the ocean that have similar climates. 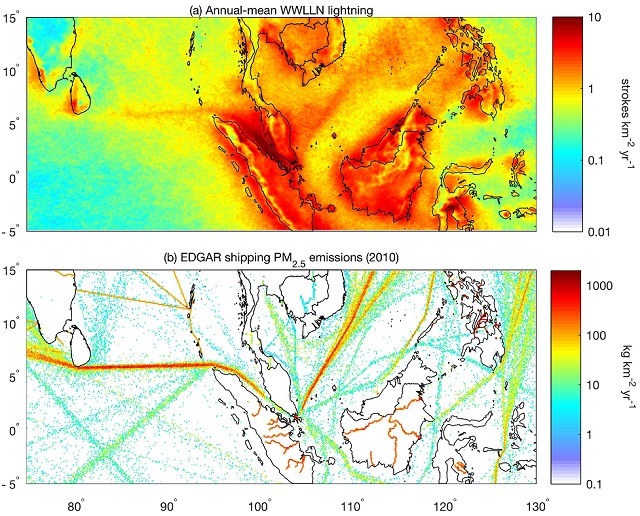 The top map shows annual average lightning density at a resolution of about 10 kilometers (6 miles), from 2005 to 2016. The bottom map shows aerosol emissions from ships crossing routes in the Indian Ocean and South China sea from 2010.Thornton et al/Geophysical Research Letters/AGU