Container operations at the port of Shanghai are on the rebound. While many districts in the city of nearly 25 million people continue to have reduced restrictions, Chinese officials are reporting that the port has nearly returned to productivity levels before the lockdowns that began at the end of March. The major shipping lines are similarly reporting levels of progress expecting that further restrictions will be relaxed by the end of the current month.

Chinese officials on Thursday highlighted that throughput at Shanghai has rebounded they said to 95 percent of normal and the level of activity before the lockdowns. This compares with April when they reported volumes were down to around 100,000 TEU dally which was a decrease by at least 35 percent from normal capacity. Many private estimates put the figure lower at close to 50 percent of normal capacity.

They are now also reporting that trucking volumes have rebounded to approximately 90 percent of capacity. However, many of the firms operating in the port continue to report a lack of trucking capacity. The health restrictions requiring truckers to have negative test results and limiting their entry into the port area if they have been in infected zones however remain in place.

China’s Ministry of Transport reports that main arteries have been reopened and in the next phase of the restoration they will be seeking to enhance movement. They are looking to further improve logistics as they move to further reduce restrictions on the city next week. 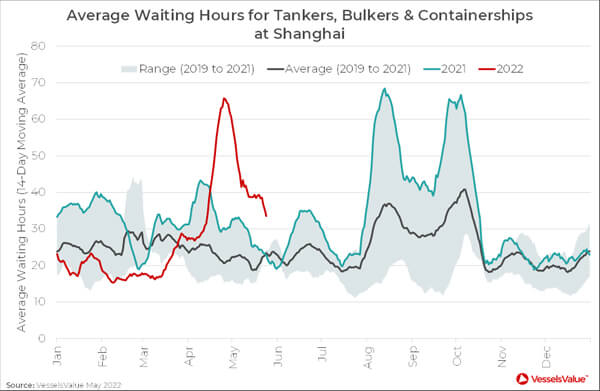 VesselsValue conducted an analysis of the congestion levels at Shanghai, reporting “Congestion at the port of Shanghai remains high for the time of year but is steadily normalizing as the city’s Covid wave subsides.” According to their analysis, overall wait times for vessels are down by approximately half from late April when the number of COVID cases peaked in the city. While wait times are still 10 hours above year-ago levels, they have come down from a peak of 66 hours in late April to a current 34 hours. The wait remains at the high end of the three-year range, but the downward trend is illustrated in the data.

As the world’s largest container port, Shanghai’s shutdowns are expected to have a continuing impact on the global supply chains. Drewry released estimates recently saying that it believed as many as 260,000 TEUs had not shipped during the nearly nine week shutdown. With many factories closed during that period Chinese goods were not being manufactured, but it is unclear if they can recoup any of the lost production or if those volumes were simply lost during the shutdown.

The lost throughput is showing up around the globe with many people fearing there could be a new surge in shipments and backlogs as the goods begin to flow again. Currently, the Marine Exchange of Southern California, as an example, is reporting that just 25 containerships were in the queue for the ports of Los Angeles and Long Beach as of May 27. While it is difficult to quantify how much of the decline is from the lockdowns in Shanghai, the current level ties the record low for the prot complex. The twin ports are down to a quarter of the backlog they were experiencing at the beginning of 2022. Containership arrivals for the San Pedro complex are back to levels seen in 2018 and 2019.