Secondhand Containership Market Heats up in 2021 Driven by Demand

Skyrocketing container shipping freight rates and the prospects for sustained demand are driving the container shipping segment to new heights. Yet while much of the attention has been focused on the record new orders and the efforts to expand the long-term capacity, the charter and secondhand markets are also being driven to new heights, according to a new analysis by industry trade group BIMCO. In the hottest segments of the market, prices for second had ships have increased fourfold in the past year.

“Carriers’ options for getting hold of extra tonnage in the short-term to meet current demand is limited to the charter and secondhand market,” says Peter Sand, BIMCO’s Chief Shipping Analyst. “The former is getting progressively more expensive and harder to come by as available tonnage is quickly snapped up, leaving the option of buying existing tonnage. Currently, both options come at a premium.”

The costs paid by shippers have skyrocketed, but so too has the demand for tonnage to cater to the high demand. As a result, charterers are paying record amounts for ships. Equally though the opportunity to add owned capacity into a well-earning market, has also caused the sale and purchase activity for containerships to double in 2021, according to BIMCO.

During the first half of 2021, a total of 277 container ships have changed hands, representing a 103.7 percent increase from 136 ships bought and sold in the same period of 2020 according to data from VesselsValue. The jump testifies to a red-hot container market that has fueled demand for tonnage, not only in the charter market but also for secondhand ships. 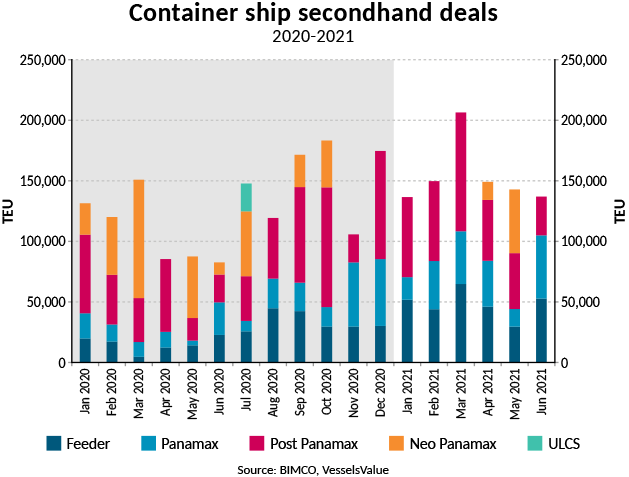 BIMCO’s analysis shows that a total of 922,203 TEU found new owners, with an average ship size of 3,403 TEU. The average size of ships being traded, however, has fallen compared with last year, while the number of deals has more than doubled. Capacity has only increased by 40 percent.

“From the seller’s perspective, the current prices offer a great incentive to sell, highlighting the role of asset play in some shipowners’ models, as profits on ships being sold these days can potentially cover the losses made by the ship over its lifetime,” says Sand.

The most dramatic price increase is coming for the smaller ships. Reported prices in June 2021 were up more than four times that paid in June 2020 for vessels in the feeder category, with a capacity between 100 and 2,999 TEU. VesselsValue reports the average paid in June 2021 was $17.6 million versus an average of $4 million in June 2020.

With the delivery of the new constructions still years away, the high demand for capacity and tonnage is driving the red-hot secondhand market with BIMCO’s analysis showing the prices will continue to be drive by the demand.