New Estimate Made of MH370 Location

Australia's research agency CSIRO is examining new evidence into the fate of Flight MH370 which it believes points to the location of the missing aircraft.

Flight MH370 disappeared on March 8, 2014 with 227 passengers and 12 crew on board. Oceanographic research has continued since the underwater search was suspended in January this year.

High-resolution images from an Airbus Pleiades 1A satellite showing “probably man-made” objects similar to debris items since found were taken on March 23, 2014, a little more than two weeks after the passenger airline went missing in the Indian Ocean.

Geoscience Australia completed a new analysis earlier this year, and the location of the objects in the images at the time of the crash was estimated by CSIRO using drift analysis.

Geoscience Australia concluded that the images captured by the Airbus Pleiades 1A satellite showed 12 objects that were probably man-made and 28 that were possibly man-made. A CSIRO report released last month says the dimensions of these objects are comparable with some of the debris items that have washed up on African beaches. The objects were located not far from the location identified by CSIRO oceanographic analysis in earlier reports as the likely crash site.

The new CSIRO report makes the point that this latest investigation required a very detailed knowledge of the surface currents “out in the middle of the ocean where almost no in-situ observations have ever been made.” The advantage for oceanographers this time was that drift modeling only had to be applied to a two-week window – a much shorter interval than the many months relating to all the other evidence. This allowed for much greater precision.

The oceanographic work by CSIRO has progressively incorporated new evidence as it has become available. In December 2016, based on debris found on Reunion and along the African coast, Griffin and his team estimated the crash site to be between 36 degrees and 32.5 degrees South latitude. Testing of a real Boeing 777 flaperon in water earlier this year confirmed with increased confidence the recommended search area. 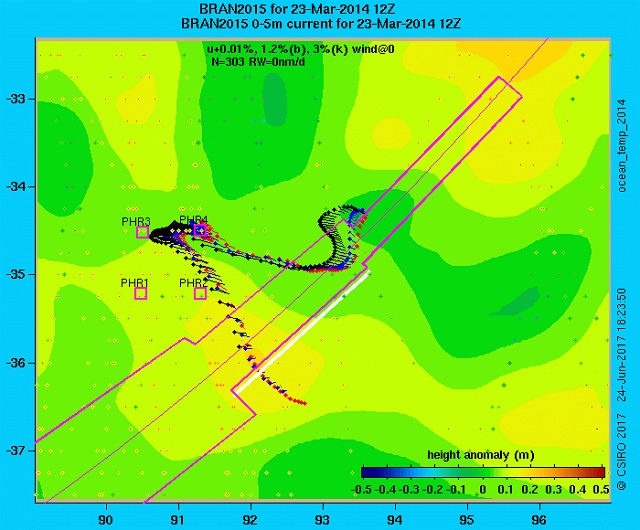 CSIRO’s drift model used in the latest report. The magenta outline delineates the area on the sea floor that has been searched by sonar. The white line denotes a number of potential impact sites. The model shows where debris from impact along that line of potential locations would be on March 23, when the image was taken by satellite. Some of the dots are within or close to image ‘PHR4’ – the image which revealed the most ‘probably man-made’ objects.