Sailboat to Collect and Process Ocean Plastics Gets Design Approval

An NGO dedicated to fighting for pollution-free oceans has won design approval for its unique concept vessel to clean up the oceans. The SeaCleaners hopes to launch its sailboat, the Manta, at the end of 2025 as part of its mission of raising awareness and promoting prevention, while also sharing scientific knowledge, and developing innovative solutions for waste collection and repurposing.

The NGO’s integrated engineering design office, Manta Innovation, has been working with naval architects Ship-ST and LMG Marin to develop the unique design for their vessel. In addition, Bureau Veritas recently reviewed the overall structure, stability, and security plans of the Manta, based on risk mitigation around new technologies and requirements. Bureau Veritas awarded Approval in Principle (AiP) to the Manta.

More than 45,000 hours of study and development have gone into developing the concept for the unique vessel over the past four years. The NGO reports that more than 60 engineers, technicians, and researchers, along with five research laboratories and 20 companies have contributed to the development of the design concept. 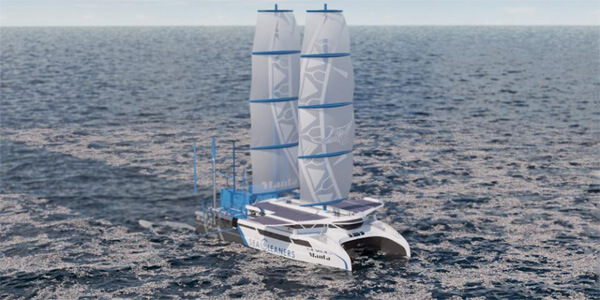 The Manta will be a 183-foot-long sailboat with a beam of 85 feet and masts rising 200 feet. The vessel, according to The SeaCleaners, will be the first concentrated ecology and technology factory ship capable of collecting and processing floating ocean waste before it gets fragmented, starts to drift, and penetrates the marine ecosystem. They plan to equip the vessel with an onboard factory including a waste-to-energy conversion unit.

“Marine plastic pollution is a global ecological disaster which requires urgent action now both on land and at sea. We are grateful that the Manta was awarded the AiP from Bureau Veritas Marine & Offshore. This represents a major milestone for us and shows the solidity of our approach to tackle plastic pollution,” said Yvan Bourgnon, President & Founder, of The SeaCleaners.

Supporting the mission of collecting and processing the plastics from the water, they plan for the Manta to serve as a state-of-the-art scientific laboratory for the observation, analysis, and understanding of ocean plastic pollution and as an educational platform open to the public. The plan also calls for the Manta to be powered by a combination of renewable energy technologies to minimize its carbon footprint and achieve 50 to 75 percent energy autonomy.

In the next development phase of the Manta, The SeaCleaners plan to launch the call for tenders to shipyards. Planning to set sail in just over three years, the Manta would be deployed in areas of high marine litter concentration along the coastal waters of the most affected countries and near the estuaries of major rivers collecting and repurposing floating plastic waste.