A new deepwater port is planned for Arkhangelsk in the north of European Russia.

The new deepwater hub will be suitable for year-round handling of large capacity vessels and will be situated 55 kilometers (34 miles) north from Arkhangelsk near Mudyug Island, in the northern part of the Sukhoye Morje Bay (Dvina Gulf in the White Sea).

Arkhangelsk is an oldest commercial sea port in Russia and the western terminus of the Northern Sea Route. It currently features a multifunctional commercial harbor for transshipment of general cargo, including pulp, cardboard, metals, sawn timber, containers, heavy equipment and bulk cargo.

It is also a principal base for oil and gas developments on the Arctic shelf including those in the Barents and the Kara Seas. Shipbuilding and repair are also important, and the port is the base for a fishing fleet. The region is also Russia’s main satellite launching area. 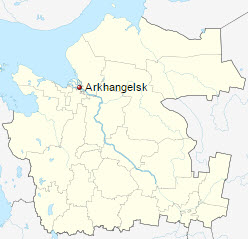 Throughput at the expanded port is anticipated to be capable of berthing vessels up to 100,000 dwt and of handling around 30 million tons of cargo by 2030.

The port is part of Russia’s Transport Strategy for the period to 2030. It is anticipated to offer an alternative and more attractive route for cargo flows to and from Europe, North America and China.

Arctic Transport and Industry Hub “Arkhangelsk” JSC was established in May 2016 to manage the project, and a development agreement was signed with Poly International Holding in China last week.

The project is linked to the construction of a new railway link to Arkhangelsk which will allow for logistics optimization of cargoes delivered from the Urals and Siberia.