On June 26, the UK Royal Navy and three merchant vessels rescued 13 sailors from the waters of the Arabian Sea, about 120 nm northeast of Socotra Island.

At 0230 that morning, the tanker Rama 2 put out a distress call, which was picked up and forwarded to the UK Maritime Trade Operations (UKMTO) office in Dubai. The Rama reported a heavy list to starboard, and weather conditions were very rough in the area, with waves over 25 feet.

UK naval commanders and the Combined Maritime Force (CMF) in Bahrain assessed their options to assist the rescue. HMS Monmouth’s Wildcat helicopter, known as "Black Jack," launched to meet up with the landing dock ship RFA Cardigan Bay, which was closer to the scene. At about about this time, SAR forces learned that the Rama 2 had sunk.

While Cardigan Bay and Black Jack steamed towards the site of the sinking, the merchant vessels Tortola, Soyo and Sea Power were able to locate and save the majority of the crewmembers. Of the 14 men in the water, Tortola was able to rescue ten and Sea Power rescued two more, leaving only two crewmembers missing. None of the men were in life rafts – the severe weather had prevented them from boarding. 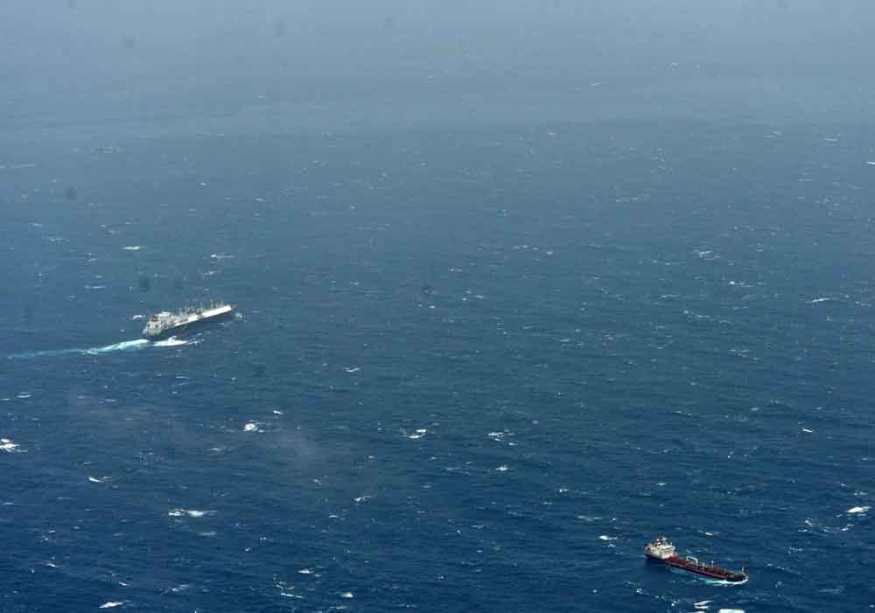 RFA Cardigan Bay made her best speed towards the scene, and as soon as she was within helicopter range, Black Jack launched to conduct a search. A Japanese maritime patrol aircraft with Combined Maritime Forces Bahrain relayed likely positions. Just towards the end of the flight time, a crewmember was spotted in the water, but he was not showing signs of life. Due to critically low fuel, Black Jack marked his location and returned to Cardigan Bay.

Meanwhile, the Soyo found and marked the location of the remaining survivor. With darkness approaching, Black Jack returned from the Cardigan Bay. Conditions were foul and the helicopter's fuel ran low again. The aircrew lowered the winchman, and at times both he and the survivor were engulfed in the waves. It took over half an hour to get the crewmember connected to the wire for a last-minute lift.

Back on the Cardigan Bay, the survivor was immediately checked by the medical officer, who found him to be fit, if somewhat battered. He was reunited with his crewmates aboard the Tortola and taken to Salalah, Oman.

In spite of an extensive search, the last crew member could not be recovered. He was believed to have been in the water for over 12 hours and had been assessed as lifeless at last sighting.