New research was released looking at the effectiveness of one of the key design elements, the EEXI timed to the opening of the pivotal MEPC 77 meeting at the IMO designed to shape future environmental policies. The findings show that the recently adopted MARPOL initiative will have a positive effect in some situations but also shows the critical importance of focusing on efficiency for existing vessels at the current meetings.

Technology company NAPA, headquartered in Helsinki, Finland performed the analysis looking at the potential effect of the Energy Efficiency Index for Existing Ships (EEXI). They used real voyage data from 1,500 bulkers over 12 months in 2019 factoring in weather, routes, speed profiles, and other factors to determine the impact on total emissions, carbon intensity, and the effects on transportation capacity for the global bulker fleet.

The study finds that the implementation of EEXI would reduce CO2 emissions by an estimated 6.6 percent and carbon intensity by 4.6 percent on bulk carriers. However, it also demonstrates that de-rating engines would only impact speed in limited circumstances. The data shows that the engine power limitations required by vessels to comply with EEXI would only have come into effect at high-speed peaks. The analysis concludes, for most of the year, if EEXI had been in effect, vessel operations would have remained largely similar. 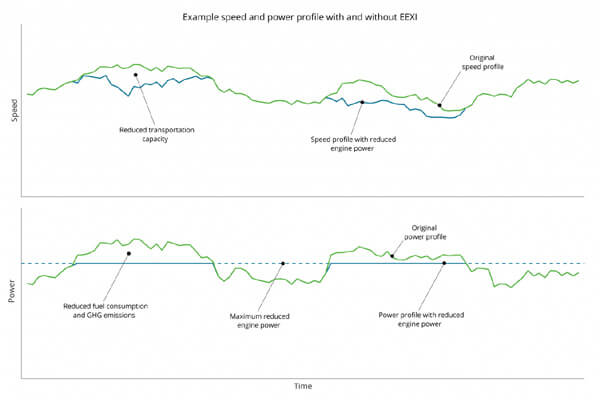 Example speed and power profile with and without EEXI shows that when EEXI is enforced, limiting engine power will cut ship speeds where the green line is above the blue line (Source NAPA)

“While this is a good start, it shows the gap between what EEXI can achieve and how much more ground there is to make up,” says Teemu Manderbacka, Lead R&D Engineer at NAPA.  “It shows why, at MEPC 77, to truly match the level of ambition that has come out of COP26, the IMO member states will need to prioritize efficiency.”

Adopted by MARPOL in June 2021, EEXI considers the ship’s design parameters to measure and restrict CO2 emissions per transport work.  Most experts suggest that one of the most common means of complying with EEXI is likely to be through limiting engine power.

“It demonstrates that EEXI can reduce carbon intensity and that the carbon savings outweigh the reductions in lost transport capacity,” said Manderbacka. ”We wanted to analyze the effect of EEXI on real-life operations, so we tried to answer the question, ‘what would have happened if EEXI was implemented in 2019?’ We discovered that it would be similar to limiting the top speeds of cars in Europe from 160kph to 130kph. For most users on most roads, it doesn’t really change anything; the only people it affects are those on the autobahn in Germany.”

NAPA believes that the data presented in its preliminary research illustrates that the industry is that the beginning of a much longer journey to decarbonization. They are calling on the delegates at MEPC 77 to recognize the urgency and take steps to move the shipping closer to its targets for reducing global emissions.