Royal Caribbean is estimated to have emitted four times more than the European car fleet.

In absolute terms, Spain, Italy and Greece, closely followed by France and Norway, are the European countries most exposed to SOx air pollution from cruise ships, says Transport & Environment. Barcelona, Palma de Mallorca and Venice are the most impacted European port cities, followed by Civitavecchia (Rome) and Southampton.

NOx emissions from cruise ships in Europe was comparable to 15 percent of the NOx emitted by Europe’s passenger car fleet in a year, the report finds. In Marseille, for example, 57 cruise ships emitted almost as much NOx as one-quarter of the city’s 340,000 passenger cars in 2017. Along the coasts of countries such as Norway, Denmark, Greece, Croatia and Malta, a handful of cruise ships are responsible for more NOx than the majority of the domestic car fleet.

Europe should implement a zero-emission port standard, says the report, which also recommends extending emission control areas, currently in place only in the North and Baltic Seas and English Channel, to the rest of the European seas. Furthermore, the report recommends regulating NOx emissions from existing ships, which are currently exempt from NOx standards applying in emission control areas. 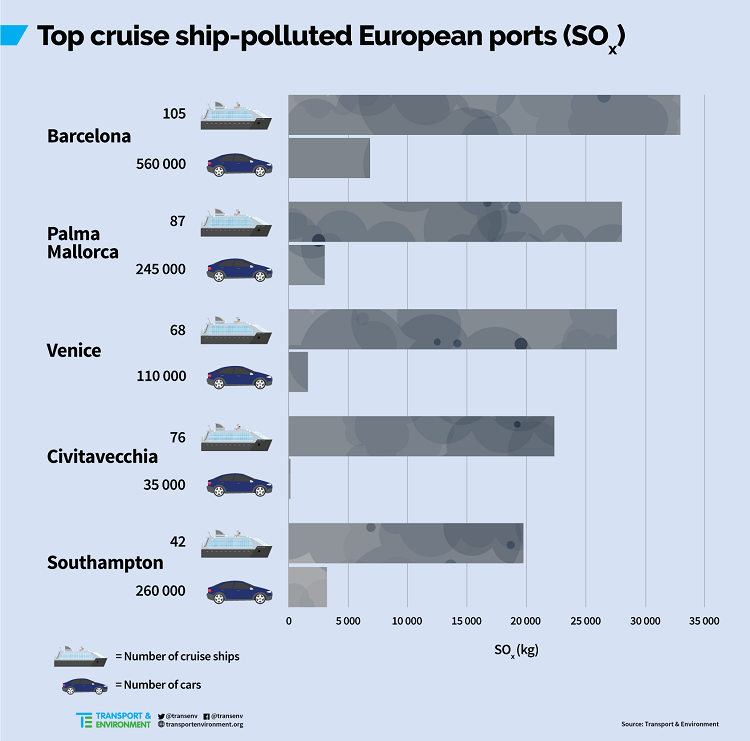 The study analyzed 203 cruise ships that sailed according to ship automated identification system (AIS) in the EEZ of European countries in 2017. Operational data (including ship coordinates and speed) was obtained from ExactEarth. The AIS data for the analyzed ships had a nominal 1-hour interval between each data point.

The authors first allocated each data point to the EEZ and port cities and then used the methodology
followed by the IMO's third GHG Study, previous T&E reports and the ICCT GHG inventory to estimate the fuel consumption of each ship and associated emissions of air pollutants for each data point and summed them for respective country EEZs and ports. In estimating emissions, the authors assumed that all the ships analyzed complied with the relevant fuel sulfur standards in place in each geographical area.

Carnival has issued the following statement:

Carnival Corporation strongly refutes the conclusions from the Transportation & Environment (T&E) report as being inaccurate, misleading and irrelevant. The report is based on an in-house analysis applying highly questionable methodology with so-called “best guess” estimated data on cruise ship emissions. In fact, the figures arrived at in the report do not reconcile with calculations using actual fuel data and emissions from cruise ships, as well as data independently collected and verified by the ports themselves. It also does not take into account that it is well-accepted among regulatory groups such as the International Maritime Organization and the U.S. Environmental Protection Agency that we have implemented several advanced technologies that remove the vast majority and sometimes all of the sulfur from exhaust, resulting in extremely clean air emissions.

The very premise of the report is misleading. It compares the environmental impact of sulfur in automotive diesel fuel to the fuel used to power cruise ships (and, by extension, commercial shipping vessels.) In fact, road diesel does not meet the regulatory, technical and safety requirements for use onboard ships -- making the study a completely inaccurate and irrelevant apples vs. oranges comparison between automobiles and ships.

It is clear this study lacks the rigor required by scientifically valid research. It is unfortunate to see such irresponsibility from an organization, which clearly has an agenda to create “noise” without legitimate and transparent science to support its claims.

Carnival Corporation and its nine global cruise line brands are committed to achieving and sustaining environmental excellence. With that in mind, below are a few examples of our ongoing sustainability initiatives.

We have invested over $100 million to equip 43 existing ships and 20 newbuilds under construction with shorepower (SSE) capability. We use this innovative offering whenever possible. It is worth noting that adequate shorepower today exists at only two ports in Europe, which is why we advocate throughout the continent and around the world to develop the availability, reliability and effectiveness of this clean source of power generation.

New approaches such as AAQS and LNG are the effective, efficient ways to dramatically reduce SOx and other contaminants. Extensive independent testing supports this innovative approach.

T&E’s statement included an array of opinions on mandates regarding cruise industry standards, based partially on automotive measurements.

The group’s advocacy for road diesel as an alternative is flawed for several reasons, including the fact that road diesel does not reduce PM or NOx, and carries an additional energy/carbon dioxide (CO2) penalty in the refining process. Road diesel also fails to meet the strict safety standards for ships, which operate at a higher minimum flash point than a standard automobile.

The organization also recommended alternatives such as batteries or hydrogen power as alternatives. This technology is not currently applicable at the size and scale at which a modern cruise ship operates. As with many other technologies, Carnival Corporation is among the leaders in investing in and researching the development of these options, but the idea of mandating a shift to battery power today is simply not a scientifically sound position.