Remembering the Herald of Free Enterprise

The ro-ro Herald of Free Enterprise capsized in just 90 seconds on March 6, 1987. She was sailing out of Zeebrugge at the time, headed for Dover, and 150 passengers and 38 members of the crew lost their lives.

The eight-deck ro-ro had been designed for rapid loading and unloading on the competitive cross-channel route, and there were no watertight compartments. When the ship left harbor with her inner and outer bow doors open, the sea immediately flooded the decks, and within minutes she had capsized and was lying on its side in shallow water.

The Herald of Free Enterprise was manned by a crew of 80 and was carrying 459 passengers at the time along with 81 cars, 47 freight vehicles and three other vehicles.

Although the immediate cause of the sinking was found to be negligence by the assistant boatswain, asleep in his cabin when he should have been closing the doors, the official inquiry placed more blame on his supervisors and a general culture of sloppiness in the shipowning company.

The U.K. Marine Accident Investigation Branch (MAIB) report records that the investigation determined that the capsizing was partly contributed to by serious negligence in the discharge of their duties by Captain David Lewry (master), Leslie Sabel (chief officer) and Mark Victor Stanley (assistant bosun), and partly contributed to by the fault of Townsend Car Ferries Limited (the owners). 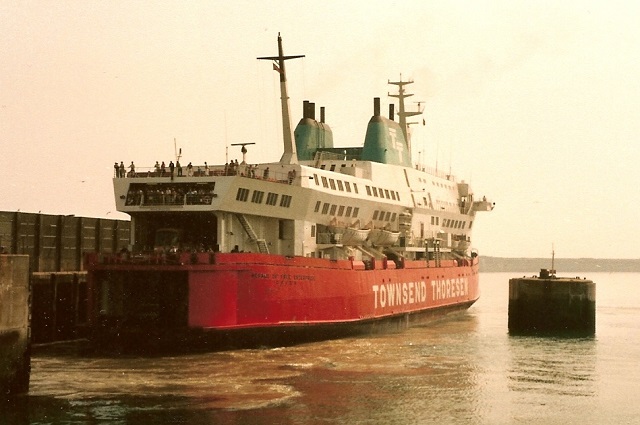 Stanley had opened the bow doors on arrival in Zeebrugge. He was engaged in supervising members of the crew in maintenance and cleaning the ship until he was released from work by the bosun. He then went to his cabin, where he fell asleep and was not awakened by the call “Harbour Stations,” which was given over the Tannoy address system. He remained asleep on his bunk until he was thrown out of it when the Herald of Free Enterprise began to capsize.

Stanley found his way out of the ship and on to her hull where he set about rescuing passengers trapped inside. He broke a window for access and, when he was scooping the glass away his right forearm was deeply cut. Nevertheless, he re-entered the hull and went into the water to assist passengers. He continued until he was overcome by cold and bleed loss.

“Stanley has frankly recognized his failure to turn up for duty and he will, no doubt, suffer remorse for a long time to come,” states the report.

The bosun, Terence Ayling, told the investigation that he thought he was the last man to leave G deck, where he had been working in the vicinity of the bow doors and that, so far as he knew, there was no one there to close the doors. He had put the chain across after the last car was loaded. There was no reason why the bow doors should not have been closed as soon as the chain was in position.

Ayling was asked whether there was any reason why he should not have shut the doors. He replied “It has never been part of my duties to close the doors or make sure anybody is there to close the doors.” He also said “At that stage it was “Harbor Stations” so everybody was going to their stations.”

The investigators believed that he unfortunately took a narrow view of his duties. However, his behavior after the capsize was exemplary. In the absence of any deck officer, he took the responsibility for organizing the rescue efforts, first from the bridge and later in the passenger spaces.

This was not the first occasion the doors had not been shut. In October 1983, the assistant bosun of the Pride of Free Enterprise had fallen asleep and had not heard “Harbour Stations” being called, with the result that he neglected to close both the bow and stern doors.

A general instruction issued in July 1984 prescribed that it was the duty of the officer loading the main vehicle deck to ensure that the bow doors were secure when leaving port. That instruction had been regularly flouted, stated the investigators. It was interpreted as meaning that it was the duty of the loading officer merely to see that someone was at the controls and ready to close the doors. “That is not the meaning of the instruction. The instruction is not clearly worded, but, whatever its precise meaning, it was not enforced. If it had been enforced this disaster would not have occurred.”

Frequently the order “Harbour Stations” was given before loading was complete. The order was given as soon as the loading officer decided that by the time the crew arrived at their stations everything would be ready for the ship to proceed to sea.

At first sight the faults which led to this disaster were the omissions on the part of the crew. However, states the investigation report, a full investigation into the circumstances of the disaster leads inexorably to the conclusion that the underlying or cardinal faults lay higher up in the company.

The report goes on to say: “All concerned in management, from the members of the Board of Directors down to the junior superintendents, were guilty of fault in that all must be regarded as sharing responsibility for the failure of management. From top to bottom the body corporate was infected with the disease of sloppiness.”

The MAIB report is available here.