The International Maritime Organization convened its Maritime Environment Protection Committee (MEPC77) which is seen by many as a pivotal event following the global climate conference in Scotland just weeks ago. Adding to the fractious environment in the meeting hall and with many delegates online, protesters in front of the IMO headquarters highlighted the belief that the time has come for action.

Nearly halfway through the allotted time for the meeting, the only thing the delegates seem to agree on is that the shipping industry is drawing increasing world attention. IMO Secretary-General Kitack Lim opened the sessions saying that global attention is focused on this meeting and its outcome. He highlighted the efforts agreed to at COP26 saying that the IMO also needed to show progress leading the shipping industry to zero-carbon alternatives. Delegates are also expressing their concern that the meeting will conclude with the image that the IMO continues to be indecisive and dragging its feet in taking critical actions.

Led primarily by island nations saying their very future is threatened by the rising oceans, the push for a concrete resolution from MEPC committing to zero carbon emissions by 2050 failed to gain broad support. Members such as the United States spoke of the clear scientific evidence of climate change and the need to move quickly if shipping is to play its part in meeting the goals of the Paris Agreement. Nations such as China and Russia spoke against a resolution establishing zero emissions by 2050 and in the end, the EU joined by Norway, South Korea, and others, ensured that there would not be a resolution doubling the IMO’s target by 2050. The EU later said that the focus must be on specific actions, not broad resolutions. EU officials are considering their plan for an emissions trading scheme as part of its “Fit for 55” proposal.

Outside, the protesters from the environmental group Ocean Rebellion brought in their “dirty scrubbers,” to clean up the mess created by big oil and the IMO. Protesters “arrived to clean up the situation with mops and buckets of greenwash,” said Ocean Rebellion describing its demonstration. “Fossil fool oil heads,” which the group said represented industrial lobbying of the IMO, spilled oil and money on the pavement in front of the IMO offices. 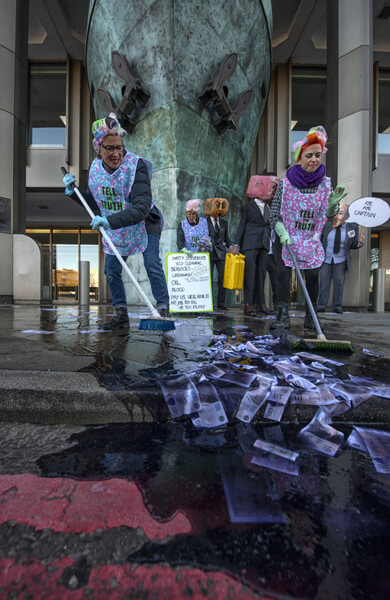 “Our demand is simple, Get Ships Off Fossil Fuels, to stop climate breakdown,” said Sophie Miller, a spokesperson for the group. “The IMO has a chance to turn things around.” The group said it was returning to protest at the IMO calling for it to “do the right thing and agree on a pathway for mandatory carbon reductions by 2030.” Last year, Ocean Rebellion set fire to a boat outside the IMO saying it symbolized the disregard for the Paris Agreement.

Despite the pressure on MEPC and the IMO many of the same issues continue to emerge in the debates. Concerns about the cost of developing and converting to emerging alternatives to carbon-based energy and the inequities between large and developing nations.

With the efforts to have a formal resolution accelerating the IMO’s zero-carbon targets stopped, some talk emerged of a statement or other efforts while the session began to also focus on the specific proposals. Among the issues before MEPC are the calls for a carbon tax or cap-and-trade schemes for carbon.  The shipping industry represented by major trade groups continues to advocate for its proposed R&D fund supported by a fee on fuel to support the development of the technologies and infrastructure to support the adoption of alternative energy sources.

The current MEPC session is scheduled to conclude on Friday, November 26, with everyone from the shipping industry to the protesters waiting to see if any definitive actions will emerge from the IMO.