As the prospect of increasing volume from the New Panama Canal approaches, the Port of Tampa Bay is upgrading its container facilities to join the increasing number of U.S. East Coast ports capable of handling larger vessels.

Today it took delivery of two modern gantry cranes in anticiation of the new, larger ships that will begin passing through the expanded Canal later this year. The cranes, purchased for $24 million from Chinese firm ZPMC, can accommodate stack heights to 130 feet and can reach out to 174 feet, enough to handle 9,000 TEU container ships - almost twice the size of the current maximum capacity at the port.

“The arrival of these new container cranes marks an important milestone for Port Tampa Bay, enhancing our ability to better serve our large and growing market,”said  Paul Anderson, port president and CEO. 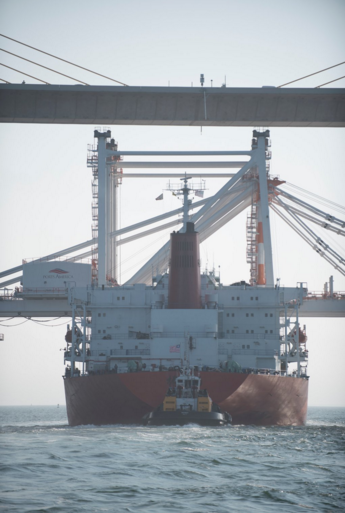 The port says that its regional market, the Tampa Bay-Orlando corridor, is Florida's fastest growing region and is home to the state's largest concentration of distribution centers.

However, it may have to overcome obstacles above and below the water to gain the business of the largest vessels transiting the new canal. Port Tampa Bay's container terminal has a draft restriction of 43 feet, according to the port's information sheet, and the Sunshine Skyway Bridge restricts visiting vessels to those with an air draft of under 180 feet. The largest of the New Panamax ships are designed to dimensions of up to 1,200 feet long and 161 feet wide, with a draft of 50 feet and an air draft of 190 feet; they can carry up to 13,000 TEU.

Competitor PortMiami claims that it is the only "major logistics hub" south of Virginia capable of handing the largest fully laden New Panamax vessels, having recently completed a $1 billion dredging project to increase its container terminals' maximum draft to 52 feet. The port's maximum air draft is 210 feet.

Just north of Miami, Port Canaveral is also investing in container capacity, with a dredging project to accommodate vessels to 40 feet of draft, and a new container terminal, its first, which began operation with two refurbished gantry cranes just last year.