USS Nevada was one of the U.S. Navy's longest-serving battleships, serving escort duty during World War I and appearing at three of the major battles of World War II. She was the only U.S. battleship to get under way during the Pearl Harbor attack at the war's outset, and she supported the D-Day invasion and the Iwo Jima and Okinawa landings at the war's end.

On December 7, 1941, in the attack on Pearl Harbor, USS Nevada was the only battleship to get underway. She was targeted repeatedly by Japanese aircraft and struck by five bombs, forcing the crew to beach her in shallow water to prevent her from sinking. During this action 60 of her crew were killed and 109 wounded. 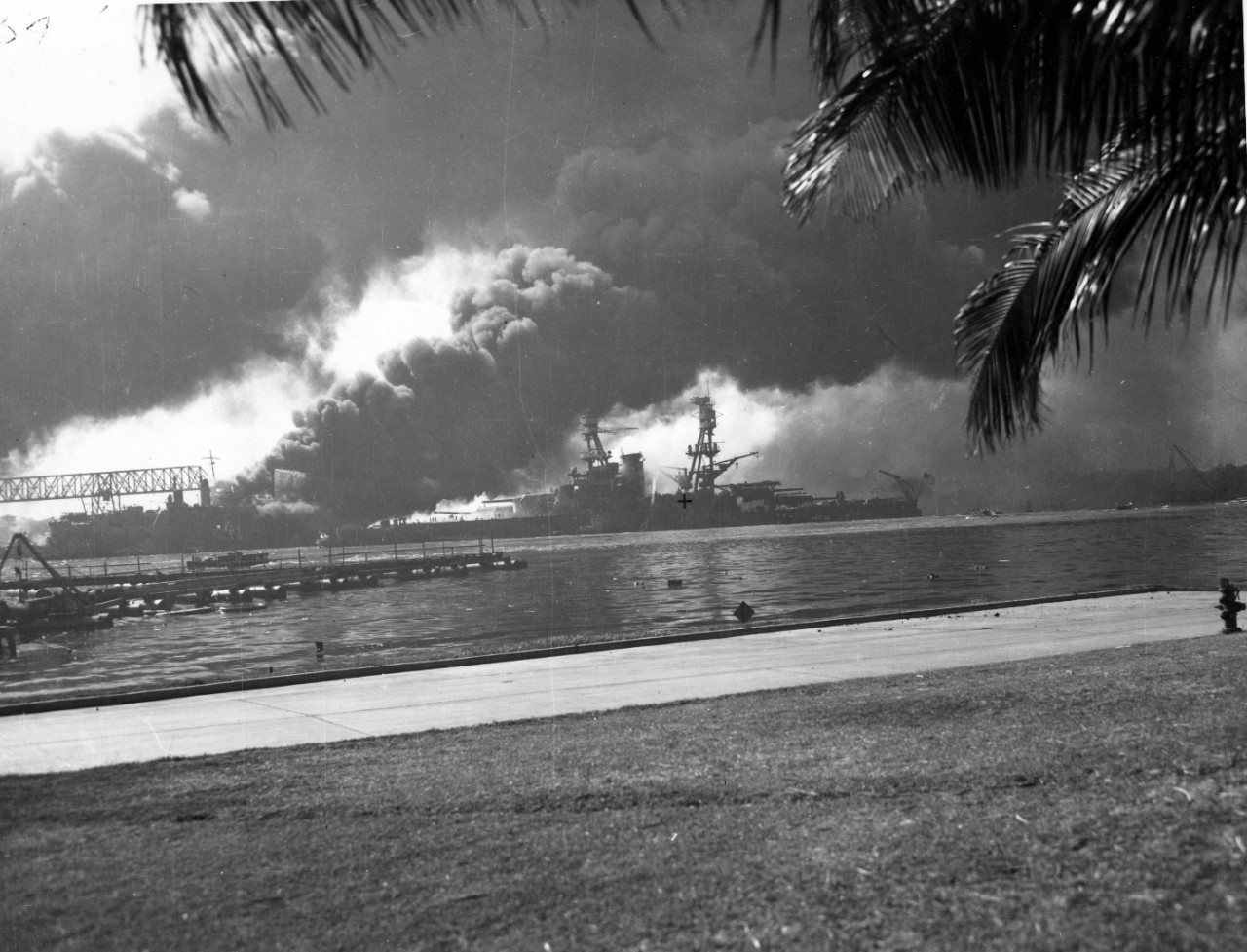 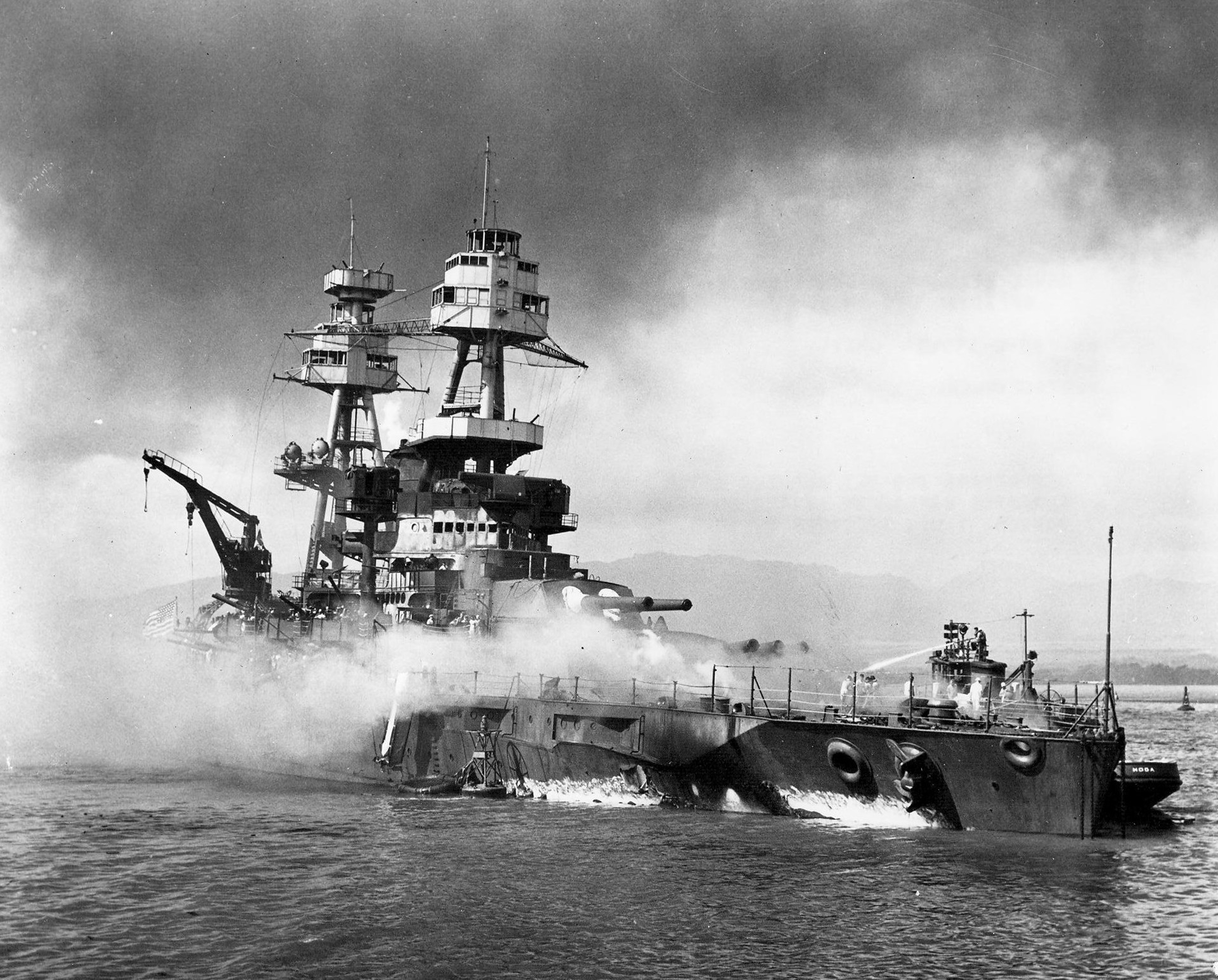 USS Nevada beached and burning after the Pearl Harbor attack. A channel marker buoy is visible at far right.(USN 80-G-19940

Following salvage operations, she was repaired and re-joined the war effort, sailing to the United Kingdom to take part in the D-Day landings, among other European operations. She then sailed to the Pacific, arriving off Iwo Jima in February 1945, and she played an important part in the invasion of Okinawa.

After the war, USS Nevada was deemed obsolete, and she was selected to serve as a test target at the Bikini Atoll nuclear testing site in 1946. She survived two atomic blasts, leaving her heavily contaminated with radiation. Nevada was towed back to Pearl Harbor and intentionally sunk in a gunnery exercise in 1948. Records suggest that an exceptionally large quantity of explosive ordnance was required to send her below. 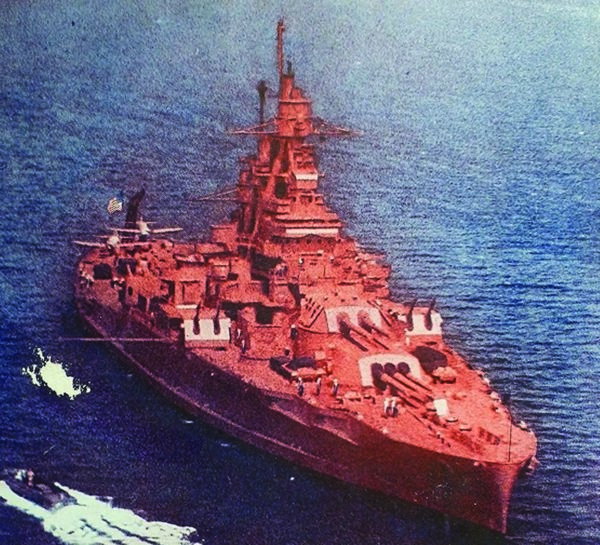 USS Nevada was repainted in orange to serve as an air-drop bomb target for the epicenter of the Able atomic bomb test, the first of two "shots" in Operation Crossroads. The bombardier missed, and Nevada survived. (USN)

This year, an Ocean Infinity search team aboard the offshore vessel Pacific Constructor found USS Nevada at a position 65 nautical miles southwest of Pearl Harbor, resting at a depth of over 15,400 feet. The discovery was the result of a collaboration between underwater archaeology firm SEARCH and Ocean Infinity. It was enabled in part by good timing: Pacific Constructor set sail for a range of commercial tasks in the Pacific in early 2020, ahead of the COVID-19 pandemic. As a result of the global health crisis, the ship has remained at sea on a range of taskings, including the USS Nevada project.

“Nevada is an iconic ship that speaks to American resilience and stubbornness. Rising from its watery grave after being sunk at Pearl Harbor, [she] survived torpedoes, bombs, shells and two atomic blasts. The physical reality of the ship, resting in the darkness of the great museum of the sea, reminds us not only of past events, but of those who took up the challenge of defending the United States in two global wars. This is why we do ocean exploration to seek out these powerful connections to the past," said Dr. James Delgado, SEARCH SVP and lead maritime archaeologist on the mission.

"USS Nevada serves a reminder that our sailors have a long, terrific tradition; her fighting spirit proved the U.S. Navy remains tough in difficult times. When the circumstances appear to be at their worst, our Navy remains at their best," said Rear Adm. Samuel Cox (USN, ret'd), director of the Naval History and Heritage Command. "It is our hope that by sharing the USS Nevada’s story that it not only honors those who served in the Navy and fulfils an important educational role, but that in these challenging times it also serves as a symbol of perseverance and courage.” 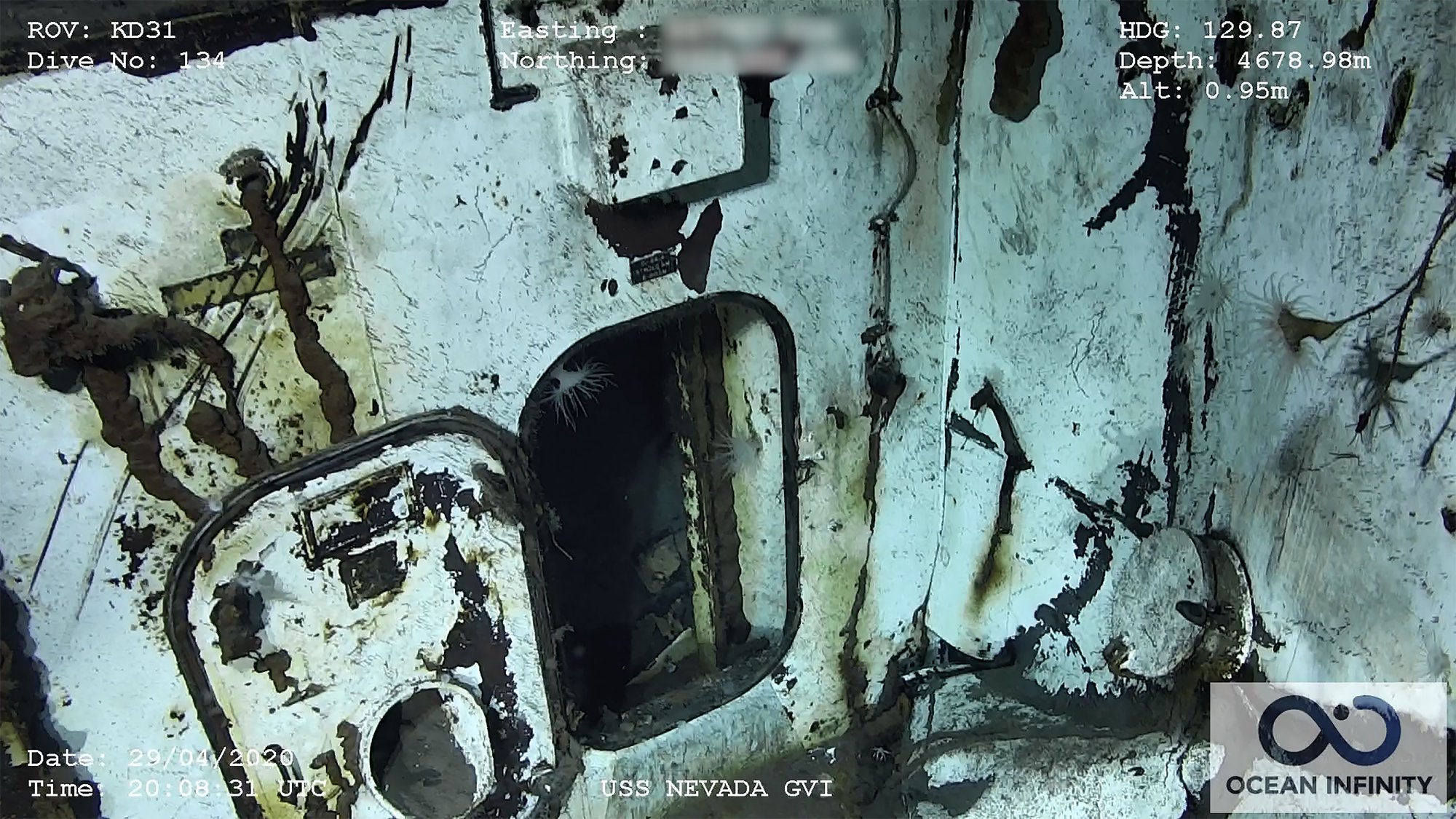 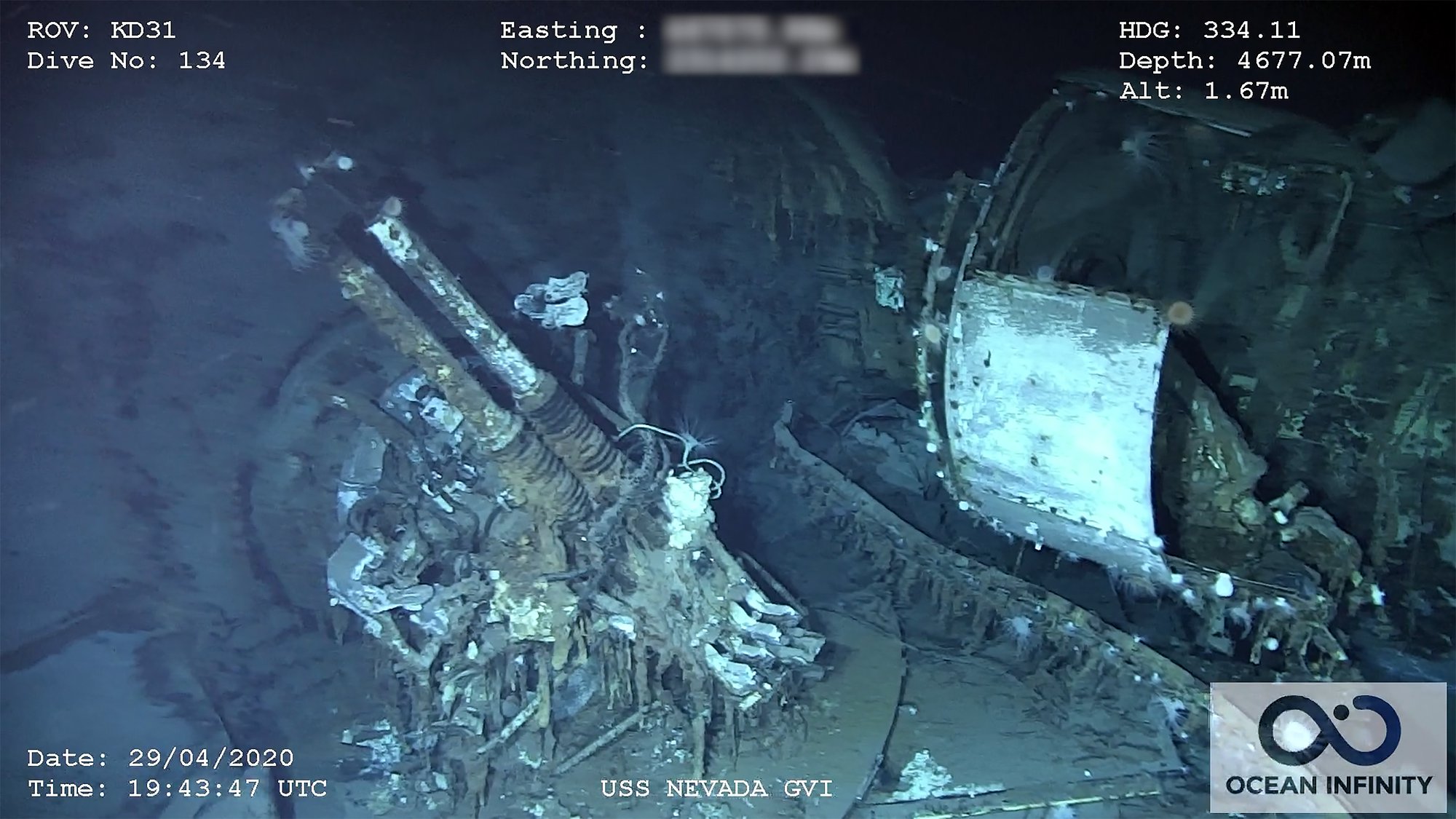 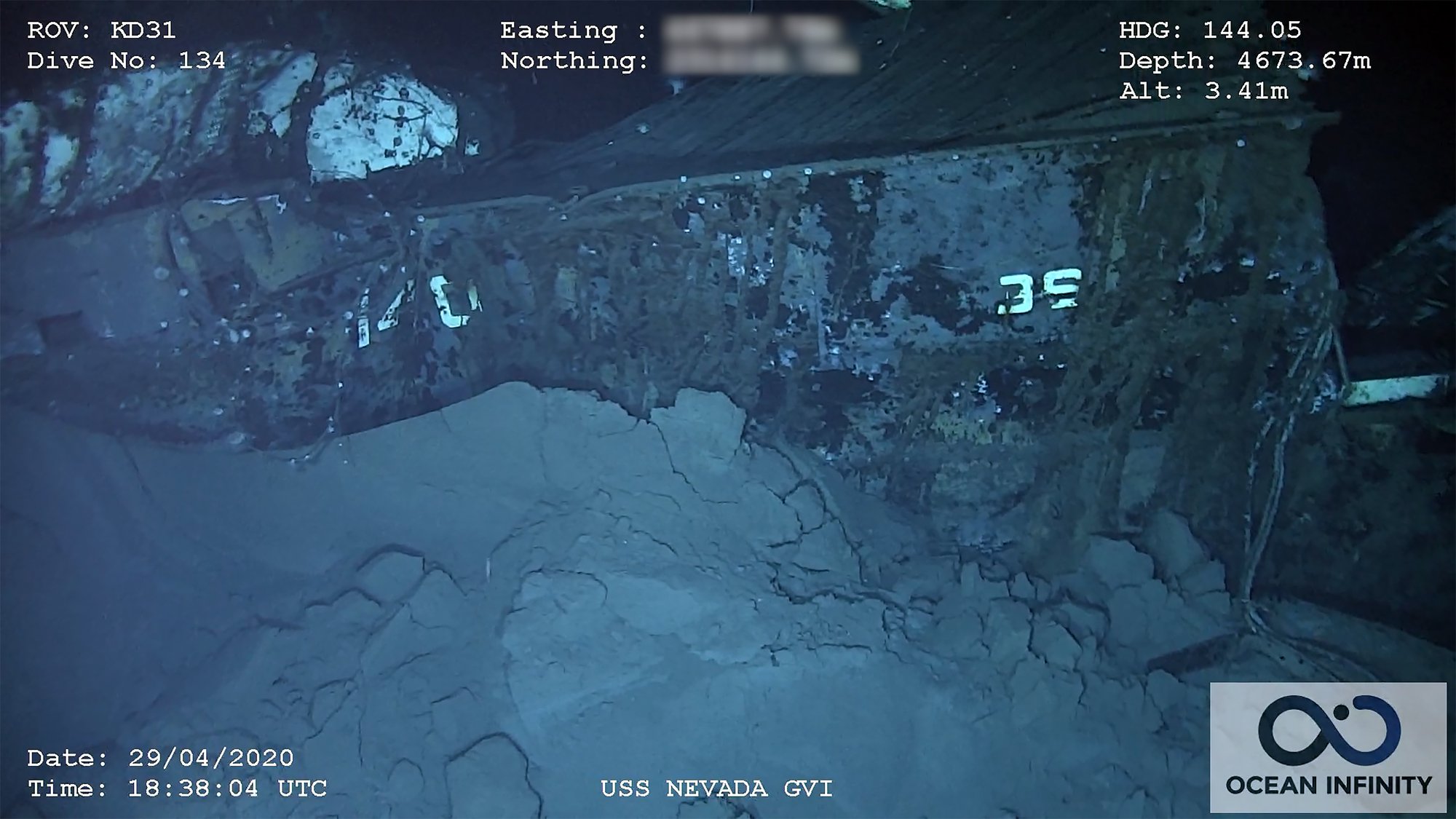