Imports of retail merchandise at the nation’s largest container ports are continuing to show double-digit growth over last year leading to the forecast that 2021 will be a record year, surpassing the strong results in 2020 and becoming the third consecutive year of growth in U.S. imports. According to the association of retailers, the National Retail Federation, strong consumer demand is driving the momentum and could drive imports past the 25 million TEU mark for the year.

“The year-over-year growth we saw this spring was off the charts because the comparisons were against a time when most stores were shut down due to the pandemic,” said NRF Vice President for Supply Chain and Customs Policy Jonathan Gold. “But we’re continuing to see strong growth even as we enter a point when stores had begun to reopen last year. That’s a sign of the tremendous demand from consumers. The challenge for retailers and supply chains is keeping shelves stocked as port congestion and other supply chain disruptions continue to impact the industry and the economy more broadly.”

The monthly Global Port Tracker report released by the National Retail Federation and Hackett Associates estimates retail imports at a total of 12.8 million TEU for the first half of 2021 at the 13 largest U.S. ports, which are tracked by the report. That equates to a 35.6 percent increase from the same period last year.

The Global Port Tracker will not release its forecast for December until next month, but retail imports measured in TEUs are on track to grow 16.7 percent in 2021 according to the NRF. That would exceed 2020’s full year total of 22 million TEU. Cargo imports during 2020 were up 1.9 percent over 2019 despite the pandemic. Based on the current pace and the NRF’s forecasts for the fall, imports should surpass the 22 million TEU mark by early November. 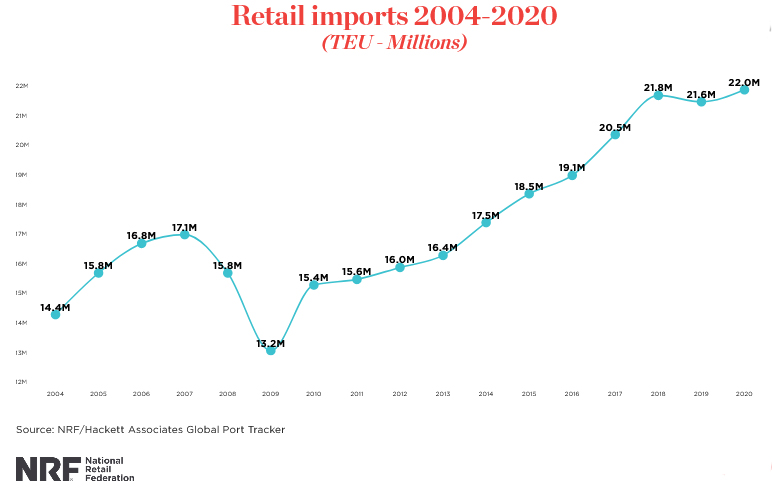 Imports during the spring and leading into the summer of 2021 were up by as much as 50 percent over last year’s numbers that were depressed by the pandemic and stay-at-home orders. U.S. ports covered by Global Port Tracker handled 2.33 million TEU in May, setting a new record for the most containers imported during a single month since NRF began tracking imports in 2002. The Global Port Tracker expected June to be at 2.15 million TEU when the ports release data later this month.

The NRF is reporting that it expects the rate of increase to stabilize as the year-over-year comparisons begin to reflect the surge in imports that began in the summer of 2021. They, however, project monthly levels above two million TEU and increases to continue through October. Currently, they are forecasts a two percent decline year-over-year for November but with 2.06 million TEU, the annual total will reach 23.66 million TEU according to the Global Port Tracker at the end of 11 months and before the year-end surge.

“The level of growth in the last year has put unprecedented pressure on importers, carriers, and domestic transportation providers alike,” notes Hackett Associates Founder Ben Hackett. Ports, however, are handling record numbers of containers and preparing for the expected growth in volumes later this year and over the longer term.