Next Generation Scrubber Barge Being Built to Service At-Berth Ships

In the response to the need for more shipping companies to address the in-port emissions of their vessels, California-based Clean Air Engineering – Maritime is expanding its fleet of innovative scrubber barges to service California ports. The company is building a new 85-foot-long self-propelled barge at the Greenbrier Companies shipyard in Portland, Oregon that will be operated to capture and treat stack exhaust of vessels in the ports of Long Beach and Los Angeles, California. The company also plans to produce more of these barges that can be operated in several other California seaports.

Clean Air Engineering Maritime has been providing services at the Port of Los Angeles since 2015 when it became the first company to receive the California Air Resources Board (CARB) approval for a barge-based marine exhaust treatment system. The company’s system, which is based on barges that are positioned alongside and attached to the funnel, is currently the only exhaust capture and treatment service in compliance with the CARB At-Beth Regulation. They have serviced over 400 vessels, focusing currently mostly on containerships.

“It is more important than ever to develop innovative technologies that help reduce emissions in ports to an absolute minimum,” said Nicholas Tonsich, President at Clean Air Engineering - Maritime. “Our latest METS-3 will succeed in doing exactly that as our new flagship project.”

The new METS-3 (Marine Exhaust Treatment System) was designed by Fassmer Technical Projects. Tim Klaybor, Managing Director at Fassmer USA noted that several factors had to be taken into account in the design of this next-generation CAE-M METS-3. 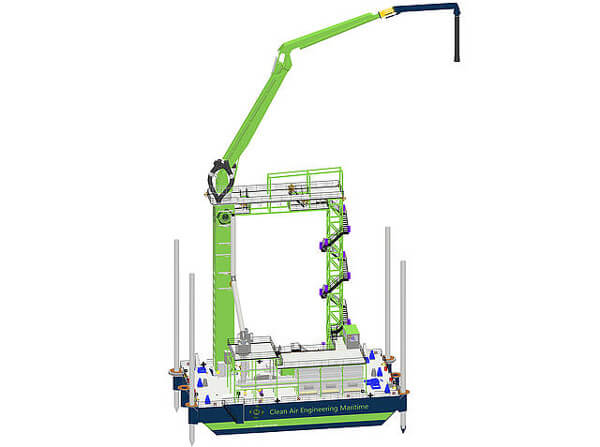 CAEM is building a next generation barge improving maneuverability (Schottel)

The propulsion system, including the complete electrical package, which comprises electric motors, frequency drives as well as a portable control station, will be provided by the German propulsion expert Schottel. The main propulsion system will consist of two electrically-driven Schottel RudderPropellers type SRP 150 (400 kW each) featuring propeller diameters of 1.2 meters. They will run on biodegradable oils.

To improve the maneuverability and operations of the barge, they will use the Schottel MasterStick, which is a joystick system that can control up to six propulsion units simultaneously. The thrust and the alignment of the propulsion units are controlled and distributed by software to ensure the optimal execution of all the translational and rotational movements required for maneuvering the barge. The operator will be able to control the ship's movement intuitively and comfortably in any desired directions of motion or in a combination of those.

Using proprietary technology, the company’s systems remove diesel emissions from the auxiliary engines and boilers of ocean-going vessels while at berth or anchor. The barge positions the scrubber alongside the vessel and it is attached directly to the funnel exhaust. The company markets it as an alternative to “plugging in” to shoreside power or when shore power is not possible for a vessel. The barge-mounted system they report captures and treats more than 90 percent of PM, NOx, SOx, and related diesel pollutants emitted.

Earlier in May, Japan’s Mitsui O.S.K. Lines announced that it was partnering with Clean Air Engineering – Maritime to develop new applications of the technology. They are seeking a solution for the company’s car carriers to meet the pending extension of California’s strict At-Berth emissions regulations which are being enhanced between now and 2027.