Overhead bridge cranes haven’t gained the acceptance at container ports that rail-mounted gantry and rubber tire gantry cranes have, but they form the basis of a new concept in container terminal design.

Frans Koch, CEO of Koch Consultancy Group in The Netherlands, believes his design will help revamp existing terminals to boost productivity and efficiency, especially as a new generation of mega-container ships challenge existing facilities. His design concepts can be applied to new terminals as well.

“There is worldwide recognition that further increases in the scale of shipping will demand a fundamentally new approach to container terminals as such factors as the outreach of the cranes and the maximum load on the quays are nearing their natural limits,” says Koch. 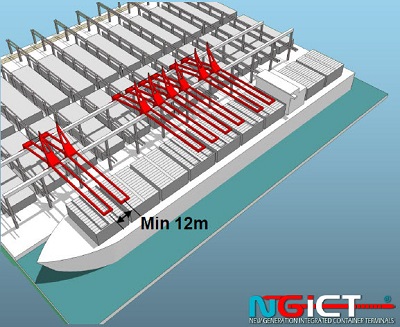 The NGICT concept is suitable for reconstructing existing terminals. For example, a terminal originally designed as a straddle carrier terminal can be modified by replacing old straddle carriers with a system of two-directional automated guided vehicles (AGVs) to achieve a much higher stacking capacity and processing speed.

Alternatively, the concept can be employed if an old terminal quay wall needs to be reinforced to withstand the increasing loads of the ship-to-shore gantry cranes or to permit dredging work to increase the depth of the harbor. In this case, an alternative solution is to build a fixed support structure about 30 meters (98 feet) inland from the quay where each pillar has its own foundation.

Yet another example is a terminal where the site paving needs to be replaced, says Koch. “This might be a good time to switch to the new concept for the stacking area incorporating the special overhead cranes. All transport in this new concept takes place through the air so that the demands on the site paving and drainage are much less pressing and might even perhaps be ignored.”

Koch says the operating cost per TEU will be appreciably lower with the NGICT concept than in other modern terminals currently under construction. Simulation models have been used to confirm comparable productivity with the new concept.

“The NGICT configuration offers terminal operators the most solid answer to the requirement of increasingly shorter mooring times for increasingly larger container ships, and without congestion occurring in parts of the process anywhere on the terminal.”

Koch believes his idea of converting traditional stack areas into a NGICT concept in phases has a high implementation potential coupled with the potential for a significant energy use reduction. The energy savings are being achieved by the much lower weight of the means of transport: The overhead bridge cranes weigh approximately 35 tons as opposed to 235 tons for the most modern automatic stacking cranes such as rail-mounted gantry cranes (RMGs) at a span of nine to 10 containers wide.

“Terminals perform differently over the course of a year, but even the fastest terminals do not fulfill the expectations of shipping companies. A significant increase in handling speed requires more than improving the efficiency of each ship-to-shore (STS) crane. First of all, one needs more STS cranes working on one ship at the same time. But to stay flexible in changing between the bays of the ship, the STS crane modules are as narrow as the width of one bay. That’s exactly the point where our NGICT concept starts.”

The main characteristics of the concept are:

•    Narrow STS cranes on high-positioned rails that are able to work in adjacent bays of a ship.
•    A fixed support structure in the STS area with waterside columns around 30m (98 feet) behind the quay wall.
•    Complete integration of the STS area and the stack area. This reduces travel distances for individual containers.
•    STS cranes put containers on top of a two-directional AGV which operates parallel to a quay until the designated stack lane has been reached. At this point, the AGV drives over a short distance in the perpendicular direction until a container is underneath the stack overhead bridge crane.
•    The special stack overhead bridge cranes can pass each other in the same lane and drive perpendicular to the quay from an STS area to a truck and train area. This way, no other horizontal transport devices are needed at ground level.

“Simulations carried out by TBA Netherlands have shown that a current STS crane working with two-directional AGVs could increase productivity by almost 70 percent, while the number of AGVs per quay crane can be reduced by half,” says Koch.

For a block within the stack area that consists of six stack lanes (180 meters (590 feet) wide and 300 meters (984 feet) long) with two overhead bridge cranes per stack lane (12 in total), the investment will be at least 20 percent lower than a traditional configuration with 10 RMGs in an area of the same size, says Koch. “The savings on operational costs per TEU are much higher.” – MarEx 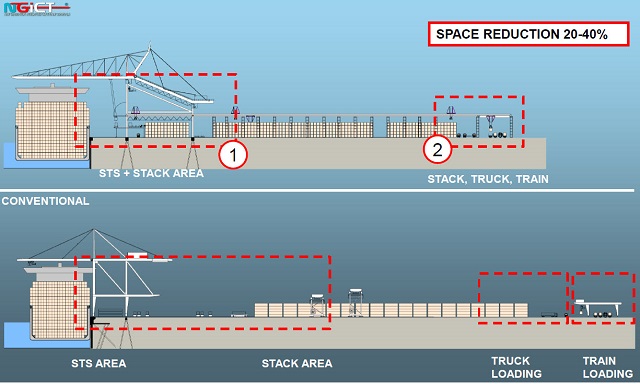