Moving Towards a Ballast-Free Future

Peru is the latest state to have acceded to the 2004 IMO Ballast Water Management Convention, bringing the entry-into-force conditions closer: 34.87 percent of the world's merchant fleet tonnage.

The Convention’s entry into force, at 35 percent, will require the retrofit of expensive new treatment equipment (over a five year period) on around 70,000 ships.

For newbuilds, however, a range of low-ballast or ballast-free designs have emerged over the last decade. Whether they will be taken up remains to be seen, but innovation continues, most recently with a design by Nobu Su, chairman of Today Makes Tomorrow.

Hybrid Ship, a new design by Su, minimizes the transfer of aquatic organisms by enabling a ship to sail with reduced ballast, at least part of the time. The design involves the addition of retractable duct propellers for low-speed ballast voyages that carry about one tenth of the ballast water typically required.

Designs for the Future 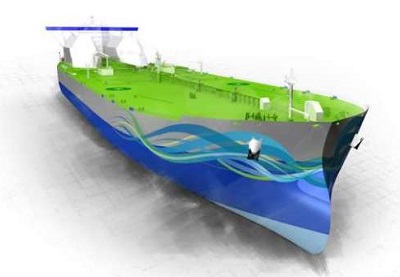 DNV GL developed the ballast-free Triality VLCC design as a cost effective alternative to installing a ballast water treatment system on tankers of the future. Triality is designed to be environmentally superior, technically feasible, practically operational and cost effective.

DNV GL has also developed a low-ballast design for a container ship with a 6,200teu capacity. This Quantum concept vessel may be suitable a wide range of trading patterns including, for example, the Europe to East Coast South America service. The reduced ballast capacity was partially achieved through a wide beam but the need for ballast water for stability is eliminated for most loading conditions.

The development of a Non-Ballast Water Ship (NOBS) design by the Shipbuilding Research Centre of Japan (SRC) demonstrated that it was possible to design a vessel that was ballast-free vessel, but the resulting ship’s breadth was far wider than conventional ships. In 2009, SRC began to develop a minimal ballast water ship (MIBS) design did does not greatly differ from the dimensions of existing ships. The design required significantly less ballast water than conventional ships. 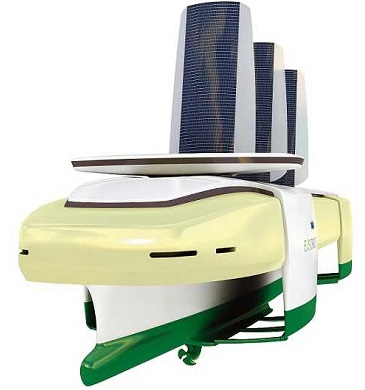 Wallenius Wilhelmsen Logistics has developed a car carrier design, Orcelle, that does not require ballast water and does not release any emissions into the atmosphere or into the ocean. The idea combines fuel cells, wind, solar and wave power to propel the vessel. While the vessel is unlikely to be built in its entirety, the company hopes that many of its attributes could be incorporated in to future vessel designs.

Professor Michael Parsons of the University of Michigan developed a Variable Buoyancy Ship concept for a seaway-sized bulk carrier that has trunks running the length of the hull which are open to the sea when no cargo is carried. The design has three longitudinal trunks per side, in a deepened hull, to provide safe operating drafts. The pressure difference between bow and stern induces a flow of seawater that is exchanged about once an hour. 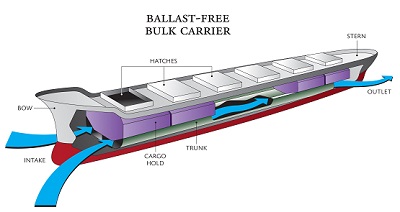 Without the usual bulkheads, though, concerns were raised about the damage stability of the design, and Parsons altered the design to include isolation valves to the two outward-most trunks on each side.

Yokohama National University developed an alternative system employing buoyancy control compartments with exit valves at the bottom. Each tank is free-flowing and the design avoids large longitudinal flows through the hull. The risk of valve failure and the potential for locations within the tanks that do not flush adequately seems to remain.

Saudi Arabian tanker owner, Vela International Marine, developed an automatic ballast exchange system for VLCCs. The Aubalex system expels ballast water species within 500 miles of their uptake and attaches directly to the ship’s existing ballast system at the forward end of the ballast pipeline. The system consists of a central pipeline system and a bow access opening that allows water to enter at the bow’s stem. The water is discharged overboard at the tank top.