Maersk Line is said to have reached an agreement with Daewoo Shipbuilding & Marine Engineering (DSME) for an order of up to 11 mega container ships with a capacity of around 20,000 TEU.

According to The Wall Street Journal, the price for each is expected to be a record low of around $151 million each.

With this order, expected to be officially announced this month, South Korean shipyards increase their lead in the mega container market for ships exceeding 20,000 TEU. However, the nation faces growing competition from Japan.

So far, similar-sized vessels have been ordered with South Korean yards Samsung Heavy Industries (SHI) and the Philippines’ Subic Shipyard of Hanjin Heavy Industries, while Japan’s Imabari Shipbuilding has also secured an order.

SHI was the first South Korean shipyard to win an order, and the company has now received orders for 10 vessels including the largest vessel to date of 21,100 TEU. 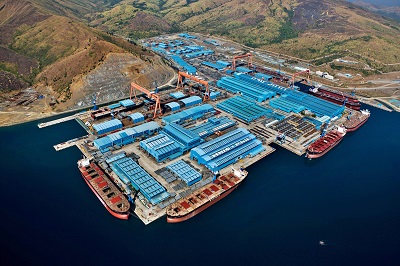 Another Record for SHI

SHI announced in April that it had received an order for six 21,100 TEU ultra-large container ships from OOCL (Hong Kong) valued at about $950 million (approximately $158 million each). This contract includes options for six units, so it is likely that the company will receive additional related orders.

The newly ordered ships are 400 meters (1,312 feet) long and 58.8 meters (192 feet) wide, a similar specification to the 20,100 TEU ships previously ordered. However, the newly ordered ones can load 1,000 more 20-feet containers, as they accommodate one more layer of containers.

The ships will also be equipped with a number of energy-saving systems, including propellers, rudder bulbs and stators developed by SHI and will be delivered by November 2017.

The order renewed the record the company had set just one month earlier, when it received orders for four 20,100 TEU container ships from MOL of Japan on March 2, 2015.

In March, the company celebrated the delivery of the largest container ship so far built in Japan, the 14,000 TEU Millau Bride, built for K-Line.

At the end of last year South Korea’s Hyundai Heavy Industries delivered what was then the world’s largest container ship, the first of five 19,000 TEU container ships ordered from China Shipping Container Lines.

Another 30 orders for 20,000 TEU vessels are expected globally this year, reports the Korea Herald.