More Arctic sea ice is entering the North Atlantic Ocean than before, making it increasingly dangerous for ships to navigate those waters in late spring, according to new research.

Ocean passages typically plugged with ice in the winter and spring are opening up. Sea ice normally locked in the Arctic then can flow freely through these passages southward to routes used by shipping, fishing and ferries. Arctic sea ice surged through these channels in 2017 and clogged normally open areas of ocean around Newfoundland in May and June. The ice cover trapped many unsuspecting ships and sunk some boats when the ice punctured their hulls.

The study authors predict last year’s events could occur more often in the future as Arctic temperatures continue to rise. David Barber, an Arctic climate researcher at the University of Manitoba, Canada, said, “This is something we need to better prepare for in the future, because we expect this phenomenon to go on for at least a couple more decades as we transition to an ice-free Arctic in the summer.”

A drone image of the Canadian Research Icebreaker Amundsen among sea ice off the Newfoundland coast. Credit: David G. Barber.

Winter sea ice is common in the North Atlantic Ocean, but ice typically melts by May of each year. Shipping, fishing and ferry activity picks up around this time, and vessels normally travel through coastal waters unimpeded. In 2017, the ice was much thicker than usual – up to eight meters (26 feet) thick in some cases.

Off the Newfoundland coast, an unprecedented number of ships, fishing vessels and ferry boats became trapped in the ice. In early June, the Canadian coast guard pulled the research icebreaker Amundsen off its scientific expedition to escort ferries caught in the congested seas to open water. The vessel was also used to conduct search and rescue operations for stranded passengers of ferry boats and ships trapped in the ice, as it was the only large icebreaker available at the time. 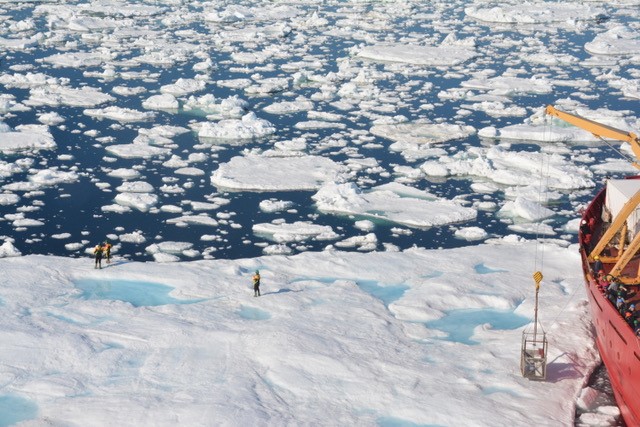 A drone image of the Amundsen with scientists deployed onto the sea ice. Credit: David G. Barber.

Between search and rescue missions, Barber and other scientists aboard the Amundsen used the ship’s research equipment to determine where the sea ice had come from and why so much ice was there.

Ice arches are natural dams that form in narrow Arctic channels like Lancaster Sound and the Nares Strait in the winter. The arches keep most sea ice from moving southward. Previous research found ice arches failed to form in the Nares Strait in 2007 and a record amount of sea ice flowed south that year.

According to the new study, something similar happened in 2017: The sea ice around Newfoundland had features of ice found only in the high Arctic. The ice likely formed in the Lincoln Sea just north of Greenland, more than 3,000 kilometers (1,800 miles) north of Newfoundland.

The sea ice the authors sampled would have had to travel freely through the Nares Strait to make it to Baffin Bay and eventually to Newfoundland, which could only have happened if ice arches had failed to form. 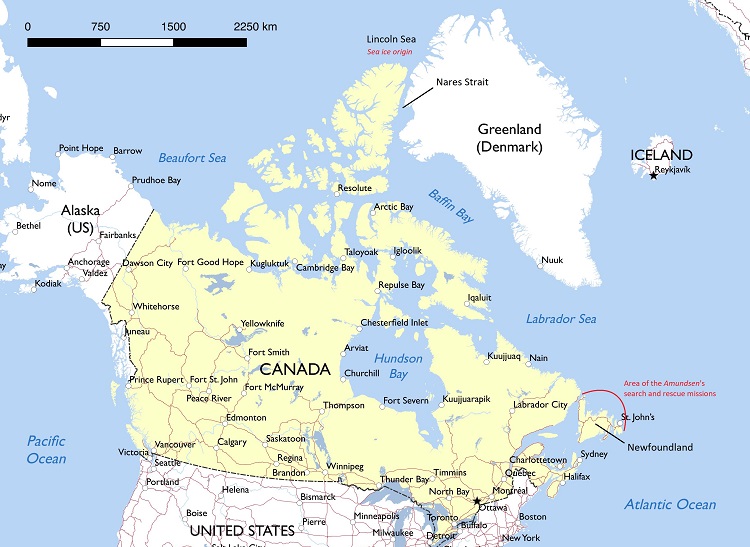 This map shows where the Arctic sea ice originated, in the Lincoln Sea north of Greenland. From there, the ice traveled south through the Nares Strait, Baffin Bay and the Labrador Sea to reach the coast of Newfoundland. Credit: Mapswire, CC BY 4.0.

The study authors conclude that warming temperatures due to climate change are making it more difficult for ice arches to form every winter, preventing them from blocking the southward flow of sea ice. Warming temperatures are also changing ocean and atmospheric circulation in the Arctic, making sea ice more mobile.

Barber and other researchers have been monitoring the ice closely and don’t expect as much ice to travel south in 2018.