Japan’s Mitsui O.S.K. Lines is providing its first update and information on the performance of the first hard sail fitted on a large bulker. The vessel completed its first trip from Japan and Australia in October and after loading coal is approaching Japan on the return leg of its maiden voyage.

“After collecting data of one round voyage, analysis and evaluation of the sail performance will be carried out,” MOL wrote in its brief update. “The simple analysis shows it is as effective as expected.”

The 100,000 dwt bulk carrier Shofu Maru is carrying out the first-ever voyages of the hard sail designed to provide wind assistance to the vessel’s propulsion. The vessel, which measures 770 feet in length, is fitted with a single retractable sail forward of the cargo hatches. The sail is made of fiber-reinforced plastic and mounted in four sections. Each section is approximately 50 feet wide. When fully extended the sail rises to a full height of approximately 170 feet from the deck. The automated system is designed to detect wind conditions and maximize the sail’s positioning to improve performance.

Starting as a university research project, the concept for what is known as the Wind Challenger has been in development for over a decade. MOL working with Oshima Shipyard has been leading the project and is now testing the sail to determine its performance in normal operating conditions. They had previously projected that it would realize a five percent energy savings while operating between Japan and Australia. On a transpacific sailing from Japan, they believe the strong wind condition will increase savings to eight percent. 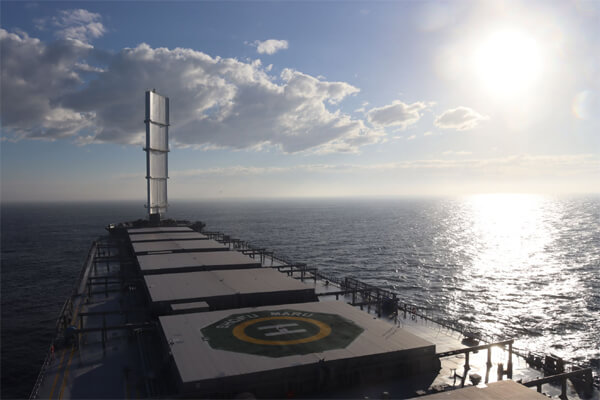 “Although there have been minor problems, such as failure of the limit switch for detecting sail conditions, the ship’s crew and on-board engineers (MOL Technical Div and Oshima Shipbuilding) have been carrying out repair works and adjustments,” MOL reports. “The sail operation rate has been maintained at a high level of approximately 70 percent.”

After loading coal, the Shofu Maru departed Newcastle, Australia on October 25. At the last report, she was operating at a speed of approximately 11 knots. MOL posted that the vessel is “now sailing smoothly for a customer’s discharging terminal.” She is expected to arrive in Japan on November 14 marking the completion of the inaugural voyage.