The shipping industry continues to find itself on the front lines of the Mexican government’s ongoing efforts against the smuggling of illegal narcotics. The latest reports are again coming from the Pacific ports on the west coast of Mexico.

The Mexican Navy, which acts as the country’s coast guard, reported a new seizure of cocaine in a joint effort with the National Maritime Authority, Customs and the Port Protection unit for Lázaro Cárdenas, the port city in Michoacán.

The authorities discovered and seized 162 kilograms of cocaine after searching a coal shipment being offloaded from the Panamanian-flagged bulk carrier ES Jupiter. The 37,000 DWT bulker had arrived in Mexico from Buena Ventura, Colombia on July 7 and began to offload its cargo.

The Mexican Navy (SEMAR) reported the discovery of three bags with 140 packs wrapped in bricks buried in the coal shipment. Testing confirmed it as cocaine. 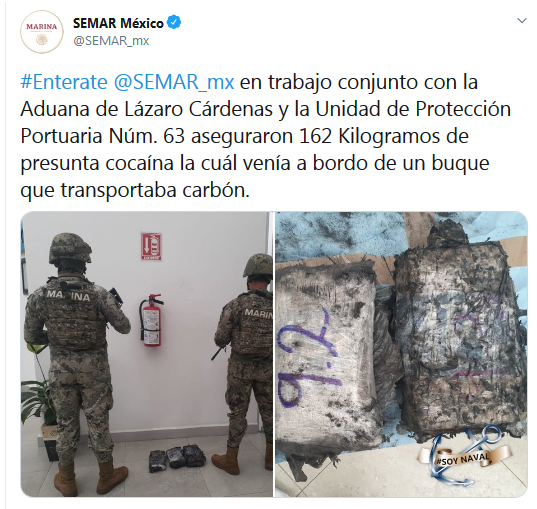 News of this seizure comes just a week after the Mexican authorities discovered another smuggling operation involving a container aboard the Svendborg Maersk after she arrived at the port of Manzanillo in the Colima region of Mexico on July 2, 2020. At the time that incident was called unusual as they found two men in the container with the illegal narcotics.

The Mexican authorities announced additional details of the incident in Manzanillo. According to the Attorney General’s office, the guards in the port became suspicious when two men employed in the port did not leave the area at the end of their shifts. It was discovered that they had broken a lock to board the Svendborg Maersk and entered a container.

They planned to remain in hiding aboard the vessel until it sailed for Yokohama, Japan. They were then going to jump from the deck of the ship into the water with the cocaine and a GPS beacon that would permit their accomplices using a speedboat to find them and transport the narcotics to shore.

The Svendborg Maersk was permitted to depart Mexico after the investigation while the ES Jupiter remains in Mexico.