The Mayflower Autonomous Ship arrived in Halifax, Canada on June 5 completing its historic Atlantic crossing and becoming the largest unmanned craft to complete the Atlantic crossing. It also is providing valuable data to advance autonomous navigation and AI technology.

"The journey she made across was arduous,” said project director Brett Phaneuf and founding board member of ProMare the non-profit maritime research organization that led the effort. He emphasized that the AI technology that navigated the craft was continuing to function, but they had experienced “intermittent, low-level failures,” prompting the decision to divert to Canada and end the voyage with a tow into Halifax. “We decided not to tempt fate.”

The Mayflower completed a voyage they estimated at 3,490 miles in 40 days with an unplanned two-week layover in the Azores after they detected mechanical failures. After tests and refueling, the voyage resumed. 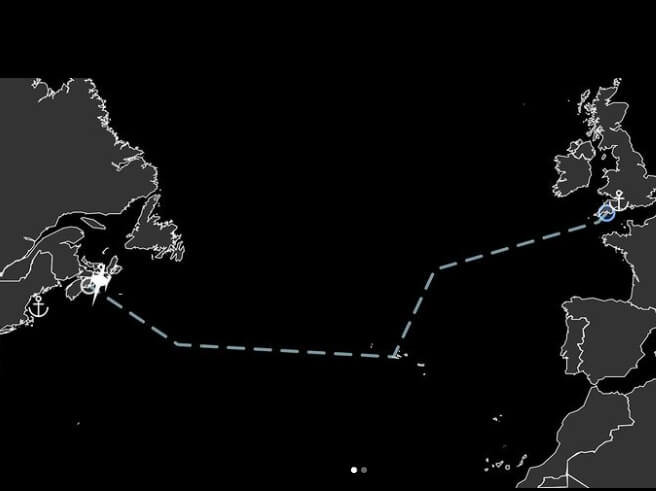 #Mayflower400 @AI_Mayflower Mayflower is being towed. Here is a look at her track as they make their way to Halifax. Follow Live including video at - https://t.co/UiuENGbHcQ pic.twitter.com/358P4zSSGi

Less than 1,000 miles from North America they began to experience additional power problems forcing the vessel onto backup systems. Halifax was selected as a port of refuge after the current problems occurred. After clearing a heavy storm, the team decided to take up an opportunity and had a Dominion diving vessel meet up with the Mayflower and bring it in the last 186 miles.

“We are thrilled that our ship completed the endurance challenge of being the first self-directed autonomous ship to cross the Atlantic Ocean,” wrote ProMare in its announcement of the completion of the voyage. “The project has been helped by many sponsors, volunteers, and academic institutions. But we'd like to begin by thanking our tired watchkeepers, many of whom have been involved in the engineering of the ship and creating the software that runs it.”

While they did not reach their intended target of Washington, D.C., the team points out that the voyage “has taught us a great deal about designing, building, and operating a ship of this nature and the future of the maritime enterprise." IBM, which designed the AI system added that “The AI Captain is also the crux of why we at IBM believe that MAS’s experimental voyage will be a catalyst for the advancement of AI and AI-powered automation at the edge in various applications across industry.”

The Mayflower was outfitted with six AI-powered cameras, more than 30 sensors, and 15 edge devices, all of which input into actionable recommendations for the AI Captain to interpret and analyze. The data coming from the sensors and the programming of the systems made it possible for the AI Captain to adhere to maritime law while making crucial split-second decisions, like rerouting itself around hazards or marine animals, all without human interaction or intervention. Further, the AI Captain learned from data, postulated alternative choices, assessed and optimized decisions, while managing risk to complete the crossing.

The project started in 2016 with the goal of reducing the cost of marine data collection through artificial intelligence, Phaneuf said. Following two years of design, construction, and AI model training, the Mayflower was launched in September 2020. A 2021 attempt at the crossing was aborted after just three days due to the failure of a power coupling.

The team reports that they will conduct additional testing to diagnose the current problem and make repairs. After a stay in Halifax that could last up to three weeks, they hope to sail to Massachusetts and later Washington, D.C. The Mayflower will remain in the United States to conduct additional ocean research after this voyage is completed.