He will be replaced by Deputy Defence Secretary Patrick Shanahan. Shanahan, a former executive at Boeing, joined the Pentagon in July 2017 after Trump nominated him. He is reportedly a supporter of Trump's plan to establish a space force. 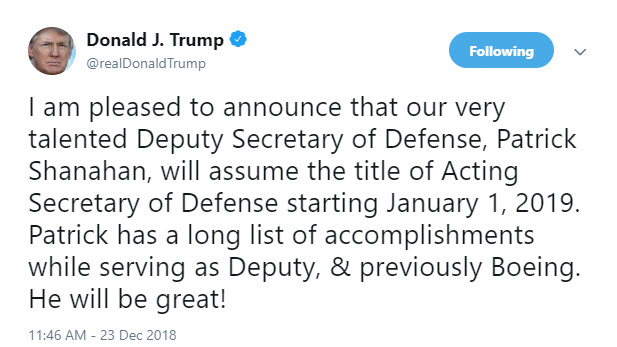 Mattis resigned following Trump's announcement of the withdrawal of American troops from Syria and Afghanistan. In his resignation letter, Mattis recognizes the importance of U.S. allies and highlights the need to continue mutual support:

“One core belief I have always held is that our strength as a nation is inextricably linked to the strength of our unique and comprehensive system of alliances and partnerships... NATO's 29 democracies demonstrated that strength in their commitment to fighting alongside us following the 9-11 attack on America. The Defeat-ISIS coalition of 74 nations is further proof.

“Because you have the right to have a Secretary of Defence whose views are better aligned with yours on these and other subjects, I believe it is right for me to step down from my position.” 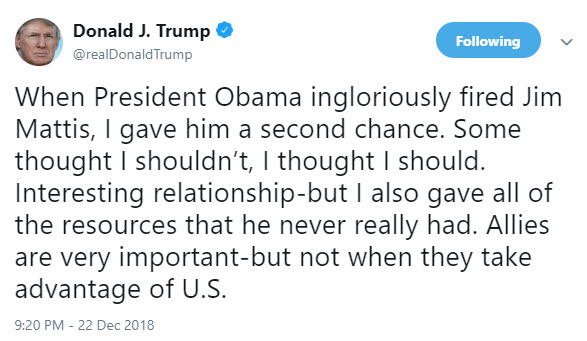 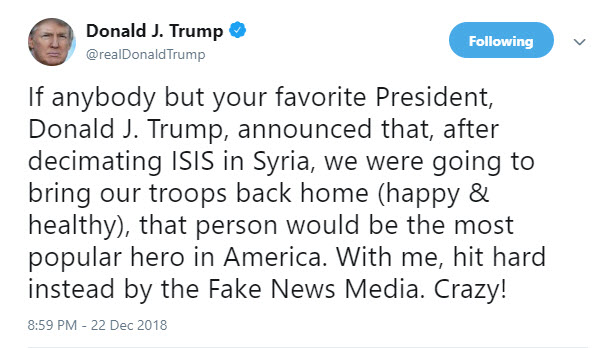 Some highlights of Mattis' military career:

Mattis enlisted in the Marine Corps Reserve in 1969. He is a graduate of the U.S. Marine Corps Amphibious Warfare School, U.S. Marine Corps Command and Staff College and the National War College. Upon promotion to the rank of lieutenant colonel, Mattis commanded 1st Battalion, 7th Marines, one of Task Force Ripper's assault battalions during the Persian Gulf War. In Afghanistan, as a colonel, Mattis commanded the 7th Marine Regiment. He then led the 1st Marine Expeditionary Brigade as its commanding officer upon promotion to brigadier general. It was as a regimental commander that he earned his nickname and call sign, "CHAOS", an acronym for "Colonel Has Another Outstanding Solution", which was initially somewhat tongue-in-cheek.

During the initial planning for the War in Afghanistan, Mattis led Task Force 58 in operations in the southern part of the country beginning in November 2001, becoming the first Marine Corps officer to command a Naval Task Force in combat.

While serving in Afghanistan as a brigadier general, Mattis was known as an officer who engaged his men with "real leadership." He was also quoted as saying: "be polite, be courteous and have a plan to kill everyone you meet." A young Marine officer, Nathaniel Fick, said he witnessed Mattis in a fighting hole talking with a sergeant and lance corporal: "No one would have questioned Mattis if he'd slept eight hours each night in a private room, to be woken each morning by an aide who ironed his uniforms and heated his MREs. But there he was, in the middle of a freezing night, out on the lines with his Marines."

I have been privileged to serve as our country's 26th Secretary of Defence which has allowed me to serve alongside our men and women of the Department in defence of our citizens and our ideals.

I am proud of the progress that has been made over the past two years on some of the key goals articulated in our National Defence Strategy: putting the Department on a more sound budgetary footing, improving readiness and lethality in our forces, and reforming the Department's business practices for greater performance. Our troops continue to provide the capabilities needed to prevail in conflict and sustain strong US global influence.

One core belief I have always held is that our strength as a nation is inextricably linked to the strength of our unique and comprehensive system of alliances and partnerships. While the US remains the indispensable nation in the free world, we cannot protect our interests or serve that role effectively without maintaining strong alliances and showing respect to those allies. Like you, I have said from the beginning that the armed forces of the United States should not be the policeman of the world. Instead, we must use all tools of American power to provide for the common defence, including providing effective leadership to our alliances. NATO's 29 democracies demonstrated that strength in their commitment to fighting alongside us following the 9-11 attack on America. The Defeat-ISIS coalition of 74 nations is further proof.

Similarly, I believe we must be resolute and unambiguous in our approach to those countries whose strategic interests are increasingly in tension with ours. It is clear that China and Russia, for example, want to shape a world consistent with their authoritarian model — gaining veto authority over other nations' economic, diplomatic, and security decisions — to promote their own interests at the expense of their neighbours, America and our allies. That is why we must use all the tools of American power to provide for the common defence.

My views on treating allies with respect and also being clear-eyed about both malign actors and strategic competitors are strongly held and informed by over four decades of immersion in these issues. We must do everything possible to advance an international order that is most conducive to our security, prosperity and values, and we are strengthened in this effort by the solidarity of our alliances.

Because you have the right to have a Secretary of Defence whose views are better aligned with yours on these and other subjects, I believe it is right for me to step down from my position. The end date for my tenure is February 28, 2019, a date that should allow sufficient time for a successor to be nominated and confirmed as well as to make sure the Department's interests are properly articulated and protected at upcoming events to include Congressional posture hearings and the NATO Defence Ministerial meeting in February. Further, that a full transition to a new Secretary of Defence occurs well in advance of the transition of Chairman of the Joint Chiefs of Staff in September in order to ensure stability within the Department.

I pledge my full effort to a smooth transition that ensures the needs and interests of the 2.15 million Service Members and 732,079 DoD civilians receive undistracted attention of the Department at all times so that they can fulfill their critical, round-the-clock mission to protect the American people.

I very much appreciate this opportunity to serve the nation and our men and women in uniform.