The UK Marine Accident Investigation Branch (MAIB) has completed its inquiry into the blast aboard the chemical tanker Stolt Groenland in 2019, finding that heated cargo tanks in nearby compartments likely caused dangerous warming of a temperature-sensitive cargo.

On September 28, 2019, a cargo tank containing styrene monomer on board the Cayman Islands-registered chemical tanker Stolt Groenland ruptured while she was alongside at the port of Ulsan, South Korea. A spontaneous, runaway polymerization reaction - the reaction of styrene molecules with each other to form polystyrene - caused the temperature and pressure in the tank to increase exponentially, rupturing the tank through the main deck and the bulkhead with an adjacent empty cargo tank. 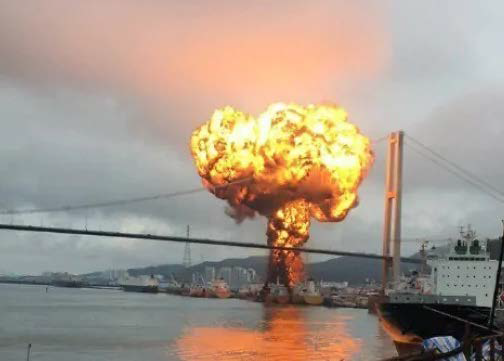 The monomer vapor ignited almost immediately, resulting in two explosions in quick succession. The second blast blew the O/S on gangway watch over the starboard side guardrail; he hung on for a moment, but decided to let go because of the heat of the fire. He fell into the water between the vessel and the quay, and he climbed up onto a fender to get back onto dry land.

The chief mate sounded the fire alarm to muster the crew, then turned on the deck foam monitor system and (with the third mate) directed the monitors at the cargo manifold. Shortly after, the master ordered abandon ship, and the crew boarded the vessel's free-fall lifeboat and made a successful escape.

The crew of the adjacent product tanker Bow Dalian also abandoned ship when gobs of burning polystyrene rained down onto their main deck. The Dalian and her crew were otherwise unharmed. 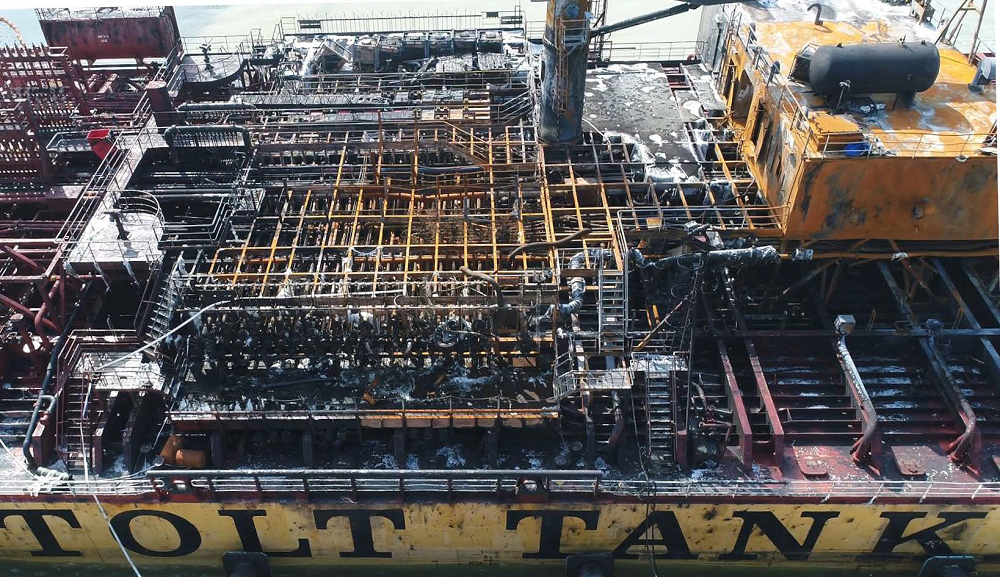 Styrene polymers (dimers) and inhibitor compound were found in residue obtained from the coveralls worn by a Bow Dalian crewmember during the incident. This (and the presence of polystyrene blobs and drips all over the area) confirmed that the styrene had reacted with itself in a runaway polymerization reaction. That the inhibitor was present - and likely in adequate quantity - pointed to improper storage practices as the cause of the reaction, the lab report said.

An analysis of the tank temperature records from Stolt Groenland found that the temperature in tank 9S (the tank containing styrene) began to rise several days after the crew initiated cargo heating in tanks 8P, 9P, 10P, 11P and 7S. While none of these tanks were directly adjacent to 9S, the crew assessed that it would be acceptable to heat nearby tanks so long as they were separated by one compartment. After styrene reaches about 60-65 degrees Celcius, it is vulnerable to entering a thermal runaway polymerization reaction, and the cargo paperwork called for maintaining tank temperature below 30 C. The tank reached 50 C three days before the casualty, then 65 C the day before, then soared past 90 C shortly before the explosion.

"That Stolt Groenland’s crew were unaware of the elevated temperatures and polymerization of the styrene monomer in 9S, until warned by the activation of the high-level alarm on the bridge front, indicates that the temperatures of the non-heated cargoes were not monitored at all, and that no temperature alarms were set," concluded MAIB. "Had the temperatures of the styrene monomer been closely monitored and the maximum temperature of [30 C] stated on the certificate of inhibitor been adhered to, this accident would have been avoided."

A similar (but less dramatic) spontaneous heating incident affected a styrene cargo aboard the Stolt-operated tanker Stolt Focus in August 2019, just one month before the incident aboard Stolt Groenland. In the Focus incident, the crew brought the heating problem under control by adding seawater to the cargo, then diluting it with benzene and adding an inhibitor. The cargo came from the same supplier, same port of loading, same shore tank and traveled on a similar trading route, so the MAIB asked Stolt to provide further information on the circumstances. "Stolt refused to do so, as it did not consider the heating and subsequent disposal of the styrene monomer cargo to be a marine accident or marine incident," MAIB said.

On MAIB's recommendation, Stolt has taken on a campaign across its tanker fleet to ensure that its crews are aware of the special handling requirements for temperature-sensitive cargoes, including new reporting requirements to keep the head office apprised of tank temperatures.