Maersk provided a first look at the new design concepts that it will be incorporating into its next-generation boxships. In addition to being outfitted with dual-fuel systems to operate on methanol, Maersk is incorporating a broad range of new designs which it says will enhance all aspects of operations.

Palle Brodsgaard Laursen, Chief Technical Officer for A.P. Moller-Maersk who has been leading the design team explains that the line has been working for nearly five years with its classification society ABS and now the shipyard Hyundai Heavy Industries, which will build the eight ships of the new class. They reported that the new design allows a 20 percent improved energy efficiency per transported container when compared to the industry average for vessels of this size. Further, the new class will provide approximately a 10 percent improvement in efficiency over Maersk’s first 15,000 TEU Hong Kong class.

Among the unique features that Maersk is incorporating into the new class of ships is the relocation of the accommodations block and navigation bridge to the front of the ship. The funnel is also being placed aft and only on one side. The placement of the blocks is designed to increase both the capacity and efficiency of the container handling operations.

Laursen notes that the design concepts have been used on small vessels but this will be the first time they are applied on a vessel of this size. To enable this new design, several challenges had to be addressed. Crew comfort had to be ensured with the accommodation placed in this more exposed location, but Larsen says that tests show that while movement will be increased it will be more than acceptable. In fact, he reports that movement in the crew areas will be less than that on some smaller feeder vessels.

The design changes also presented challenges to be overcome in areas including hull strength. Typically, the structure and placement of the accommodation block play a role in hull strength, but in the new designs, they had to come up with alternatives to stiffen the hull. New arrangements for lifeboats and navigational lights also had to be developed.

“When designing these vessels, our ambition was to make sure the new vessels could service our customers in a smarter way while contributing to their carbon-neutral transportation goals,” says Maersk. As previously reported the ships will use dual-fuel engines developed by MAN with the intent being to operate full time on methanol, although they can also use traditional low sulfur fuel when methanol is not available. The vessels will have a 16,000 m3 tank meaning they are capable of completing a round-trip, for example between Asia and Europe, on methanol.

The vessels will use the latest technology. To assist in navigation and help the bridge officers have a perspective when maneuvering the design compensates for the bridge placement with the deployment of new cameras to support navigating.

Like the prior Hong Kong class, the new vessels are being built by Hyundai Heavy Industries with the first vessel due in service at the beginning of 2024. The new class has similar dimensions to the prior vessels. The new dual-fuel vessels will be 1,148 feet long with a 175-foot beam. The Hong Kong class is 1,158 feet in length with a 176-foot beam and 178,400 dwt. The older class is rated at 15,226 TEU with the new ships listed at 16,000 TEU. Larsen said Maersk currently has no plans for bigger ships. 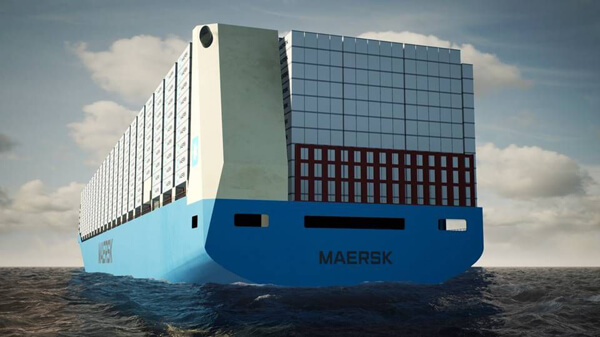 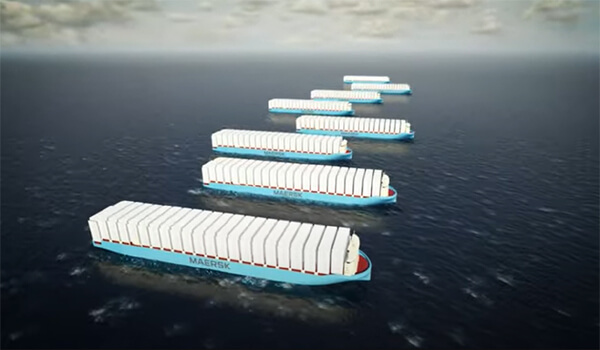