LNG Engines Could Be Stepping Stone to Fuel Cells

The growing adoption of hybrid electric powertrain systems and the projected growth in the number of vessels burning LNG as fuel, could lead to wider adoption of fuel cells with LNG-fuelled engines becoming the stepping stone for the wide adoption of LNG-fuelled fuel cells as prime movers. 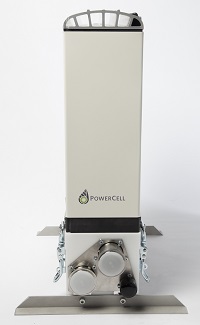 In a most recent demonstration of the uptake of fuel cells, PowerCell Sweden received its first marine order for two PowerCell S3 prototype stacks this month. Swiss Hydrogen will install the fuel cells on a ship powered by photovoltaics.

“Hydrogen gas will replace diesel in a marine industry that is forced to reduce its emissions, said Alexandre Closset, CEO of Swiss Hydrogen, the company that will manufacture the system and certify it for the marine environment.

“The ship in question will be a mobile show-case that describes how effective and reliable the hydrogen gas technology is in marine environments,” he said. It will be supplied with a system that encompasses onboard production of hydrogen gas from solar electricity, storage of hydrogen gas and two fuel cells each one 30 kW amounting to 80 hp.

Per Wassén, CEO of PowerCell Sweden says that more and more countries are demanding fossil-free energy for marine fields of application. The Netherlands has decided to develop fossil-free ferries. Norway, an early user of batteries, is also advanced in establishing fuel cell-powered ships, and over the next few years car ferries, passenger ferries and a fishing boat will be powered by fuel cell technology in Norway.

Fuel cells convert chemical energy to electric power using anodes and cathodes in a way similar to batteries except that they are fuelled continually to produce power continually. They require either pure hydrogen or fuels that can be reformed into hydrogen without the presence of sulfur. This makes pure hydrogen, methanol or LNG obvious fuel choices.

Proton Exchange Membrane (PEM) fuel cells use hydrogen and can be either low or high temperature. High temperature technologies such as molten carbonate and solid oxide fuel cells, each differing in the type of type of electrolyte used, are more flexible and can use methanol, ethanol, natural gas or biogas as well as hydrogen.

Depending on fuel choice, fuel cells can emit carbon monoxide and methane but in quantities significantly lower than combustion engines running on LNG. Hydrogen fuel cells do not emit any carbon compound emissions.

Fuel cells have gained the confidence of the boating and yacht community as reliable auxiliary power providers. Products up to around 5kW are typically used which can run on a variety of fuels including diesel, methanol and hydrogen, and in the very small quantities required for this application, these fuels can be conveniently obtained and stored on board.

However, for commercial applications, fuel is still an issue, and many passenger vessel installations have involved the use of PEM fuel cells and shore-side hydrogen fuelling stations.

The German-funded project e4ships is underway with fuel cell demonstration projects led by Meyer Werft and Thyssenkrupp Marine Systems. The e4ships partners have developed fuel cell systems for seagoing vessels and their experience is being used to support international regulation development to enable basically the use of alternative fuels and fuel cells in international shipping in the future.

In the demonstration project, Pa-X-ell methanol operated high temperature PEM fuel cells for seagoing passenger vessels are being developed and tested at a demonstration plant at the Meyer Werft shipyard. Additionally, a 90 kW system has been installed in addition to the conventional energy supply on the Scandinavian ferry MS Mariella. The fuel cell system is based on standardized modular units which can be scaled by connecting to any performance capacities. This way, the new resulting energy modules will form the basis of a decentralized network onboard in the future.

The focus of the Thyssenkrupp demonstration project SchIBZ is the development of a diesel-operated hybrid fuel cell system with a scalable capacity of 100 to 500 kW for seagoing ships. For a practical test at sea, a 50 kW system has been built in a container and is being tested on the MS Forester. Low-sulfur diesel is employed as a fuel. In the medium term, LNG may become an alternative energy source as well.

Cruise ships are increasingly being built with LNG-fuelled propulsion systems, and last month, cruise ship operator Royal Caribbean revealed that it is developing a new class of ship, the Icon, which will run on LNG-fuelled fuel cells. The new ships will be delivered from Meyer Turku from 2022, but the company will begin testing fuel cell technology on an existing Oasis-class ship in 2017 and will also run progressively larger fuel cell projects on new Quantum class vessels being built in the next several years.

"We believe fuel cells offer very interesting design possibilities," said Harri Kulovaara, RCL's chief of ship design. "As the technology becomes smaller and more efficient, fuel cells become more viable in a significant way to power the ship's hotel functions. We will begin testing those possibilities as soon as we can, and look to maximize their use when Icon class debuts."

Kulovaara said RCL had been eyeing fuel cells for nearly a decade, and believes the technology is now at a stage of development that justifies investment. "There is a long lead time for Icon class, and we will use that time to work with Meyer Turku to adapt fuel cell technology for maritime use." Kulovaara said that additional regulatory standards would also need to be developed for the technology.