Liner Delays and Backlogs Spread Across Most Global Trade Routes

While much of the attention has been focused on the congestion at major ports ranging from Southern California to Felixstowe in the U.K., the backlogs are impacting most of the major trade routes. Beyond the ports in China where much of the trade originates, ports across Asia are showing increasing numbers of vessels waiting for access and globally the delays for liner service reached new heights this summer.

“Most trades show very large increases in delays, indicating that the congestion problems leading to delays are indeed prevalent globally and not isolated to just a few large key trades,” says Alan Muphy, CEO of Sea-Intelligence, a research and analysis firm following the global supply industry. Murphy, however, notes that their latest data shows a very large spread for the extent of the delay across varying trade routes.

Sea-Intelligence’s October update to its Global Liner Performance report illustrates that 32 of the 34 trade routes followed in the report are showing increased delays versus a baseline average from 2016 to 2019. The average delay above the baseline in September was three and a half days, with the Asia to West Coast North America routes showing the longest wait of eight and a half days. Routes between North America and Asia or Europe and Asia are showing the highest increases, which is also impacting many other routes. 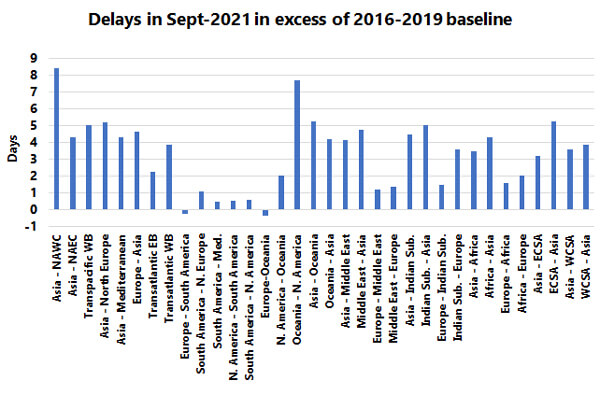 “It can be seen that a few individual trades are not impacted, and essentially have the same magnitude of delays as they had before the pandemic. These, relatively less impacted trade lanes, are mostly connected to South America, from both Europe and North America,” explained Murphy.

Southern California remains the epicenter of the delays. Despite the increasing efforts to increase the movement of containers through the ports of Los Angeles and Long Beach, yesterday, November 2 the San Pedro Bay again tied a record set two weeks ago with 44 containerships waiting beyond the anchorage. Another 33 containerships are in anchorages with a total of 104 vessels of all types waiting for space at the two ports’ terminals. Another 41 vessels, including 19 containerships, are due to arrive before the end of the week with the Marine Exchange of Southern California saying the trend remains stable in the near term.

Bloomberg, which has also been tracking port delays, reports that it sees increasing levels of congestion in ports in Asia outside China. Their calculations show that Singapore is running 22 percent over its normal levels with 53 containerships at anchor on November 1. They are also citing increasing delays in other ports including Malaysia, Indonesia, and the Philippines.

Sea-Intelligence points to early 2020 as the beginning of the global delays tied largely to the beginning of the pandemic. “After a brief period of improvement in summer 2020, the delays then escalated significantly in late 2020 and early 2021,” according to Sea-Intelligence. The problems continued to worsen into the summer and fall of 2021, with the peak of 3.93 days reached in August 2021.

Experts across the supply chain, including recent comments from Maersk, Hapag, and others, all point to the congestion and delays persisting well into 2022.