Last week, the Coast Guard Investigative Service arrested the operator of the charter boat Fishing Lady for violating a U.S. Coast Guard Captain of the Port Order and putting the lives of passengers at risk aboard a leaking vessel.

The captain of the port prohibited the Fishing Lady from sailing commercially after it sank at a pier in Kent Narrows, Maryland. The boat went down as "a result of water ingress due to unauthorized repairs and submersible dewatering pumps failure," according to the Coast Guard, and it stayed at the bottom for a week before it was refloated. The COTP order banned the vessel from leaving the dock until its seaworthiness was certified by Coast Guard marine inspectors.

However, without making the repairs necessary to have the order removed and ensure the safety of the vessel, skipper Terrance Dale Roy allegedly proceeded to take thirty-four paying passengers out over Father’s Day weekend, according to the Coast Guard. During the voyage, the vessel began taking on water faster than it could bail out with its bilge pumps. Marine units from the Grasonville and Kent Island volunteer fire departments arrived on scene and safely rescued all the passengers on board.

A search revealed alleged violations of federal laws and regulations, including the "substandard condition" of the vessel; lack of documentation for commercial service; and operation without a license. The deficiencies observed at the scene allegedly included "lack of a functioning VHF radio to transmit or request for assistance, no operating flares to communicate distress, no operable submersible dewatering pumps, and unauthorized repairs to the vessel." 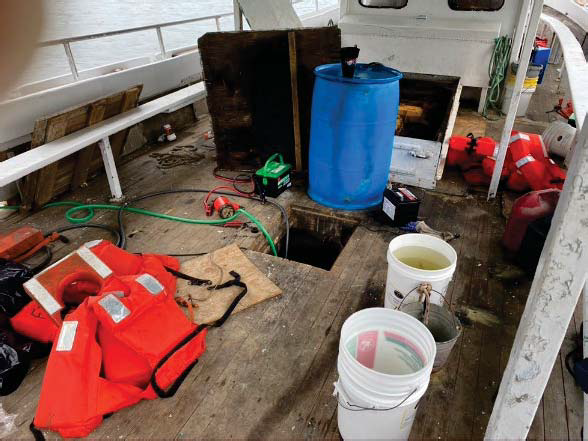 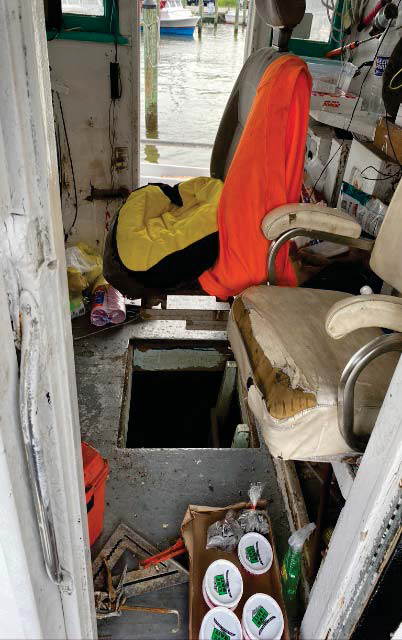 The condition of the wheelhouse (USCG)

In addition to charges of violating a captain of the port order, Roy was charged with failure to properly report a hazardous condition and operating a boat in a grossly negligent manner. He was charged with two felonies and one misdemeanor. If convicted, he could face up to six years in prison for each of the felony charges and up to one year for the misdemeanor charge.

"By departing the pier without correcting the grossly unsafe conditions, the operator put thirty-four passenger lives in grave danger," said Cmdr. Baxter Smoak, chief of prevention for Coast Guard Sector Maryland-National Capital Region. "The Captain of the Port Orders issued to the Fishing Lady were intended to protect the public. Before you step off the pier and onto a boat as a paying passenger, you should ask to see the captain’s license and, if they carry more than six passengers, request to see their Certificate of Inspection."

The Coast Guard vigorously pursues unlicensed charter operations, and the operators of illegal passenger-for-hire vessels can face individual civil penalties ranging from $2,500 to over $95,000.