Video: Last Section of Golden Ray Emerges From the Water

The final section of the wrecked ro/ro Golden Ray is nearly out of the water, and as salvage crews remove cargo and sediment from her vehicle decks, the extent of the damage to the port (bottom-facing) side is emerging into view.

The previous section of the vessel had extensive structural damage and missing hull plating on the upper port side, where the ship came to rest two years ago. Salvors had to fabricate a special cradle as a temporary support for the remaining structure so that it could be set down on a barge and removed from the site.

The same time-intensive adjustments will have to be made for the final section, and the exact dimensions will not be known until after the wreckage has been fully removed from the water. In order to minimize risk and preserve the integrity of the remaining structure, the salvage team is working slowly, hoisting in increments and pausing to shed weight as the wreckage emerges from the water. This process involves pulling wrecked cargo out of the interior of the section and hosing out packed sediment using high-pressure fire monitors.

Once the construction of the additional supports is complete, the section will be stowed and towed to a local response facility for partial dismantling. A heavy-lift barge crane, the Thor, has been mobilized to St. Simons Sound in order to take apart the final two sections piece by piece. These 200-500 tonne chunks will then be floated away to a recycling yard in Louisiana, where they will join the previously removed 4,000-tonne sections of the Golden Ray. 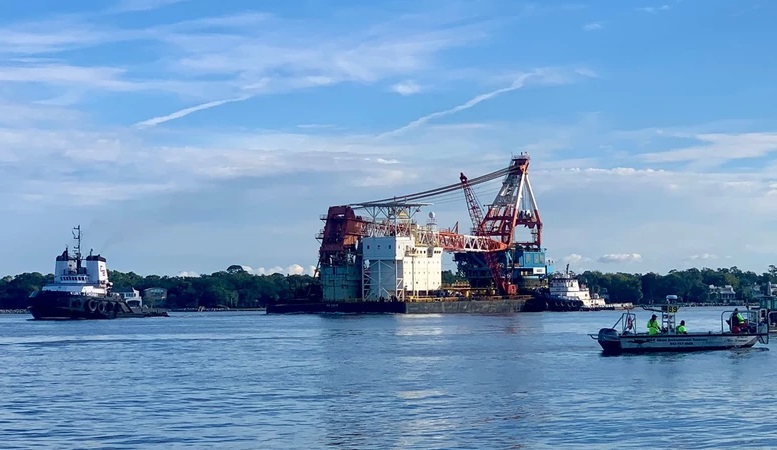 The plan for partial dismantlement appears to be something of a return to the first, discarded plan for the wreck removal. OPA 90 salvor Donjon-Smit originally proposed to cut the Golden Ray up on site, pull the cargo out from the top and ship away the scrap in smaller pieces.

However, in February 2020, the owner set that plan aside in favor of a very different bid from T&T Salvage, which proposed to cut the vessel into eight chunks using an anchor chain and a massive crane barge, the VB 10000. T&T's ambitious proposal was intended to cut down on time and cost, but the project is now on track to surpass the $1 billion mark, making it the second-most-expensive wreck removal in history. The cutting alone took about 300 days, punctuated by spills and fires, and the cleanup will continue for some time.