Satellite imagery and remote sensor data confirm that the Larsen C ice shelf has finally released a giant iceberg, a massive sheet large enough to cover most of Delaware. The shelf has been cracking for years and scientists had long anticipated the event.

The immediate consequences for sea level rise are minimal, and the event's connection to climate change is not clear. "We see no obvious signal that climate warming is causing the whole of Antarctica to break up. However, along the Antarctic Peninsula, where we have seen several decades of warming through the latter half of the 20th century, we have seen these ice shelves collapsing," said Professor David G. Vaughan, director of science for the British Antarctic Survey. 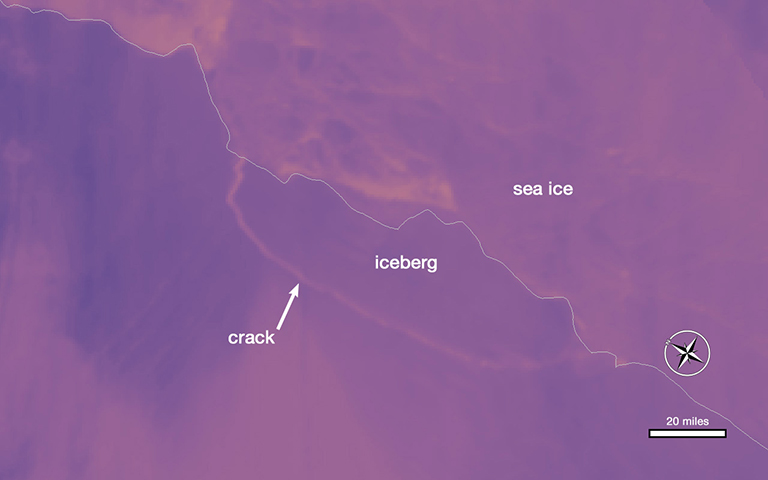 For perspective, the trillion-tonne, 2,200 square mile iceberg contains twice as much water as Lake Erie. It is among the ten largest icebergs ever recorded, and its departure leaves the Larsen C shelf about 12 percent smaller than before.

Scientists say that further calving could cause the shelf to collapse, even if it regrows for a period. Its dissolution could lead to the release of the on-shore glaciers trapped behind it. The nearby shelves Larsen A and Larsen B broke up in 1995 and 2002.

"Although this is a natural event, and we're not aware of any link to human-induced climate change, this puts the ice shelf in a very vulnerable position. This is the furthest back that the ice front has been in recorded history. We're going to be watching very carefully for signs that the rest of the shelf is becoming unstable," said Dr. Martin O'Leary, a glaciologist at Swansea University and a member of the research team that reported the iceberg's formation.

If Larsen C does collapse entirely, and the glaciers behind it flow into the sea, the melting ice would have "an eventual impact on sea levels, but only at a very modest rate," the team reported. As for the iceberg itself, NASA glaciologist Kelly Blunt says that it is unlikely to pose a hazard to navigation. The iceberg is likely to head north with the currents along the coast of the Antarctic Peninsula, then northeast into the South Atlantic.