Russian officials reported that with the assistance of icebreakers, a historic convoy of vessels has completed a voyage across the North Sea Route. Rosatom, which oversees incebreaker operations on the route, reported that it marks the first time in the history of Arctic shipping that a convoy of eight ships passed east to west at this time of the year. As a result, they are reporting that there are now no vessels on the NSR in need of urgent icebreaker assistance.

For some of the vessels, which included cargo ships and tankers, it was weeks of captivity along the route while they waiting for assistance from the icebreakers. The ships have now all made it safely to the Kara Sea.

The nuclear-powered Vaygach began the convoy westward on November 22 escorting, three Russian-flagged general cargo ships, the RZK Constanta, Turukhan, and Grigoriy Shelikhov, from the port of Pevek. Three days later, five additional ships, Kumpula, Selenga, Vladimir Rusanov, Severniy Proect, and Mekhanik Pustoshnyy, joined in to increase the convoy. Included in these ships was a larger Finish bulker, which had entered the Bering Strait in early November but had become stuck waiting for assistance as well as a Russian tanker. The bulker had been transporting construction materials to Rosneft’s oil fields.

Captain of the Vaygach icebreaker, Mikhail Goncharenko, explained some of the challenges during the voyage. “We had to continuously adapt our tactics. All the ships in the convoy became part of one team. The captains understood the situation and performed our commands professionally. Maintaining a gap while keeping close to us was the most difficult aspect for them as they are not used to operating in this way. One of the vessels, Kumpula, was foreign, but there was no language barrier. The Finnish captain spoke English well and followed all our instructions carefully.” 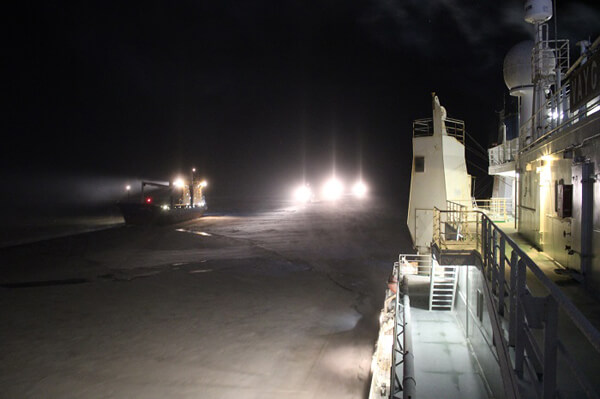 Convoy proceeding through the ice fields on the NSR (Rosatom)

Rosatom reports that the convoy passed through the most difficult parts of the route, the Vilkitsky and Matisen Straits, without issue. On the eleventh day of navigation, the Selenga, a 6,000 gross ton Russian flagged cargo ship, left the convoy in the area of the Taymyr Peninsula and independently made its way to the Sever Bay.

The final leg of the voyage was undertaken by a second icebreaker, the Taymyr, which took over the lead on December 6 while the Vaygach headed to the Gulf of Ob. The following day, the seven remaining vessels cleared the area reaching the western ice edge of the Kara Sea, and independently continued their journey out of the NSR area.

Mustafa Kashka, Director General of FSUE Atomflot, commented: “The coordinated actions of all involved ensured that the vessels received assistance in a timely manner. This voyage has left its mark on Northern Sea Route navigation. We must thank the captain and crew of Vaygach for their professionalism in responding to this situation. On his maiden voyage on the Vaygach, Captain Mikhail Goncharenko demonstrated his skills and experience and has earned his place among the top flight of Arctic captains.”

Once the Taymyr had finished escorting this convoy, she went on to escort two more Russian cargo ships, the Teriberka and Tambey, from the western ice edge of the Kara Sea to the Yenisey Gulf.

While the operation was a success, Russian officials have been calling for a further increase in the icebreaker fleet to meet the goal of maintaining year-round navigation on the North Sea Route.