Kenya runs the risk of losing control of the Port of Mombasa if it should default on loans from state financial institution China Exim Bank, according to a new report from Kenya's auditor general. The terms of a $2.3 billion loan for Kenya Railways Corporation (KRC) specify that the port's assets are collateral, and they are not protected by Kenya's sovereign immunity due to a waiver in the contract.

"The payment arrangement agreement substantively means that the Authority's revenue would be used to pay the Government of Kenya's debt to China Exim bank if the minimum volumes required for [rail] consignment are not met," auditor F.T. Kimani wrote. "The China Exim bank would become a principle over KPA if KRC defaults in its obligations."

In addition, any dispute with China Exim Bank would be handled through an arbitration process in China, not in Kenyan courts. The auditor general expressed concern that the port authority had not disclosed these arrangements in its financial statements. 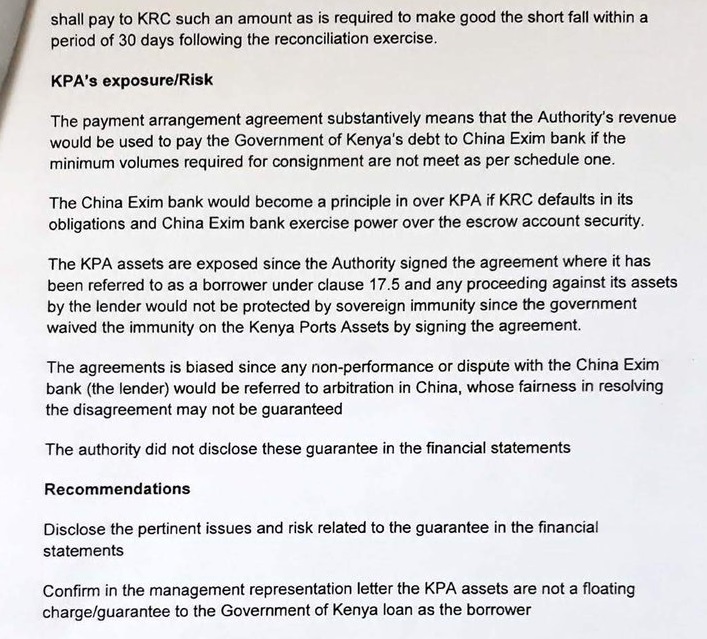 In a social media post, the Auditor General's office emphasized that it had not released the report, which was leaked to the public via unofficial channels. A source within the office told Kenyan outlet Daily Nation that "the issues raised are not conclusive."

In an interview with Kenyan media, KPA managing director Daniel Manduku expressed confidence that the contract clauses would not cause difficulties. "There is no risk of losing the port. In fact, we will pay this loan ahead of time," he said. "We can even take another loan and pay it on time."

The SGR, also known as the Madaraka Express, is a diesel-powered passenger and freight rail service connecting Nairobi and Mombasa. Its construction was  plagued by cost overruns, and outside observers have questioned its economic viability. 80 percent of the project was financed by China.

Kenyan concerns about the transfer of a strategic seaport to China have precedent elsewhere. In December 2017, Sri Lanka handed control of the newly-built port of Hambantota to a Chinese operator in order to satisfy part of its significant debt to Chinese lenders.