Wreck of the Kea Trader Deteriorates

The wreck of the container feeder Kea Trader has shifted and deteriorated further at the site of its grounding on Durand Reef, New Caledonia.

The Trader went aground on the reef last July, and salvors with Ardent have since lightered off most of its oily wastes, fuel, oil and containers. However, the Trader's hull broke in two due to wave action in November, complicating the response effort. The recent passage of Cyclones Gita and Hola caused the fore and aft sections of the hull to shift, collide and break up further, with subsequent release of pollutants and loss of cargo. Holds 2 and 3 were both breached, and Hold 3 has "disintegrated," shipowner Lomar Shipping told local outlet LNC.

An estimated 29 empty boxes were lost to the sea during Cyclone Hola, Lomar said. Authorities broadcast an urgent notice to mariners to warn vessels of the possibility of loose containers in the water. 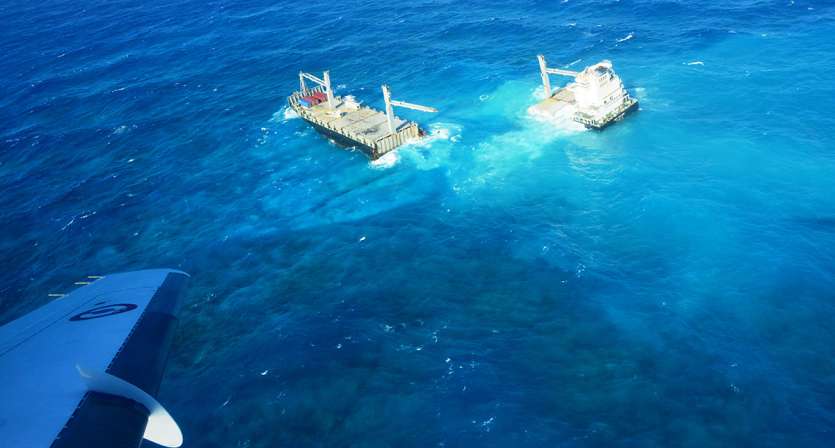 Globules of heavy fuel oil have recently washed up on the island of Maré, and contractors have been dispatched to clean up the pollution. Maré has experienced several waves of floating tarballs arriving on its beaches over the past month, including an instance on February 23 that deposited about 60 kg of material. As a precautionary measure, the local authorities imposed a temporary ban on swimming at the affected beaches.

Globules of hydrocarbons that washed ashore in Maré (EPLP)

Lomar Shipping has contracted with Shanghai Salvage (SSC) for the final removal of the Kea Trader's wreckage from the reef. The Chinese state-owned salvage company has proposed a method to "secure" the wreck's pieces and take them to China for final dismantling. The government of Nouvelle Caledonia has approved the plan, and Shanghai Salvage's assets will be on site next month. Ardent will continue in a caretaker capacity until SSC's operations are under way.

Local environmental coalition Ensemble pour la Planète (EPLP) noted that Shanghai Salvage's bid was about 40 percent below those tendered by European and American competitors. The group asserted that no matter how cost-effective it might be, the lowest bidder's plan must still be environmentally responsible.