Professor Tsumoru Shintake at the Okinawa Institute of Science and Technology Graduate University in Japan aims to revolutionize energy production in Japan through the use of wave and current energy generation technology, some of which resembles flowers.

Firstly, Shintake aims to harness energy from the Kuroshio ocean current that flows from the eastern coast of Taiwan and around the southern parts of Japan. This “Sea Horse” project uses submerged turbines anchored to the sea floor through mooring cables that convert the kinetic energy of sustained natural currents into usable electricity. An initial test has proved successful, and he is now searching for industry partners to continue. 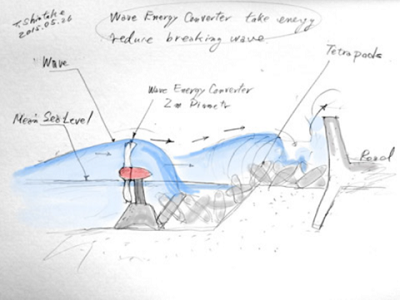 Next on Shintake's agenda is wave energy. Tetrapods, concrete structures shaped somewhat like pyramids that are placed along a coastline to weaken the force of incoming waves and protect the shore from erosion, are common in Japan, as are breakwaters (wave breaker walls). “Surprisingly, 30 percent of the seashore in mainland Japan is covered with tetrapods and wave breakers,” he says. Replacing these with “intelligent” tetrapods and wave breakers, Shintake explains, with turbines attached to or near them, would both generate energy and help to protect the coasts.

Using just one percent of the seashore of mainland Japan can generate about 10 gigawats of energy, which is equivalent to 10 nuclear power plants,” says Shintake. “That’s huge.”

Shintake and his team of researchers launched The Wave Energy Converter (WEC) project in 2013. The project involves placing turbines at key locations near the shoreline, such as nearby tetrapods or among coral reefs, to generate energy. Placed in front of tetrapods, the turbines transform the energy from incoming waves into usable electricity. This in turn dissipates wave strength and protects the shoreline.

Coral reefs are another location with strong breaking waves. Water moving from the deep sea over a shallow reef creates fast jet flows of water. Arrays of small wave energy converters will harness electricity from the vortex flow of breaking waves. The design—dark-colored blades on top of white bodies with thin stems—is visually pleasing, and resembles a flock of birds or group of flowers, says Shintake. 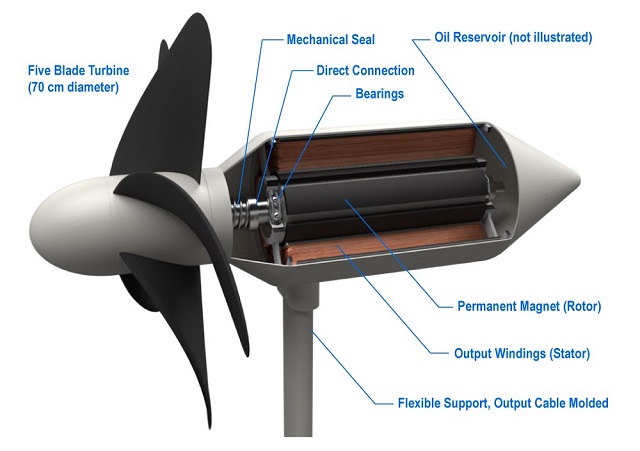 The blade design and materials are inspired by dolphin fins. They are flexible, and thus able to release stress rather than remain rigid and risk breakage. The supporting structure is also flexible, “like a flower,” Professor Shintake explains. “The stem of a flower bends back against the wind,” and so, too, do the turbines bend along their anchoring axes. The five-blade turbines are built to be safe for surrounding marine life. The blades rotate at a carefully calculated speed that allows animals caught among them to escape.

The blades are made of a soft material, and they rotate on their axis when influenced by ocean waves. The diameter of the turbine is about 0.7 meters. The axis is attached to a permanent magnet electric generator, which is the part of the turbine that transforms the ocean wave energy into usable electricity. The ceramic mechanical seal protects the electrical components inside of the body from any saltwater leakage. This design allows the turbine to function for 10 years before it need replacing.

Shintake and his team are preparing to install the turbines - half-scale models, with 0.35-meter diameter turbines - for their first commercial experiment. The project includes installing two wave energy converter turbines that will power LEDs for a demonstration.

“I’m imagining the planet 200 later,” Shintake says. “I hope these [turbines] will be working hard quietly, and nicely, on each beach on which they have been installed.” 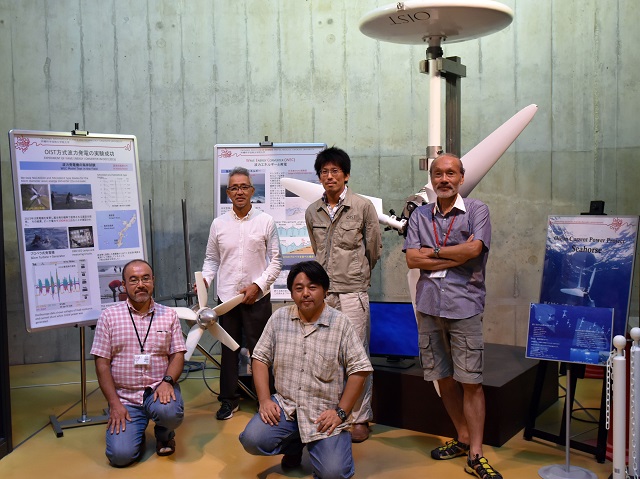