Iranian Forces Seize One UK-Operated Tanker and Board Another

UK shipowner Stena Bulk reports that the UK-flagged product tanker Stena Impero has dropped out of contact and headed towards Iran after she was approached by a helicopter and several small craft in the Strait of Hormuz. A second vessel, the UK-operated Mesdar, was boarded briefly but was allowed to continue her journey.

"Stena Bulk and Northern Marine Management can confirm that at approximately 1600 BST on 19th July UK registered vessel Stena Impero (built 2018, 49,683 DWT) was approached by unidentified small crafts and a helicopter during transit of the Strait of Hormuz while the vessel was in international waters," Stena said in a statement. "We are presently unable to contact the vessel which is now heading north towards Iran."

In a statement, Iran's Islamic Revolutionary Guard Corps (IRGC) confirmed that its naval forces have seized the Impero. "UK tanker ship, Stena Impero, has been detained by the vessels unit of the IRGC Navy's First Naval Zone at the request of the Ports and Maritime Organization's office of Hormuzgan province for disregarding international maritime rules and regulations as it was passing through the Strait of Hormuz this afternoon," IRGC said. The organization said that the Impero would be handed over to Iran's Ports and Maritime Organization for an investigation.

An unnamed source told Fars that "the British ship had switched off its tracking systems in violation of maritime rules and regulations and was making an entry from the exit point of the Strait of Hormuz in the south, disregarding the established procedures that require all entries be made through the northern pass." The northern portion of the strait is administered by Iran.

The Stena Impero's last received AIS transmissions indicates that she was making 13 knots towards the Iranian island of Qeshm, a center of activity for the Iranian Revolutionary Guard Corps. 23 seafarers are aboard the Impero, and the UK foreign ministry said Friday that none of them are British citizens. Stena and ship manager Northern Marine Management said that the safety and welfare of the crew is their top priority.

The administration of UK prime minister Theresa May convened an emergency cabinet meeting and is discussing response measures. “We’re not looking at military options; we’re looking at a diplomatic way to resolve the situation,” said British foreign minister Jeremy Hunt on Friday afternoon. “But we are very clear that it must be resolved.”

Maritime security consultancy Dryad Global said in a client advisory that it is likely that the UK will increase its naval presence in the Persian Gulf region in response. "Dryad have received unconfirmed reports that in addition to HMS Montrose already within the Persian Gulf and HMS Duncan en-route from the Mediterranean, the UK is considering the deployment of HMS Kent currently in Portsmouth and the support vessel RFA Wave Knight, currently in the Western Mediterranean," Dryad wrote.

On Friday, American officials told media that Iran may also have seized the UK-managed VLCC Mesdar, which turned north towards Iranian waters at about the same time as the Impero's seizure. The Mesdar's operator, Glasgow-based Norbulk, said that the vessel was boarded by armed personnel at approximately 17:30 BST on Friday. The operator briefly lost contact with the vessel, but it re-established communication later in the day and received positive news. The master confirmed that the armed guards have departed and that the vessel was allowed to continue her voyage. The Mesdar's crew are safe and well, Norbulk said.

Fars News reported that Iranian forces allowed the Mesdar to continue her voyage after she was "warned to show full respect for environmental regulations and harmless navigation." On Friday night, AIS data confirmed that the Mesdar was under way once more, bound westward and making 13 knots. 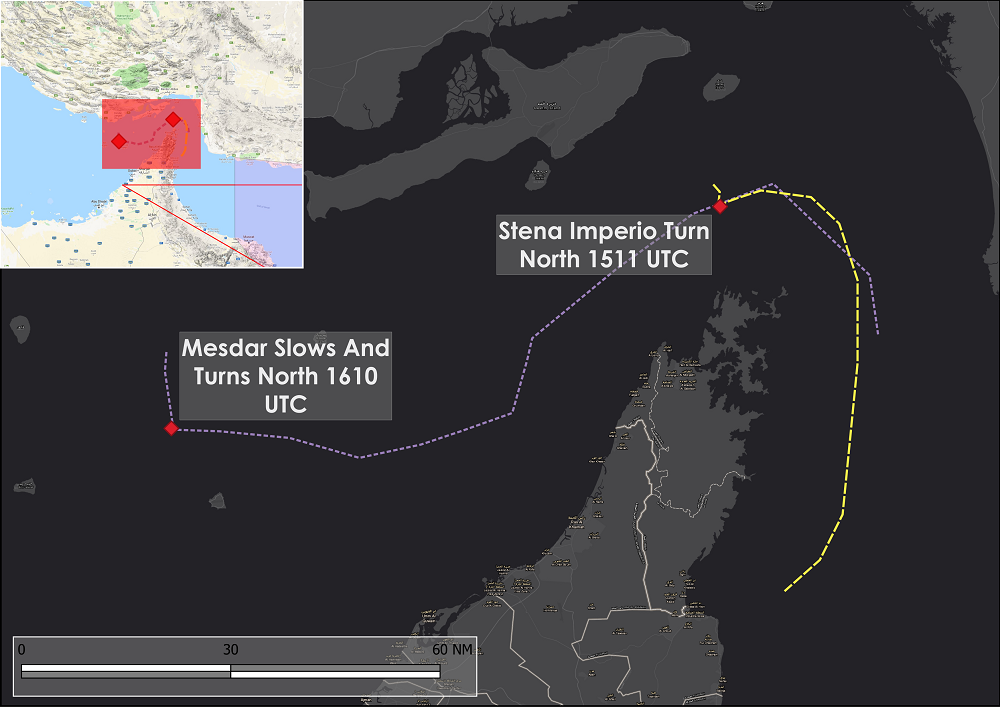 The AIS tracklines for the Mesdar and the Stena Impero (Dryad Global). [The product tanker's name has been widely misreported as the "Stena Imperio."]

Senior Iranian officials have recently called for the IRGC to capture a British tanker in retaliation for the UK's seizure of the Iranian-controlled VLCC Grace 1. The IRGC's boarding of the Impero followed shortly after a court in Gibraltar moved to extend the Grace 1's detention by an additional month; the UK contends that the Grace was carrying 2.1 million barrels of light crude to a refinery in Syria in violation of EU sanctions on the Syrian government.

The Impero and Mesdar are the second and third tankers that the IRGC has boarded this week. In an apparently unrelated move last weekend, IRGC units seized a small Panama-flagged product tanker - the Riah - on suspicion of fuel smuggling, a common criminal activity on Iran's borders.

The U.S. and the UK also accuse Iran of staging attacks on six merchant tankers off the coast of the UAE in May and June. Iran denies involvement in those earlier incidents.