On April 28, an Indonesian consortium led by state-owned defense corporation PT Pindad launched a prototype of the locally built “Tank Boat” catamaran gunboat in the waters off Banyuwangi, East Java.

The Tank Boat is derived from the platform X18 of Indonesian boatbuilder PT Lundin Industry Invest. In 2014, PT Lundin unveiled a design for the 18-meter vessel, and it has joined forces with state owned defense corporation PT Pindad, electronics group PT Len and engineering firm PT Hariff to develop the concept. At the Indo Defense 2016 exhibition in Jakarta, a full-scale mock-up of the vessel was first made public.

The vessel is unique for its turret-mounted cannon, and it is primarily intended for use in “brown water” operations in Indonesia, and it is large enough to carry more than an Indonesian Army platoon. Turret gun options include the Cockerill 105mm cannon, a 30mm autocannon, or a Belgian CMI Defense rifled 105mm cannon – powerful weapons typically found aboard tanks, not patrol boats. 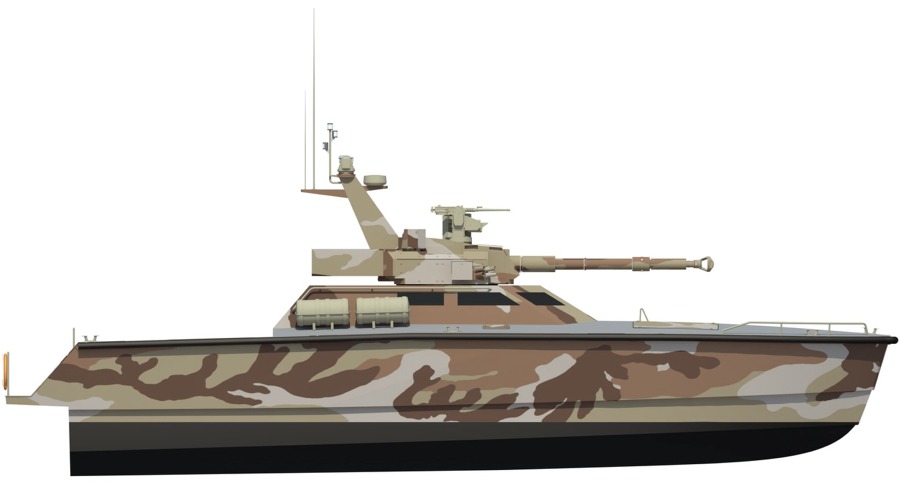 The first prototype, with a 30mm cannon (PT Lundin)

PT Pindad said on April 29 that it hopes that the Tank Boat will assist the Indonesian Army [TNI] in performing patrols along the oceans, rivers, and coasts of Indonesia and also to support coast guard operations. It is also designed to provide short- and long-range fire support when required.

The boat tank is fitted with a pair of 1,200 hp MAN V8 engines and MJP450 hydro jets, which can carry it to a maximum speed of 40 knots. The vessel can cover transit ranges of up to 600 nautical miles at nine knots and can carry up to 60 soldiers, according to PT Pindad.