Back in December 2016, the 3,800-tonne Indian Navy missile frigate INS Betwa capsized on her port side, killing two and injuring 14 others due to a loss of stability while undocking. Salvors Resolve Marine Group have now righted the vessel.

Resolve was contracted to conduct an immediate dive survey, then to stabilize, block and support the vessel to allow the drydock to be fully dewatered. Working alongside the Indian Navy, crews inspected all compartments of the vessel, then proceeded to patch and repair all damages, and secure all openings.

With a sophisticated engineering plan in place, salvage teams were able to complete extensive repairs to the internal tanks as well as the side shell of the vessel. By systematically flooding and pumping compartments, the vessel was rolled upright and done so without the use of any external lifting force.

The entire salvage operation was concluded in less than two months and required complex hydrodynamic calculations and the use of intricate measuring and monitoring systems.

The news of the vessel’s righting comes as a board of inquiry constituted to investigate how the INS Betwa toppled found that human error had led to the accident. The incident is reported to have occurred due to a miscalculation of the load distribution equilibrium.

INS Betwa is expected to be operational by April 2018. 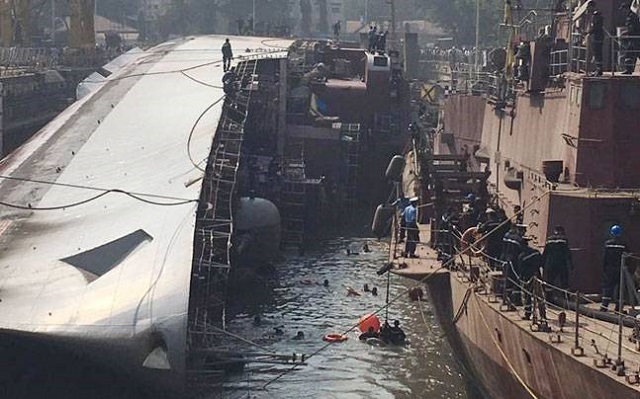