Knut Utstein Kloster, one of the true pioneers of the modern cruise industry, passed away on September 20, 2020 at the age of 91.

In the 1960s, he built a deluxe ferry called the Sunward and took a chance on converting his family's shipping company into passenger shipping. With that small ship he would modernize cruising from the port of Miami and launch the modern cruise industry. His efforts became Norwegian Caribbean Lines (today's Norwegian Cruise Line) and they would pioneer many elements of modern cruising, including the industry's first private island, the first mega cruise ship, the ss Norway, and the first weekly cruises to the Western Caribbean. Later he would pursue his vision of world unity proposing a 250,000 cruise ship called the World City. While it was never built, concepts included in the design would appear in many of the cruise ships that would follow, including Royal Caribbean International's mega ship the Oasis of the Seas. Kloster continued to dream of building the World City to the end of his life.

A kind and humble individual, Kloster was one of the true visionaries of modern cruising. In tribute to his life and legacy, we are re-running a profile of Knut Kloster from the January/February 2017 edition of The Maritime Executive. 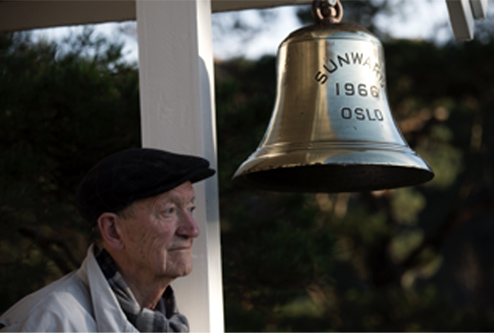 Celebrating a 50-year vision of innovation and change by the man who helped start it all.

Fifty years ago the cruise industry was in its infancy when Knut Utstein Kloster, a third-generation Norwegian shipping executive, made the auspicious decision to diversify his family business. In doing so he would lay the foundation for the modern cruise industry with the establishment of Norwegian Caribbean Lines, later renamed Norwegian Cruise Line, and introducing many firsts. With his strong humanist beliefs, Kloster also saw the potential for the industry to go far beyond just creating carefree holidays.

Barely 30 when his father died, Knut Utstein Kloster, an engineering graduate from the Massachusetts Institute of Technology, suddenly found himself a Managing Director of his family’s 55-year-old Norwegian shipping firm, Klosters Rederi A/S, which operated bulk cargo ships and tankers. Shortly thereafter he leaped at the opportunity to launch a first-of-its-kind weekly passenger/car ferry service between England, Spain and Gibraltar. It was a risky investment, but Kloster believed there was enormous untapped potential in vacation travel.

Commissioned in June 1966, the Sunward was a revolutionary 8,666-gross-ton ship. Designed for long-haul ferry service, she featured a new level of luxury including accommodations for 558 passengers in cabins with private baths, restaurants, bars, a nightclub, theater and shopping arcade as well as an air-conditioning system able to handle the tropics.

She was a “happy ship” due in part to Kloster’s emerging business philosophy. He would become known for the good working environment on his ships, which on the Sunward included thirty female crew members with twelve of them married and working alongside their husbands.

The Sunward’s success, however, was short-lived as that fall Britain imposed currency restrictions on foreign travel while in a geopolitical dispute Spain closed its border with Gibraltar. With an uncertain future, the Sunward returned to Norway for guaranty work before planned winter trips from England to Casablanca and Gibraltar. 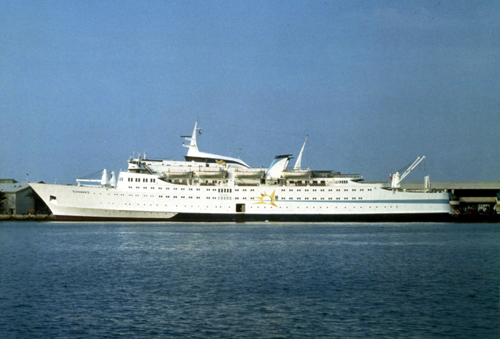 It was then that possibly one of the most fortuitous events in the nascent industry took place. A shipping agent named Ted Arison, desperate after losing the Israeli car ferry he was marketing on cruises to the Bahamas, made a now famous pitch call suggesting that the Sunward come to Miami. “My first impressions of Miami and the port were reassuring,” recalls Kloster, “I was impressed with Port Director Admiral Stevens and his plans for development. The timing was right. Sunward should come.”

In a matter of days a deal was struck, and the agreement between the Arison Shipping Company and Klosters Rederi set the stage for cooperation between American sales and marketing and Norwegian ship operation. In time, it would be replicated by other cruise pioneers.

On December 19, 1966, the Sunward sailed on her first trip to Nassau, and while she was neither Miami’s first cruise ship nor the first in regular service to the Bahamas, she was an immediate success. “I woke up in the morning, looked out the window and was captured by the beautiful greenish-blue Bahamian water outside,” recalls Kloster, and soon scores of vacationers would be enjoying that same experience. The Sunward was so successful – she carried nearly 40,000 passengers in her first year – that after just six months a second car-ferry was ordered and launched in 1968 as the Starward.

“The biggest challenge in building the business in those early years was having happy passengers go home and talk about it,” recalls Kloster. They marketed cruising to Middle America as an attractive vacation alternative, positioning it as “good value for the money.” And it worked.

With the first two ships sailing at 90 percent of capacity, NCL’s third ship, the Skyward, entered service in 1970 with cabins replacing her car decks to increase capacity to 920 passengers. She was followed the next year by NCL’s fourth ship, the 16,600-gross-ton Southward, which would sail 14-day cruises to ten Caribbean ports.

In just five years NCL had built a fleet able to carry more than 150,000 passengers annually, but a financial dispute with the Italian shipyard caused them to abandon the Southward’s incomplete sister ship. Then the partnership descended into acrimony, leading to Arison’s dismissal at the end of 1971. He took his team to start Carnival Cruise Lines while Kloster moved to Miami to oversee NCL’s operations. 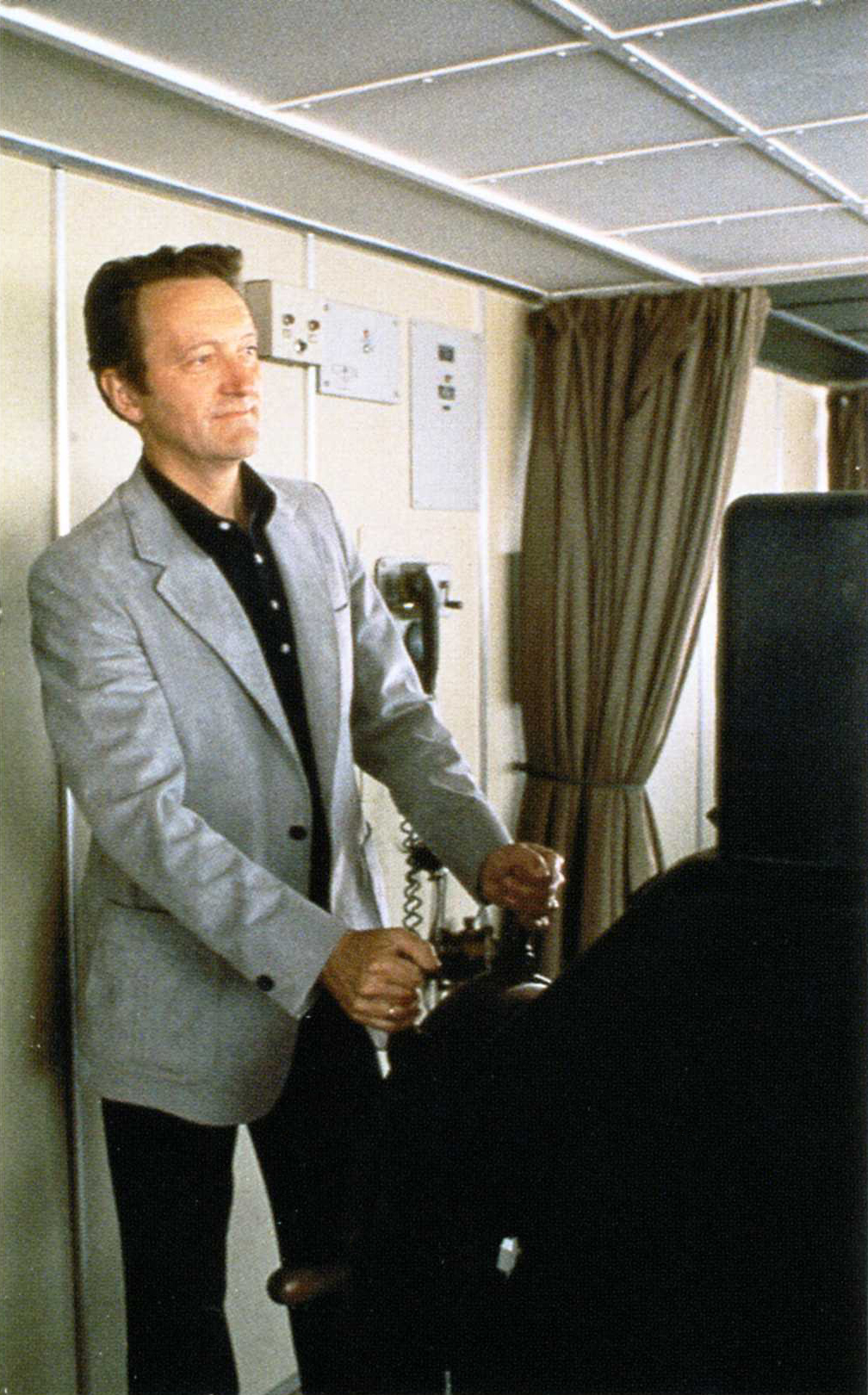 “Knut Kloster liked NCL’s reputation as a company of innovation,” recalls Bruce Nierenberg, who joined the firm in 1973 as part of a new sales team drawn largely from the airline industry. “Knut let people settle in and gave us room to try new ideas.” The result was a series of initiatives that would again revolutionize cruising.

Like many in the cruise industry, NCL had been experimenting with fly-cruise vacations using charter flights and supplemental carriers from major cities. Drawing on their airline experience, the new NCL team launched the industry’s first comprehensive national air/sea program using scheduled carriers, aptly named “Cloud 9 Cruises,” and opened a sales office in London to sell fly-cruise vacations from Europe.

It also began experimenting with new destinations. In the summer of 1975 the Southward launched the first regularly scheduled seven-day cruises to Cozumel and Grand Cayman and by 1977 was sailing year-round to the “western Caribbean.” Passengers especially enjoyed NCL’s Grand Cayman beach party, and that helped spur yet another innovation – “Bahamarama Cruises,” launched on the newly acquired Sunward II with a stop at an uninhabited Bahamas Out Island. The private island was so popular that it was added to both the Southward and Starward’s itineraries and later would be copied by many other cruise lines.

As the cruise industry grew it spurred discussions across the Caribbean about the ramifications of tourism. These dialogues, and especially the work of Rex Nettleford, a Jamaican scholar and social critic, would strike a chord with the socially conscious Kloster: “In the early days we were reminded of the fact that the 150-year-old New Haven Railroad benefitted from seeing its business as communications rather than transportation.” And while that idea may seem far-fetched today, in the early 1970s Kloster began advocating “cruise ships as the nexus for establishing communications” among passengers, crew and island residents.

First among the initiatives was a people-to-people program designed to build cultural understanding. Herb Hiller, who was NCL’s Vice President of Public Affairs, recalls returning from a cruise aboard the Starward: “I had listened to this absolutely appalling talk telling the passengers what to ‘expect’ when they reached our first stop in Port Antonio.”

The civic-minded Hiller responded by designing the New Experiences Program for the Starward that hosted Jamaican families on the ship and had Jamaican crew members offer walking tours in the ports. The program, which resonated with Kloster, in time expanded to include both Haiti and the Bahamas. Forty years later, Kloster is still proud of this program, a forerunner of modern ecotourism.

Kloster next proposed the Elysian, a 20,000-gross-ton, semi-catamaran ship that would increase passengers’ understanding of the natural environment and the crew. The wide beam would provide greater stability and “allow greater inventiveness in the interior layout” with a variety of dining, entertainment, and recreation areas. Included were glass-walled viewing areas for the bridge and engine room, an underwater observatory, sky-viewing platform, spaces for passengers and crew to interact in social settings, and new technologies such as “automatic table selectors for meals.”

While the Elysian never made it off the drawing boards, she would contribute to Kloster’s next step: “We had to increase capacity as fast and effectively as we could to satisfy the growing demand. We looked at the laid-up former Italian liners. Interesting, but we landed in Le Havre for good reasons. The France was a masterpiece of construction and marine engineering.”

The maritime world was stunned when NCL acquired the 66,000-gross-ton, former French superliner, which was nearly three times the size of its current ships. Carrying 2,000 passengers a week, she became the industry’s first megaship, featuring a full-size theater for Broadway shows, star entertainment, glass-enclosed promenades with cafés, shops and street performers, and sports areas for an onboard Olympics. Emphasizing that the ship was the destination, her seven-day itinerary included only St. Thomas and the Bahamas Out Island.

On May 3, 1980, the newly converted and renamed Norway arrived in Oslo to a thunderous reception. That afternoon, with Norway’s King Olav in attendance, a special ceremony took place during which Wesley Samuels, a Jamaican-born senior steward who had started with NCL in 1966 as a cabin boy, hoisted the UN flag as special recognition of Kloster’s vision of the ship’s multicultural profile. The Norway became the ship everyone wanted to sail, proving the viability of the megaship concept. 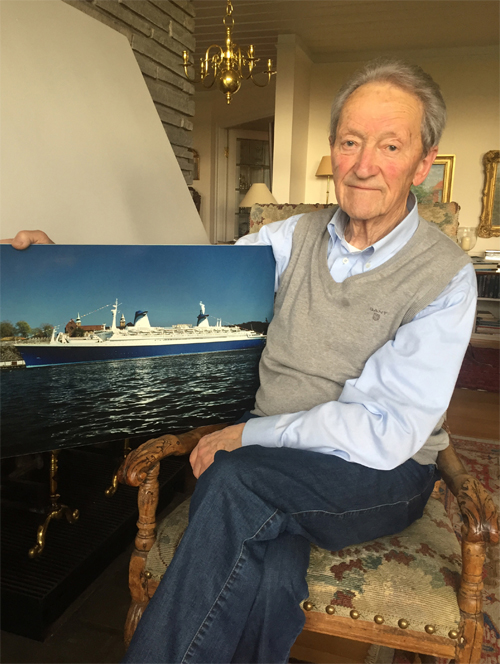 With the success of the Norway, Kloster’s vision progressed to the Phoenix, a 250,000-gross-ton ship accommodating 5,200 passengers in four multi-level hotels with private balconies. Amenities would include everything from 13 restaurants to a 2,000-seat theater, 30 shops in a city center, a planetarium, extensive spa and health facilities with tennis courts and ice skating, and a four-pool lagoon with sand beaches. The Phoenix would also incorporate Kloster’s broader vision with a university campus and meeting and exhibition spaces.

“After having successfully stretched its resources by transforming a traditional Norwegian family-owned shipping company into a pioneering cruise company, the plan was to go public,” says Kloster. However, the timing did not work with the financial markets, so in 1986 Knut Kloster stepped down to pursue the Phoenix concept and various other projects that raised social and environmental awareness. While his World City remains unrealized, many of its concepts were incorporated into cruising, and twenty years later the 225,282-gross-ton, 4,700-passenger Oasis of the Seas emerged.

“The cruise industry was an artist’s palette waiting to be painted,” says Nierenberg. “Knut Kloster fostered more innovative ideas than anyone else in the business.” Fifty years later they are still impacting the industry. 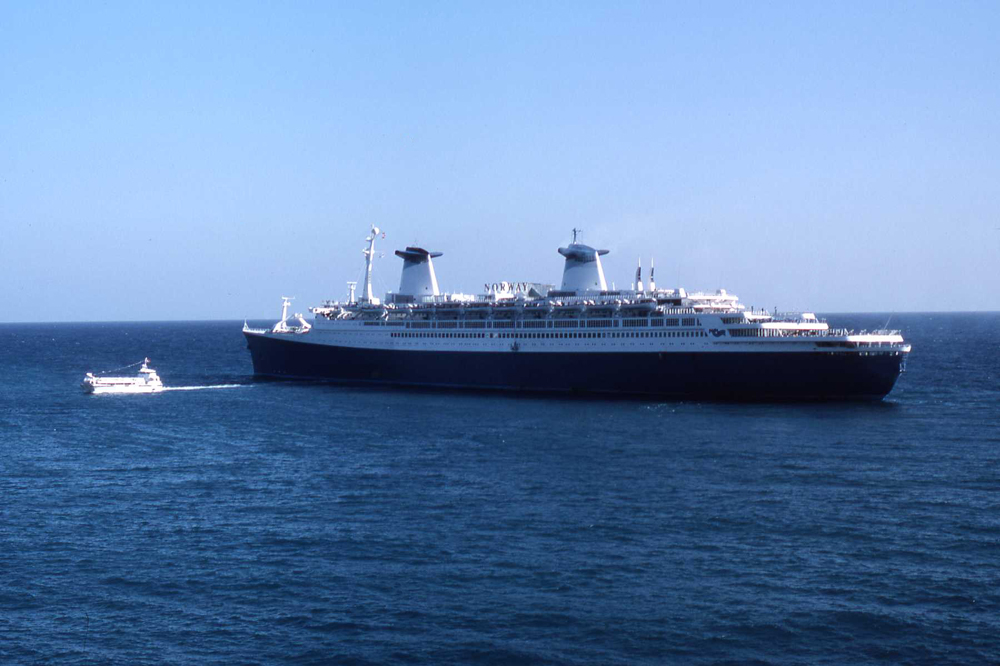