Piracy and armed robbery on the world’s seas was on the rise in the first nine months of 2020, according to a new report issued by the ICC International Maritime Bureau (IMB). They especially highlighted a dramatic increase of activity off West Africa while saying incidents in other areas including the Indonesian archipelago and off Somalia were down or remained under control.

Attacks on vessels so far in 2020 were fairly evenly split between tankers, bulk carriers, and container ships as well as other types of vessels. While vessels are rarely attacked at berth, the largest number of incidents are on vessels at anchor but there also was a significant number of assaults on vessels underway. 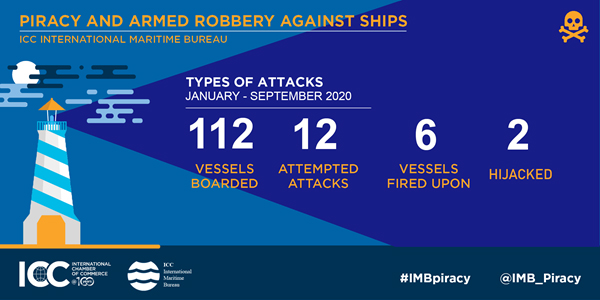 “Crews are facing exceptional pressures due to Covid-19, and the risk of violent piracy or armed robbery is an extra stress,” said Michael Howlett, Director of IMB, whose Piracy Reporting Centre (IMB PRC) has responded to reports and shared data since 1991, supporting seafarers and fishers worldwide. “While IMB liaises with authorities swiftly in case of a pirate attack, we encourage all Coastal states and Regional Cooperations to take responsibility for ensuring maritime security within their EEZ to achieve safer seas and secure trade.”

The rise of attacks reported in the Gulf of Guinea was especially significant. According to the IMB’s data, there was a 40 percent increase in the number of kidnappings reported in the Gulf of Guinea, compared with the same period in 2019. Pirates armed with guns and knives are abducting bigger groups of seafarers at further distances off the West African coast the report says.

With approximately 95 percent of global kidnappings reported from within the Gulf of Guinea waters, IMB warns that pirate gangs in the area are “well organized and targeting all vessel types over a wide range.”

The furthest attack from shore also involved the most crew kidnapped from a single vessel in 2020. Eight pirates armed with machine guns boarded a product tanker on July 17 underway approximately 196 nautical miles southwest of Bayelsa, Nigeria. They held all 19 crew members hostage, stole ship’s documents and valuable items, and escaped kidnapping 13 crew members. The tanker was left drifting with a limited and unqualified navigational and engine crew onboard. A nearby merchant vessel later helped the tanker to sail to a safe port. The 13 crew members were held for a month before they were released. 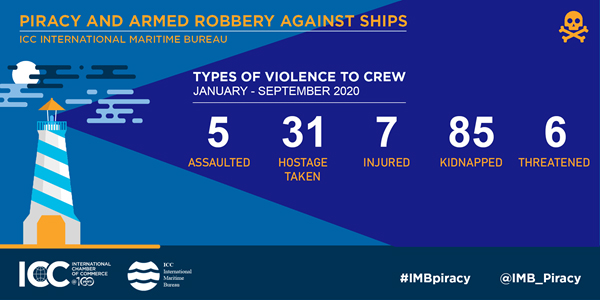 Beyond the Gulf of Guinea, the report also highlights a smaller but continued risk to crews in the Singapore Straits. A total of 15 ships were attacked underway in the areas with knives being used in at least 10 of the incidents. The IMB says that while most of these were low-level crimes, two crew were threatened, one injured and another taken hostage.

The report highlights a recent sharp decline in incidents in Indonesia. After 14 incidents during the second quarter of 2020, there were only four reports in the third quarter.  The IMB says that these are generally low-level opportunistic thefts on anchored vessels.

Somali piracy also remains under control with no incidents since 2018. The report further highlights that in August pirates freed the last three of the thousands of hostages who have been held captive in the region over the years since ship hijackings peaked in 2011. The IMB, however, cautions that Somali pirates are still capable of carrying out further attacks.

The IMB believes that many more incidents go unreported and highlights that vessels of all types are being targeted at anchor as well as underway in the Caribbean, Central, and South America. IMB urges all ship masters and operators to report any attacks to their vessels or crew promptly.