The classic transatlantic liner Queen Elizabeth 2 is now home to what may well be the world's largest floating nightclub, Float Dubai.

The famed QE2 served Cunard Line from 1968 to 2008, when she was sold to the government of Dubai's private-equity investment firm for use as a floating luxury hotel. Those plans were delayed for a decade due to the global financial crisis, but in 2018 - after a change in ownership, the removal of her propeller and 2.7 million man-hours of refurbishment - she reopened to the public at last.

This year, with COVID-19 lockdowns easing, a leading Middle Eastern investment group decided to change this mid-century icon's top deck into an ultra-modern nightclub. ICICB Group, an investment house with strong ties to Dubai's ruling family, has underwritten the creation of a nightclub with enough space for 1,000 patrons - far more than the capacity of nightclubs aboard most working cruise ships. 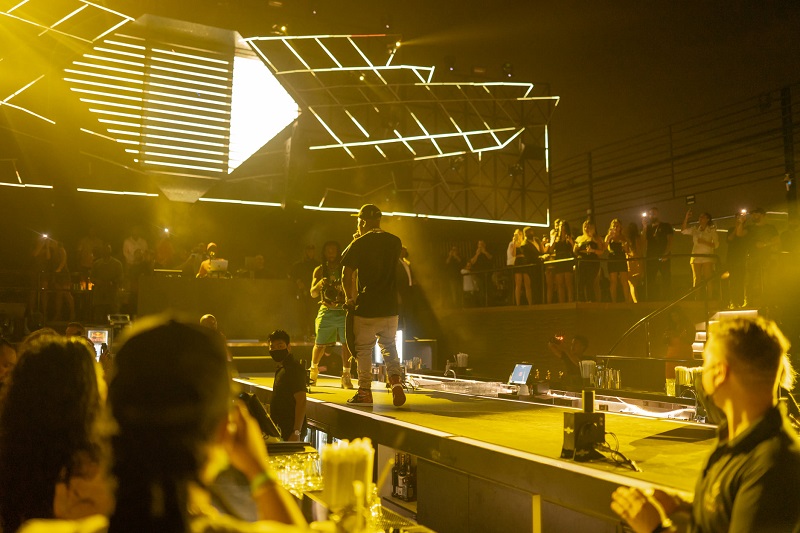 The party kicked off October 14-16 with a headline performance by rapper Jonathan Lyndale Kirk (aka DaBaby, above), who has achieved chart-topping commercial success in the United States.

Entry to Float Dubai is technically free, but the price for bottle service is high indeed: a reservation comes with a minimum take-or-pay alcohol purchase of $1,100, and the largest bottles of Dom Perignon go for more than $100,000, according to The Times.

Before her relocation to Dubai, the QE2 had a long and distinguished history in oceangoing service. She carried her first passengers to New York in 1969, and she was the last oil-fired steamship on the route, making her history a bookend for the classic transatlantic liner era.

In 1982, she was requisitioned to transport 3,000 troops for the UK in the Falklands War, and in 2002 she set a world record as the first merchant ship to pass five million nautical miles of total travel. As the market changed in the mid-2000s, she retired from the transatlantic liner route and entered service as a full-time cruise ship, with round-the-world and Mediterranean itineraries. However, changing SOLAS requirements meant that costly improvements would be required for her continued operation, and Cunard made the decision to sell her for pierside use - backed up with a carefully written "no-onward-sale" clause to prevent scrapping.